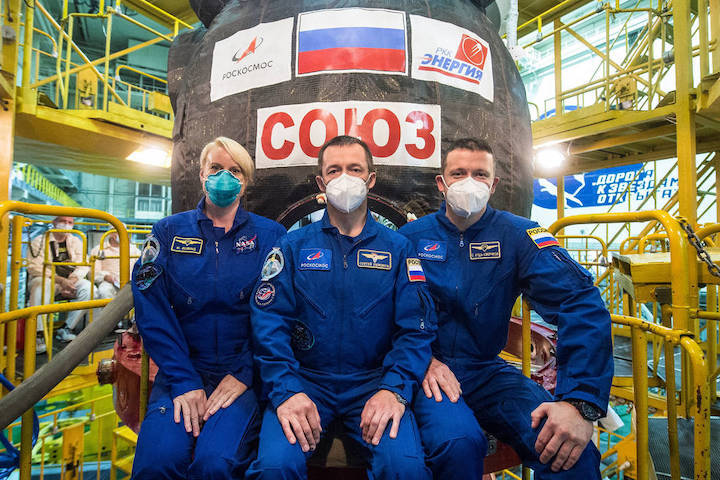 A trio of space travelers is poised to launch to the International Space Station from the Baikonur Cosmodrome in Kazakhstan on Wednesday, Oct. 14. NASA Television will provide comprehensive coverage of launch and docking.

Kate Rubins of NASA and Sergey Ryzhikov and Sergey Kud-Sverchkov of the Russian space agency Roscosmos are preparing to launch aboard the Soyuz MS-17 spacecraft Wednesday, Oct. 14, at 1:45 a.m. EDT (10:45 a.m. Kazakhstan time) on a two-orbit, three-hour journey to dock to the station’s Rassvet module for the start of a six-month mission on the orbital outpost.

Launch coverage on NASA Television will begin at 12:45 a.m. It will be the second flight for Rubins and Ryzhikov and the first for Kud-Sverchkov.

After their fast-track transit, the new crew members will dock to the station at 4:52 a.m. NASA TV coverage of rendezvous and docking will begin at 4 a.m. They will join Expedition 63 Commander Chris Cassidy of NASA and Roscosmos cosmonauts Anatoly Ivanishin and Ivan Vagner, who have been aboard the complex since April.

Less than two hours after docking, hatches between the newly arrived Soyuz spacecraft and the station will open, and the six crew members will greet each other. NASA TV coverage of the hatch opening will begin at 6 a.m. Cassidy, Ivanishin, and Vagner are scheduled to depart the space station and land on Earth on the steppe of Kazakhstan Wednesday, Oct. 21, U.S. time, in the Soyuz MS-16 spacecraft that brought them to the station on April 9.

A change of command ceremony is scheduled on Tuesday, Oct. 20. Although launching as part of the Expedition 63 crew, Rubins, Ryzhikov, and Kud-Sverchkov will become the Expedition 64 crew under Ryzhikov’s command upon the departure of Cassidy, Ivanishin, and Vagner.

The crew members of Expedition 64 will continue work on hundreds of experiments in biology, biotechnology, physical science, and Earth science aboard the International Space Station, humanity’s only permanently occupied microgravity laboratory.

Expedition 64 will also be onboard for the planned arrival of NASA’s SpaceX Crew-1 mission on Nov. 1, bringing NASA astronauts Mike Hopkins, Victor Glover, Shannon Walker, and Japan Aerospace Exploration Agency astronaut Soichi Noguchi to the space station aboard the Crew Dragon vehicle. This first operational mission of the Crew Dragon is scheduled to launch to the station Oct. 31, following a successful Demo-2 mission earlier this year.

Russia to deliver Soyuz rocket with manned spacecraft to Baikonur on Oct. 11

The carrier rocket with the manned spacecraft is scheduled to blast off from Site 31 of the Baikonur spaceport towards the International Space Station at 08:45 a.m. Moscow time on October 14

Russia’s state commission has made a decision to deliver a Soyuz-2.1a carrier rocket with a Soyuz MS-17 manned spacecraft to the Baikonur spaceport’s launch pad on October 11, the State Space Corporation Roscosmos announced on Friday.

"After hearing reports on the results of the tests, a decision has been made on the delivery on October 11," Roscosmos said.

The carrier rocket with the manned spacecraft is scheduled to blast off from Site 31 of the Baikonur spaceport towards the International Space Station (ISS) at 08:45 a.m. Moscow time on October 14. The next expedition’s crew members continue their preparations for the flight. In particular, they are scheduled to hold training on Friday to practice manual rendezvous with the ISS. The crew members are also undergoing medical check-ups every day.

When NASA’s Kate Rubins launches to the International Space Station (ISS) next Wednesday, she will become only the fifth American astronaut in history to do so on a birthday. Born in Farmington, Conn., on 14 October 1978, Rubins and her Russian crewmates—Soyuz MS-17 Commander Sergei Ryzhikov and Flight Engineer Sergei Kud-Sverchkov—will rise from Site 31/6 at Baikonur Cosmodrome in Kazakhstan, atop a giant Soyuz-2.1a booster, at 11:45 a.m. local time (1:45 a.m. EDT).

Assigned to this mission in June, Rubins has enjoyed one of the shortest training regimes of any ISS-bound expedition astronaut. She previously spent almost four months aboard the station during Expeditions 48 and 49 in the summer and early fall of 2016, during which time she logged more than 115 days in orbit and two sessions of Extravehicular Activity (EVA), totaling 12 hours and 46 minutes. Until earlier this year, Rubins also acted as NASA’s Director of Operations in Russia, based at the Star City cosmonauts’ training center on the forested outskirts of Moscow.

And as Rubins turns 42 that day, hers will be the first crew to trial a “super-fast” rendezvous and docking at the ISS. Faster by far than the two-day transits of yesteryear, and even faster than the six-hour and three-orbit approaches used by most Soyuz crews since March 2013, Rubins, Ryzikhov and Kud-Sverchkov will arrive at the station just three hours and two orbits after launch.

These “super-fast” rendezvous and dockings began with Russia’s unpiloted Progress MS-09 mission in July 2018, which reached the ISS only three hours and 40 minutes after its Baikonur liftoff. Since then, four more cargo ships—most recently Progress MS-15, which rose from Earth in July 2020—have followed similar profiles, achieving dockings as rapidly as only three hours and 19 minutes after launch.

Assuming an on-time liftoff of Soyuz MS-17, Rubins and her crewmates are due to dock at the Earth-facing (or “nadir”) port of the station’s Rassvet module at 4:52 a.m. EDT. This may produce an all-time record for a space station docking, bringing a piloted vehicle from the launch pad to its ISS berth in just three hours and seven minutes.

They will be welcomed aboard the station by Expedition 63 Commander Chris Cassidy and his Russian crewmates Anatoli Ivanishin and Ivan Vagner, who have been aboard since April and are due to return home late on 21 October after 195 days. And fast-track rendezvous and docking profiles are something Cassidy knows a thing or two about, for back in March 2013 he and his Soyuz TMA-08M crewmates Pavel Vinogradov and Aleksandr Misurkin reached the ISS in a then-record-setting six hours.

But although Cassidy and his crewmates may have a birthday surprise waiting for Rubins, it is unlikely to involve candles in the closed environment of the ISS. In fact, the biggest “candle” of the day is likely to be the blaze of the RD-108A first-stage engine and the RD-107A engines of the four tapering, strap-on boosters of the Soyuz-2.1a booster as it blasts away from Earth.

Although many Americans have celebrated birthdays in orbit—most recently Dragon Endeavour crewman Bob Behnken in July, for whom his wife, fellow astronaut Megan McArthur, provided chocolate cake—only four have so far actually launched on their birthdays. The first was Dick Truly, who turned 44 on 12 November 1981 when he and Joe Engle launched aboard Columbia at 10:09 a.m. EST for STS-2, the second mission of the Space Shuttle Program and the first reflight of a manned, orbital-class space vehicle.

Truly and Engle should have flown a few days earlier, but their launch was stalled by a problem with the shuttle’s Auxiliary Power Units (APUs). Another problem arose when one of four Multiplexer-Demultiplexers (MDMs) failed; a spare was fitted, but it too proved faulty, requiring a replacement to be flown from shuttle prime contractor Rockwell International’s facility in Palmdale, Calif., in the small hours of launch morning.

Truly’s birthday candles that morning came in the form of the three Space Shuttle Main Engines (SSMEs) and twin Solid Rocket Boosters (SRBs), which pushed the two men into orbit in under nine minutes. But theirs turned into a successful, if unhappy mission. Planned for five days, not long into the flight a failed fuel cell required them to return to Earth after only 54 hours. It initially manifested itself as a high pH level on the cell, but quickly deteriorated with a sharp drop in voltage, indicative of the failure of one or more fuel-cell “stacks”. This pointed to an impairment not only in the cell’s ability to generate electricity for the shuttle, but also, as a byproduct, drinking water.

“That’s not so good,” a dejected Truly told Mission Control, when they learned of their shortened mission. But the two men worked through much of their planned rest periods to complete a full plate of scientific research and demonstrations of Columbia’s Canadian-built Remote Manipulator System (RMS) mechanized arm. The shuttle returned safely to Earth on 14 November, touching down at Edwards Air Force Base, Calif.

It was almost exactly three years later, at 7:15 a.m. EST on 8 November 1984, when another launch-day birthday was observed. Turning 36 that morning, STS-51A Mission Specialist Dale Gardner and his four crewmates were tasked with deploying a pair of communications satellites and retrieving two others.

Palapa-B2 and Westar-VI had been launched by another shuttle crew in February 1984, but a problem with their boosters left them stranded in low-Earth orbit. During a spectacular rendezvous and two spacewalks by Gardner and fellow astronaut Joe Allen, both satellites were successfully recovered and brought back to Earth for refurbishment and reflight.

It was more than a decade later before another American celebrated a birthday with a ride to orbit. At 10:41 a.m. EDT on 7 August 1997, Kent Rominger turned 41 as Discovery launched STS-85, an ambitious mission to deploy and retrieve the Shuttle Pallet Satellite (SPAS)—laden with a battery of sensors to observe Earth’s atmosphere—and a multitude of scientific and technological experiments.

But it was a very human tragedy that had gotten Rominger into the pilot’s seat that day. STS-85’s original pilot, Jeff Ashby, requested reassignment to ground-based role in March 1997, following the cancer diagnosis of his wife and Rominger was drafted in to replace him. And despite ground fog at the Shuttle Landing Facility (SLF), which might have impaired the astronauts had a Return to Launch Site (RTLS) abort been necessary, Rominger and his crew speared for orbit on time.