The trans-Neptunian object Arrokoth, also known as Ultima Thule, which NASA’s space probe New Horizons passed on New Year's Day 2019, may have changed its shape significantly in the first 100 million years since its formation. In today's issue of the journal Nature Astronomy, researchers led by the Chinese Academy of Sciences and the Max Planck Institute for Solar System Research (MPS) suggest that the current shape of Arrokoth, which resembles a flattened snowman, could be of evolutionary origin due to volatile outgassing. Their calculations help to understand what the current state of bodies from the edge of the Solar System may teach us about their original properties. 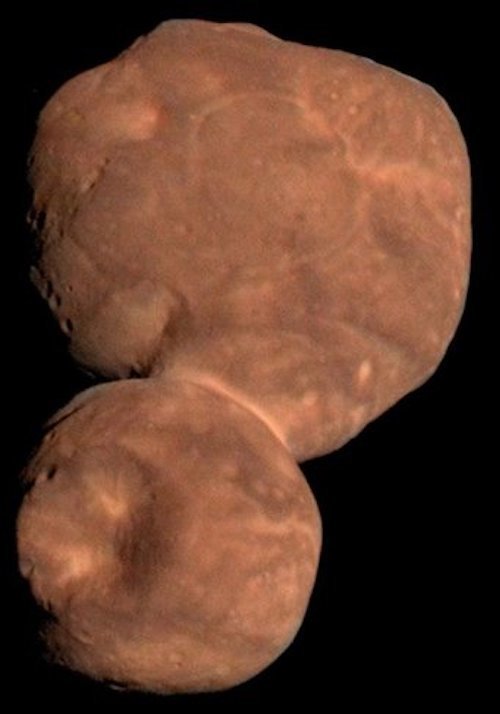 Arrokoth’s flattened shape can only be seen from a certain perspective. The first images returned by NASA’s New Horizons spacecraft gave the impression of a “normal” snowman-shaped object. Arrokoth’s surface is surprisingly smooth and displays only few craters.

The many millions of bodies populating the Kuiper Belt beyond Neptune's orbit are yet to  reveal many of their secrets. In the 1980s, the space probes Pioneer 1 and 2 as well as Voyager 1 and 2 crossed this region ? but without cameras on board. NASA’s spacecraft New Horizons sent the first images from the outermost edge of the solar system to Earth: in the summer of 2015 of dwarf planet Pluto and three and a half years later of the trans-Neptunian object Arrokoth, about 30 kilometers in size. Not yet officially named, the body was nicknamed Ultima Thule at the time, in reference to the northernmost land point on Earth. After all, the trans-Neptunian object is the body furthest away from the Sun that has ever been visited and imaged by a man-made probe.

Especially Arrokoth’s strange shape caused a sensation in the days after the fly-by. The body is a contact binary, believed to be a result of low velocity merging of two separate bodies that formed close together. It is composed of two connected lobes, of which the smaller one is slightly flattened, the larger one strongly so, creating the impression of a squashed snowman. In their current publication, the researchers from China, Germany, and the USA investigate how this shape came to be. A pronounced bi-lobed shape is also known from some comets. However, there is no other known body that is as flat as Arrokoth. Did Arrokoth already look like this when it was created? Or did its shape develop gradually?

"We like to think of the Kuiper Belt as a region where time has more or less stood still since the birth of the Solar System," explains Ladislav Rezac from MPS, one of the two first authors of the current publication. More than four billion kilometers away from the Sun, the bodies of the Kuiper Belt have remained frozen and unchanged, so is the common belief. New Horizon’s images of Arrokoth challenge this idea by its apparently smooth surface without signs of frequent cratering events and by its peculiar, flattened shape. Scientists assume that the Solar System was formed 4.6 billion years ago from a disk of dust: the particles from this nebula agglomerated into ever larger clumps; these clumps collided and merged into even larger bodies. "There is as yet no explanation as to how a body as flat as Arrokoth could emerge from this process," says Rezac.

Another possibility would be that Arrokoth had a more ordinary shape to begin with. It may have started as a merger between a spherical and an oblate body at the time of its creation and only gradually become flattened. Earlier studies suggest that during the formation of the Solar System, the region where Arrrokoth is located could have been a distinct environment in the cold, dust-shaded mid-plane of the outer nebula. The low temperatures enabled volatiles such as carbon monoxide and methane to freeze onto dust grains and compose planetesimals. When the nebular dust cleared after Arrokoth’s formation, solar illumination would have raised its temperature and hence rapidly driven off the condensed volatiles. Arrokoth’s strange shape would then be a natural outcome due to a favorable combination of its large obliquity, small eccentricity and mass-loss rate variation with solar flux, resulting in nearly symmetric erosion between north and south hemispheres.

"For a body to change its shape as extremely as Arrokoth, its rotational axis needs to be oriented in a special way”, Rezac explains. Unlike Earth’s rotational axis, Arrokoth’s is almost parallel to the orbital plane. During its 298 year orbit around the Sun, one polar region of Arrokoth faces the Sun continuously for nearly half the time while the other faces away. Regions at equator and lower latitudes are dominated by diurnal variations year round. “This causes the poles to heat up the most, so that frozen gases escape from there most efficiently resulting in a strong mass loss," says Yuhui Zhao from the Purple Mountain Observatory of the Chinese Academy of Sciences. The flattening process most likely occurred early in the evolution history of the body and proceeded rather quickly on a timescale of about one to 100 million years during the presence of super volatile ices in the near subsurface layers. In addition, the scientists self-consistently demonstrated that the induced torques would play a negligible role in the planetesimal's spin state change during the mass loss phase.

“How many of such ‘flattened snowman’ bodies are in the Kuiper Belt depends primarily on the probability of a body having a spin-axis inclination similar to Arrokoth’s and on the amount of super-volatile ices present near its subsurface”, Rezac says. There are reasons to believe that even objects like Arrokoth had considerable amounts of super-volatiles that have escaped during its early evolution. For instance, Pluto, due to its size and stronger gravity retains carbon monoxide, nitrogen and methane gasses even today. In the case of smaller bodies, these volatiles would long have escaped into space.

Snapshots from numerical simulation of shape evolution of Arrokoth’s analogue due to sublimation driven mass loss. The… END_OF_DOCUMENT_TOKEN_TO_BE_REPLACED

Astronomie - Flattening of a snowman Only in the course of several million years did the trans-Neptunian object Arrokothn acquire its bizarre, pancake-flat shape
« Zum vorherigen Eintrag Zum nächsten Eintrag »
514 Views
Created with page4