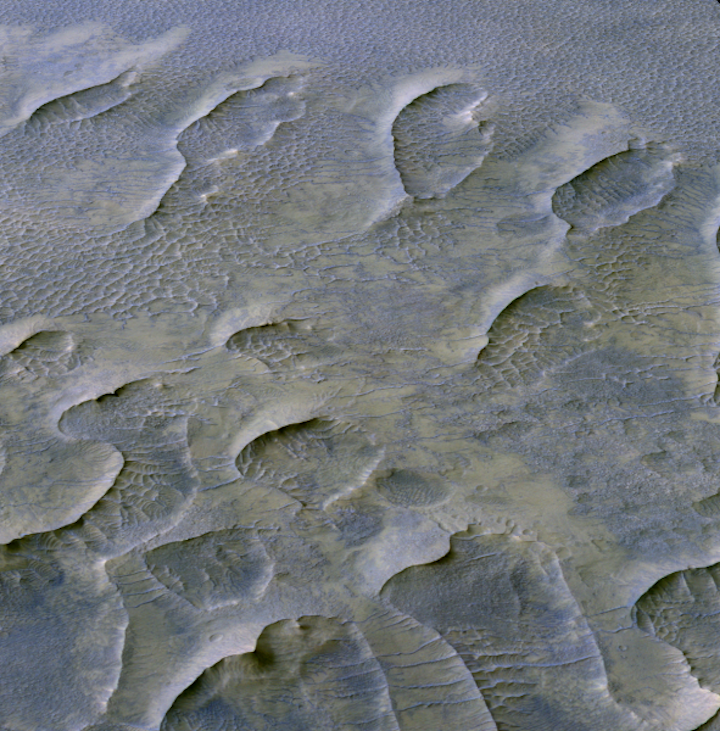 Wind-driven sand dunes are common on modern Mars and the presence of certain sedimentary rock layers indicates these landforms occurred there in the past. This oblique color view from NASA’s HiRISE instrument shows a lithified field of sand dunes within Melas Chasma, Valles Marineris. The large degree of preserved morphology for many of these paleo-dunes reveals important information regarding the acting wind regime and climate prior to their cementation. Credit: NASA/JPL/University of Arizona.

The discovery of Martian dune fields largely preserved in the rock record for up to a billion years offers new insights on past climatic conditions on Mars.

While modern sand dunes and other wind formed features are common on the surface of Mars and other terrestrial planets, typically most of the deposits are worn away by erosion. The dune fields studied in the paper are approximately 1 billion years old, Chojnacki said. He is lead author on “Ancient Martian Aeolian Sand Dune Deposits Recorded in the Stratigraphy of Valles Marineris and Implications for Past Climates” (https://agupubs.onlinelibrary.wiley.com/doi/10.1029/2020JE006510) that appears in Journal of Geophysical Research Planets.

“We identified and mapped extensive dune fields in the canyons of Valles Marineris which show clear evidence for lithification and burial. This level of preservation is rare for terrestrial sand dunes due to ongoing erosion and tectonics,” Chojnacki said. “Based on the dune deposit’s relationships to other geologic units and modern erosion rates we estimate these to be roughly a billion years old.  Because of the duneforms’ size and spatial arrangements, which are not that much different to modern equivalents, we suggest that the climate and atmospheric pressure to have been similar to that of contemporary Mars.”

Surface erosion and landscape evolution are greatly different on Earth and Mars. “Water and tectonics that constantly reshape the surface of Earth are not currently a factor on Mars, thus there is an opportunity to learn from the geologic record of the red planet,” Chojnacki said. “The ancient dune fields found within Valles Marineris, with their complex variety of landform shapes, degree of preservation, and context, reveal the richness of regional geology. These results inform us that wind-driven sand transport, deposition, and lithification have occurred throughout much of Mars’ recent history and illustrate how landscape evolution there greatly differs compared to that of Earth.”

Chojnacki’s research was funded by a grant from NASA Mars Data Analysis Program to the Planetary Science Institute.