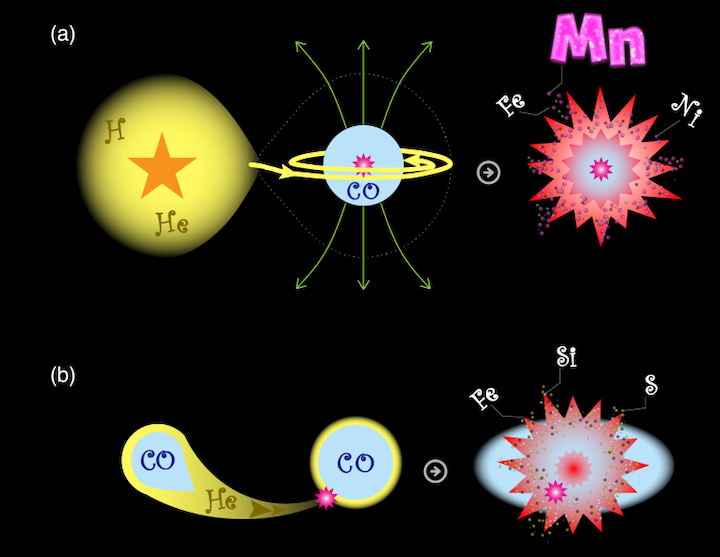 A research team at the Kavli Institute for the Physics and Mathematics of the Universe (Kavli IPMU) consisting of Visiting Scientist Chiaki Kobayashi, Project Researcher at the time Shing-Chi Leung (currently at the California Institute of Technology), and Senior Scientist Ken’ichi Nomoto have used computer simulations to follow the explosion, nuclear reaction, production of elements, and evolution of elemental abundances in galaxies. As a result, they placed stringent constraints on the origin of Type Ia supernovae.

“As usual for normal supernovae, Type Ia supernovae produce “metals”—or, in astronomical terms, chemical elements heavier than hydrogen and helium, the latter pair tracing their origin to the Big Bang—but Type Ia supernovae produce different elements, such as manganese (Mn), nickel (Ni), and iron (Fe). These elemental abundances can be measured in spectral features of nearby stars, which keep a “record” of supernovae from the past, like fossils do in archaeology,’’ Kobayashi, who is also an associate professor at the University of Hertfordshire in the United Kingdom, said. Therefore, the evolution of elemental abundances in galaxies can provide a stringent constraint on the true origin of Type Ia supernovae.

The progenitor stars of Type Ia supernovae are a type of white dwarf that are made of carbon and oxygen. White dwarfs form after the deaths of intermediate-mass stars, where electron degeneracy pressure supports the star against collapsing under its own gravity. However, if a white dwarf exceeds its upper mass limit—also called the Chandrasekhar mass limit (named after physicist Subrahmanyan Chandrasekhar)—this leads to nuclear reactions that cause it to explode.

Therefore, in a binary system containing a near-Chandrasekhar-mass white dwarf, mass accretion from a companion star can cause an explosion, which is one of the two proposed scenarios (the “single degenerate scenario”) for Type Ia supernovae (Figure 1a). In the other scenario, two white dwarfs are formed in a binary system (the “double degenerate scenario”), which merge together to cause an explosion—namely, a sub-Chandrasekhar-mass explosion (Figure 1b). 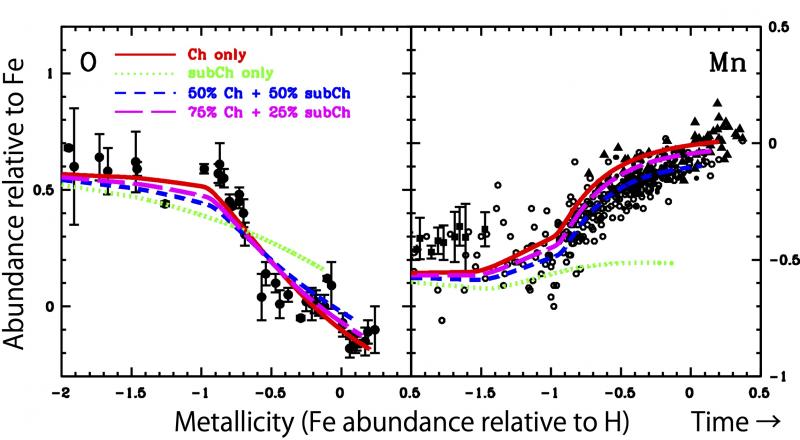 Image caption 2: Evolution of oxygen (left) and manganese (right) in the solar neighborhood of the Milky Way Galaxy. The x-axis shows the metallicity (iron abundance relative to hydrogen), which is a proxy of time increasing from the left to right. The y-axis shows the oxygen and manganese abundances, relative to iron. The points are for the elemental abundances observed in nearby stars with high-resolution spectroscopy. From the comparison, it is found that at least 75 percent of Type Ia supernovae are near-Chandrasekhar mass ex-plosions.

To investigate both cases, the research team run detailed calculations (2-dimensional hydrodynamical simulations and nucleosynthesis) of both near-Chandrasekhar-mass and sub-Chandrasekhar-mass explosions, and calculated the evolution of the Milky Way Galaxy, something that had not been done in previous research.

“Between these two cases, we find a critical difference in the evolution of elemental abundances, in particular for the element manganese,’’ Kobayashi explained. In the first simulation, the explosion provided high-temperature and high-density matter where a lot of manganese was produced, while in the second simulation, there was no such matter and hence not enough manganese was produced.

The research team then incorporated the production amount of each chemical element into their galaxy model to predict the evolution of elements in the Milky Way. Compared to observational data, namely, elemental abundances measured in nearby stars with high-resolution spectroscopy, they found that at least 75 percent of Type Ia supernovae are near-Chandrasekhar mass explosions (Figure 2). In both cases, the research found, the produced iron mass is roughly the same—that is, 60 percent of the mass of the Sun—which is about 10 times larger than in normal supernovae from massive stars.

“The chemical evolution of galaxies is powerful for solving long-standing problems in nuclear astrophysics. Not only manganese but also nickel abundances are updated in our calculations with the latest nuclear reactions. Nickel was overproduced in previous calculations, but now the predicted abundance is consistent with observations,’’ Kobayashi added. As a result of their findings, the nickel overproduction problem is finally solved, after two decades of studies.

Kobayashi and her team noted that the elemental abundances of millions of stars will be obtained with ongoing and future international projects, such as APOGEE (Apache Point Observatory Galactic Evolution Experiment), HERMES-GALAH (GALactic Archeology with HERMES), WEAVE (WHT Enhanced Area Velocity Explorer), 4MOST (4-metre Multi-Object Spectroscopic Telescope), MSE (The Maunakea Spectroscopic Explorer), in the new research area of “Galactic Archaeology,” or the study of the history of the Milky Way Galaxy, and their findings will be tested further in future research.