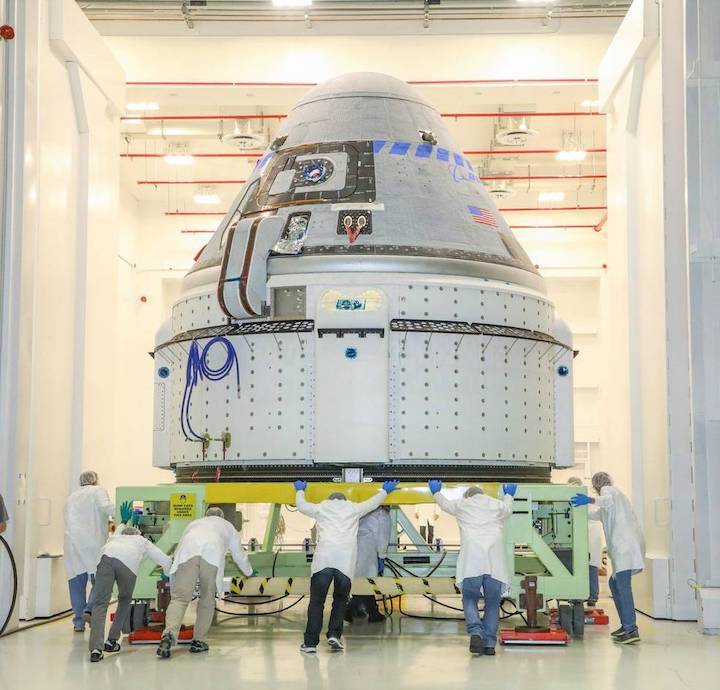 The CST-100 Starliner spacecraft to be flown on Boeing’s Orbital Flight Test (OFT) is viewed Nov. 2, 2019, while undergoing launch preparations inside the Commercial Crew and Cargo Processing Facility at Kennedy Space Center in Florida.
Credits: Boeing

NASA and Boeing continue to make progress toward the company’s second uncrewed flight test of the CST-100 Starliner spacecraft prior to flying astronauts to the International Space Station as part of NASA’s Commercial Crew Program. 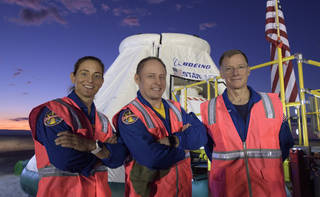 Over the summer, Boeing’s Starliner team focused on readying the next spacecraft for its upcoming flight tests as well as making improvements identified during various review processes throughout the beginning of the year. NASA also announced an additional crew assignment for its first operational mission, NASA’s Boeing Starliner-1, with astronauts to the space station. Here’s more on the recent progress:

Teams from Boeing are well into final assembly of the crew and service modules that will fly OFT-2 to the space station inside of the company’s Commercial Crew and Cargo Processing Facility (C3PF) at NASA’s Kennedy Space Center in Florida. OFT-2 will fly a new, reusable Starliner crew module providing additional on-orbit experience for the operational teams prior to flying missions with astronauts. For Boeing’s Commercial Crew missions, the Starliner spacecraft will launch atop a United Launch Alliance Atlas V rocket.

With the majority of assembly complete, recent progress is focused on the NASA docking system re-entry cover, which was added to the design for additional protection of the system. The team also has completed the installation of the Starliner propellant heater, thermal protection system tiles and the air bags that will be used when the spacecraft touches down for landing. As final production activities continue to progress, the crew module recently entered acceptance testing, which will prove out the systems on the spacecraft before it’s mated with its service module.

In Houston, the software team is nearing the final stages of modifying and re-verifying the flight code after the first uncrewed flight test. As part of that effort, the team recently began a major milestone called Formal Qualification Testing, which is a comprehensive test of flight software and an important step in preparing for an end-to-end mission rehearsal test.

Boeing also remains focused on incorporating the recommendations from the joint NASA-Boeing Independent Review Team with almost 75% of the 80 proposed actions implemented. The independent team was formed to review anomalies experienced during OFT, which led to Starliner not reaching its planned orbit or docking to station as planned, and to provide recommendations to ensure a robust design for future missions. In addition to opting to re-fly its uncrewed flight test, Boeing elected to comprehensively implement all of the recommendations provided by the review team.

Following a successful OFT-2, Boeing will focus full attention on preparations for its final flight test with astronauts and is already completing work on the Crew Flight Test spacecraft in parallel. Teams continue refurbishing the crew module flown on Starliner’s first uncrewed flight test for reuse with astronauts. After removing and conducting checkouts on various systems and flight hardware, Boeing is preparing to reassemble the vehicle for flight. Soon, outfitting of the crew module’s interior will begin along with packing parachutes and airbags ahead of installation. The vehicle’s NASA Docking System has been modified to accommodate the new cover, and outfitting of subsystem components continues on the spacecraft’s brand new service module.

In advance of the OFT-2 mission, flight control teams from NASA and Boeing completed an integrated launch-to-docking simulation in August with additional mission simulations on the horizon as the teams fine-tune flight rules and procedures.

In addition to training for living and working on station, astronauts continue to work closely with Starliner test teams. Several crew members plan to participate in ongoing acceptance testing of the OFT-2 crew module inside the C3PF.

Recently, the CFT crew helped test software updates with real flight hardware in Boeing’s Avionics and Software Integration Lab in Houston. They practiced performing manual separation events for several low likelihood contingencies, demonstrating the software improvements had no adverse effect on controls needed to stay safe in any situation. The crew also participated in procedural dry runs for future life support tests with the Starliner spacecraft in Florida. Later this year, the CFT crew will be suited inside the spacecraft with the vehicle providing all of their life support.

NASA astronauts Sunita Williams, Josh Cassada and Jeanette Epps are crew members of the Starliner-1 mission. Cassada and Williams were both selected for the mission in August 2018, and NASA announced Epps’ assignmentAug. 25.

Astronauts for both CFT and Starliner-1 missions regularly participate in rehearsals of launch and mission operations in both normal and emergency scenarios. They also are continuing with on-going mission-specific training for life in orbit including the work they’ll perform after joining their respective Expedition crews awaiting them on station.

The goal of NASA’s Commercial Crew Program is safe, reliable and cost-effective transportation to and from the International Space Station. This could allow for additional research time and increase the opportunity for discovery aboard humanity’s testbed for exploration, including helping us prepare for human exploration of the Moon and Mars.