Not so long ago, astronomers mapped a galaxy far, far away using radio waves and found it has a strikingly familiar shape. In the process, they discovered the object, called TXS 0128+554, experienced two powerful bouts of activity in the last century.

Around five years ago, NASA’s Fermi Gamma-ray Space Telescope reported that TXS 0128+554 (TXS 0128 for short) is a faint source of gamma rays, the highest-energy form of light. Scientists have since taken a closer look using the Very Long Baseline Array (VLBA) and NASA’s Chandra X-ray Observatory. 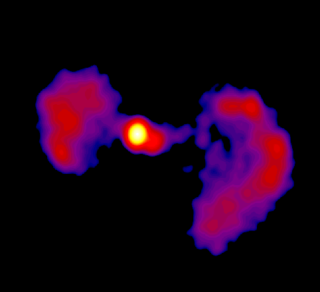 This image shows TXS 0128 at 15.4 gigahertz as observed by the Very Long Baseline Array (VLBA), a globe-spanning network of radio antennas. The colors correspond to the radio signal’s intensity, from low (purple) to high (yellow).
Credits: NRAO

“After the Fermi announcement, we zoomed in a million times closer on the galaxy using the VLBA’s radio antennas and charted its shape over time,” said Matthew Lister, a professor of physics and astronomy at Purdue University in West Lafayette, Indiana. “The first time I saw the results, I immediately thought it looked like Darth Vader’s TIE fighter spacecraft from ‘Star Wars: Episode IV – A New Hope.’ That was a fun surprise, but its appearance at different radio frequencies also helped us learn more about how active galaxies can change dramatically on decade time scales.”

A paper describing the findings, led by Lister, was published in the Aug. 25 issue of The Astrophysical Journal and is now available online.

TXS 0128 lies 500 million light-years away in the constellation Cassiopeia, anchored by a supermassive black hole around 1 billion times the Sun’s mass. It’s classified as an active galaxy, which means all its stars together can’t account for the amount of light it emits.

An active galaxy’s extra energy includes excess radio, X-ray, and gamma-ray light. Scientists think this emission arises from regions near its central black hole, where a swirling disk of gas and dust accumulates and heats up because of gravitational and frictional forces.

Around one-tenth of active galaxies produce a pair of jets, beams of high-energy particles traveling at nearly the speed of light in opposite directions. Astrophysicists think these jets produce gamma rays. In some cases, collisions with tenuous intergalactic gas eventually slow and halt the outward motion of jet particles, and the material starts to flow back toward the galaxy’s center. This results in broad regions, or lobes, filled with fast-moving particles spiraling around magnetic fields. The particle interactions create bright radio emission.

This illustration shows two views of the active galaxy TXS 0128+554, located around 500 million light-years away. Left: The galaxy’s central jets appear as they would if we viewed them both at the same angle. The black hole, embedded in a disk of dust and gas, launches a pair of particle jets traveling at nearly the speed of light. Scientists think gamma rays (magenta) detected by NASA’s Fermi Gamma-ray Space Telescope originate from the base of these jets. As the jets collide with material surrounding the galaxy, they form identical lobes seen at radio wavelengths (orange). The jets experienced two distinct bouts of activity, which created the gap between the lobes and the black hole. Right: The galaxy appears in its actual orientation, with its jets tipped out of our line of sight by about 50 degrees.
Credits: NASA's Goddard Space Flight Center
Download high-resolution video and images from NASA’s Scientific Visualization Studio

Fermi has identified over 3,000 active galaxies using its Large Area Telescope, which surveys the entire sky every three hours. Nearly all of them are aligned so that one jet points almost directly at Earth, which boosts their signals. TXS 0128, however, is around 100,000 times less powerful than most of them. In fact, even though it’s relatively nearby, Fermi needed to accumulate five years of data from the galaxy before reporting it as a gamma-ray source in 2015.

Researchers then added the galaxy to a long-running survey conducted by the VLBA, a network of radio antennas operated by the National Radio Astronomy Observatory stretching from Hawaii to the U.S. Virgin Islands.

The array’s measurements provide a detailed map of TXS 0128 at different radio frequencies. The radio structure they revealed spans 35 light-years across and tilts about 50 degrees out of our line of sight. This angle means the jets aren’t pointed directly at us and may explain why the galaxy is so dim in gamma rays.

“The real-world universe is three-dimensional, but when we look out into space, we usually only see two dimensions,” said Daniel Homan, a co-author and professor of astronomy at Denison University in Granville, Ohio. “In this case, we’re lucky because the galaxy is angled in such a way, from our perspective, that the light from the farther lobe travels dozens more light-years to reach us than the light from the nearer one. This means we’re seeing the farther lobe at an earlier point in its evolution.”

If the galaxy was aligned so the jets and lobes were perpendicular to our line of sight, all the light would reach Earth at the same time. We would see both sides at the same stage of development, which they are in reality.

The galaxy’s apparent shape depends on the radio frequency used. At 2.3 gigahertz (GHz), about 21 times greater than the maximum broadcast frequency of FM radio, it looks like an amorphous blob. The TIE fighter shape emerges at 6.6 GHz. Then, at 15.4 GHz, a clear gap in the radio emission appears between the galaxy’s core and its lobes.

Lister’s team suspects a lull in TXS 0128’s activity created this gap. The galaxy’s jets appear to have started around 90 years ago, as observed from Earth, and then stopped about 50 years later, leaving behind the unconnected lobes. Then, roughly a decade ago, the jets turned on again, producing the emission seen closer to the core. What caused the sudden onset of these active periods remains unclear.

The radio emission also sheds light on the location of the galaxy’s gamma-ray signal. Many theorists predicted that young, radio-bright active galaxies produce gamma rays when their jets collide with intergalactic gas. But in TXS 0128’s case, at least, the particles in the lobes don’t produce enough combined energy to generate the detected gamma rays. Instead, Lister’s team thinks the galaxy’s jets produce gamma rays closer to the core, like the majority of active galaxies Fermi sees.

The team observed the galaxy in X-rays using Chandra, looking for evidence of an enveloping cocoon of ionized gas. While their measurements couldn’t confirm the presence or absence of a cocoon, there has been evidence for such structures in other active galaxies, like Cygnus A. The observations do indicate the galaxy has a large amount of dust and gas surrounding its core, which is consistent with a highly inclined viewing angle.

“This galaxy reminds us of the importance of multiwavelength observations, looking at objects across a wide range of the electromagnetic spectrum,” said Elizabeth Hays, the Fermi project scientist at NASA’s Goddard Space Flight Center in Greenbelt, Maryland. “Fermi, the VLBA, and Chandra each add a layer to our growing picture of this object, revealing their own surprises.”

The Fermi Gamma-ray Space Telescope is an astrophysics and particle physics partnership managed by NASA's Goddard Space Flight Center in Greenbelt, Maryland. Fermi was developed in collaboration with the U.S. Department of Energy, with important contributions from academic institutions and partners in France, Germany, Italy, Japan, Sweden, and the United States.