Invisible magnetic fields play a role in everything from star formation to galaxy evolution to black hole phenomena. But astronomers still debate what that role is.

The HAWC+ instrument, a far-infrared imager and polarimeter aboard the Stratospheric Observatory for Infrared Astronomy (SOFIA), is helping portray magnetism's role in a beautiful way. Flying above much of Earth’s atmosphere aboard a modified Boeing 747, HAWC+ has measured the polarization of far-infrared radiation, gauging how well the light waves are aligned with each other.

Usually, light waves are not aligned with each other at all. But dust grains line up in the space between stars due to interstellar magnetic fields, so the infrared radiation dust emits is polarized. HAWC+ thus enables astronomers to infer the alignment and strength of the magnetic field. 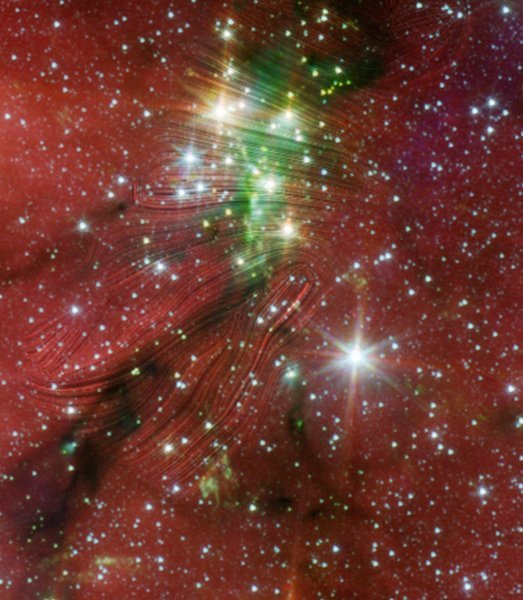 This composite image of the Serpens South Cluster shows the magnetic fields, as observed by SOFIA, as streamlines over an image from the Spitzer Space Telescope. The strong, dense flow of gas in the dark filament at lower left has dragged the magnetic field lines so that they run along the length of the filament.
NASA / SOFIA / T. Pillai / J. Kauffmann; NASA / JPL-Caltech / L. Allen

Magnetic fields also permeate star-forming clouds — but what they do there remains unclear, as the field strength is 10,000 times weaker than Earth’s magnetic field and therefore difficult to measure.

Previous measurements using the Planck satellite have shown that the magnetic field tends to run parallel to lower-density filaments and perpendicular to higher-density filaments, suggesting that magnetism might moderate star formation by counteracting the pull of gravity.

However, the new HAWC+ measurements taken by Pillai’s team indicate that along the densest, darkest filaments in Serpens South, the magnetic fields once again run parallel. “In some dense filaments the magnetic field succumbs to the flow of matter and is pulled into alignment with the filament,” Pillai explains. In these regions, the weakly magnetized gas is feeding the growth of young stellar clusters like a conveyor belt.

This is only the latest result to come out of HAWC+. A selection of other composite images below visualize the magnetic field lines in the star-forming Orion Nebula, the Cigar Galaxy (M82), and in the region around our galaxy's supermassive black hole.

The SOFIA 106-inch telescope and instruments image infrared light from on high, flying aboard a modified Boeing 747SP jetliner. Unfortunately, operations have been suspended due to the ongoing COVID-19 pandemic; however, the SOFIA science center remains active and astronomers continue to work with the data that SOFIA has already collected.