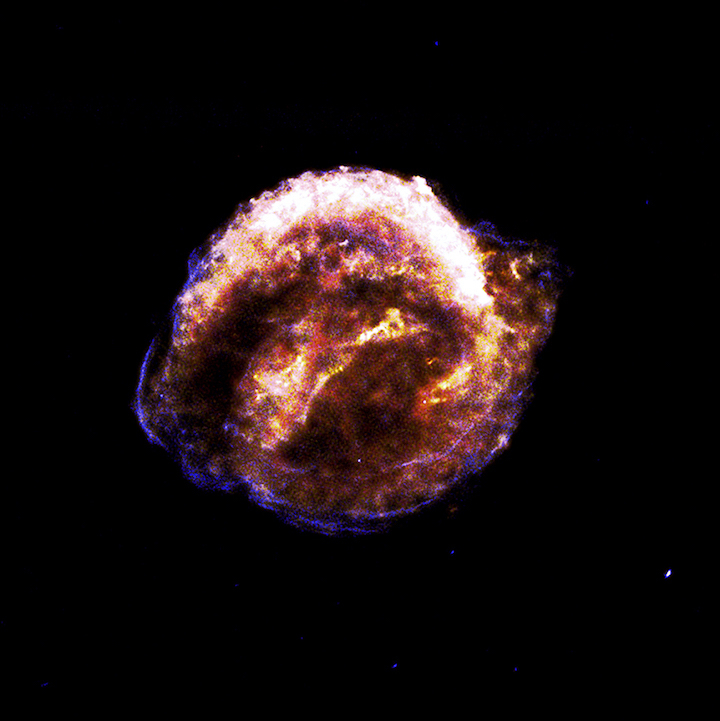 Astronomers have used NASA's Chandra X-ray Observatory to record material blasting away from the site of an exploded star at speeds faster than 20 million miles per hour. This is about 25,000 times faster than the speed of sound on Earth.

Kepler's supernova remnant is the debris from a detonated star that is located about 20,000 light years away from Earth in our Milky Way galaxy. In 1604 early astronomers, including Johannes Kepler who became the object's namesake, saw the supernova explosion that destroyed the star.

We now know that Kepler's supernova remnant is the aftermath of a so-called Type Ia supernova, where a small dense star, known as a white dwarf, reaches a critical mass limit after interacting with a companion star and undergoes a thermonuclear explosion that shatters the white dwarf and launches its remains outward.

Researchers in the latest study estimated the speeds of the knots by analyzing Chandra X-ray spectra, which give the intensity of X-rays at different wavelengths, obtained in 2016. By comparing the wavelengths of features in the X-ray spectrum with laboratory values and using the Doppler effect, they measured the speed of each knot along the line of sight from Chandra to the remnant. They also used Chandra images obtained in 2000, 2004, 2006 and 2014 to detect changes in position of the knots and measure their speed perpendicular to our line of sight. These two measurements combined to give an estimate of each knot's true speed in three-dimensional space. A graphic gives a visual explanation for how motions of knots in the images and the X-ray spectra were combined to estimate the total speeds.

The 2017 work applied the same general technique as the new study, but used X-ray spectra from a different instrument on Chandra. This meant the new study had more precise determinations of the knot's speeds along the line of sight and, therefore, the total speeds in all directions.

In this new sequence of the four Chandra images of Kepler's supernova remnant, red, green, and blue reveal the low, medium, and high-energy X-rays respectively. The movie zooms in to show several of the fastest moving knots.

The high speeds in Kepler are similar to those scientists have seen in optical observations of supernova explosions in other galaxies only days or weeks after the explosion, well before a supernova remnant forms decades later. This comparison implies that some knots in Kepler have hardly been slowed down by collisions with material surrounding the remnant in the approximately 400 years since the explosion.

Based on the Chandra spectra, eight of the 15 knots are definitely moving away from Earth, but only two are confirmed to be moving towards it. (The other five do not show a clear direction of motion along our line of sight.) This asymmetry in the motions of the knots implies that the debris may not be symmetric along our line of sight, but more knots need to be studied to confirm this result.

The four knots with the highest total speeds are all located along a horizontal band of bright X-ray emission. Three of them are labeled in a close-up view. These four knots are all moving in a similar direction and have similar amounts of elements such as silicon, suggesting that the matter in all of these knots originated from the same layer of the exploded white dwarf.

One of the other fastest moving knots is located in the "ear" of the right side of the remnant, supporting the intriguing idea that the three-dimensional shape of the debris is more like a football than a uniform sphere. This knot and two others are labeled with arrows in a close-up view.

The explanation for the high-speed material is unclear. Some scientists have suggested that Kepler's supernova remnant is from an unusually powerful Type Ia, which might explain the fast-moving material. It is also possible that the immediate environment around the remnant is itself clumpy, which could allow some of the debris to tunnel through regions of low density and avoid being decelerated very much.

The 2017 team also used their data to refine previous estimates of the location of the supernova explosion. This allowed them to search for a companion to the white dwarf that may have been left behind after the supernova, and learn more about what triggered the explosion. They found a lack of bright stars near the center of the remnant. This implied that a star like the Sun did not donate material to the white dwarf until it reached critical mass. A merger between two white dwarfs is favored instead.

The new results have been reported in a paper led by Matthew Millard, from the University of Texas at Arlington, and published in the April 20th, 2020 issue of the Astrophysical Journal. The paper is also available online. The co-authors of the paper are Jayant Bhalerao and Sangwook Park (University of Texas at Arlington), Toshiki Sato (RIKEN in Saitama, Japan, and NASA's Goddard Space Flight Center in Greenbelt, Maryland), John (Jack) Hughes (Rutgers University in Piscataway, New Jersey), Patrick Slane and Daniel Patnaude (Harvard-Smithsonian Center for Astrophysics in Cambridge, Mass.), David Burrows (Penn State University, University Park, Penn.), and Carles Badenes (University of Pittsburgh, Penn).

A paper by Toshiki Sato and Jack Hughes reported the discovery of fast-moving knots in Kepler's supernova remnant and was published in the August 20th, 2017 issue of The Astrophysical Journal. The paper is available online.

The X-ray spectra used by Millard and collaborators were obtained with the Chandra High Energy Transmission Grating.