Scottish company Skyrora, which plans to launch satellites into orbit from the Highlands and Islands, has set up a new engine test base.

The firm’s chief executive, Volodymyr Levykin, said the establishment of the facility in Fife was a “giant leap forward” for Scotland’s growing reputation as a “space hub.”

Edinburgh-based Skyrora aims to win a share of the lucrative small satellite launch market and hopes its first payload will blast off from one of three proposed north spaceports by 2023.

Last month, the firm carried out a test flight of the first rocket to be launched from Shetland, which followed two launches from Kildermorie Estate, near Alness, in Easter Ross.

Skyrora has already tested engines for two of its rockets at its new facility.

Mr Levykin said: “The opening of our engine test complex represents a giant leap forward for the UK’s ambitions as a space nation and Scotland’s status as a space hub.

“Skyrora has developed and come so far as a team and a company, and I am really proud to see how many milestones we have achieved in a short period of time.”

“Scotland is heading towards an unprecedented growth in UK space and our complex is one step closer to achieving this. We are planning to test all our engines, which are fully 3D printed and operate on high-test peroxide at the site.”

In June, Skyrora’s Skylark Nano rocket soared to around 20,000ft from a remote site of North Roe, at the northernmost tip of the Shetland mainland.

The firm described the test, which was used to gather weather data and train staff, as “very important” as the islands are a potential option for launches of its XL commercial rocket.

Also last month, £17.3 million plans by development agency Highlands and Islands Enterprise to build a vertical launch spaceport  on the A’Mhoine peninsula, in Sutherland were approved by Highland Council.  Others are being planned on the Shetland island of Unst and on North Uist, in the Outer Hebrides.

Skyrora has estimated its new test facility will help it create more than 170 jobs, mainly in manufacturing and operations. 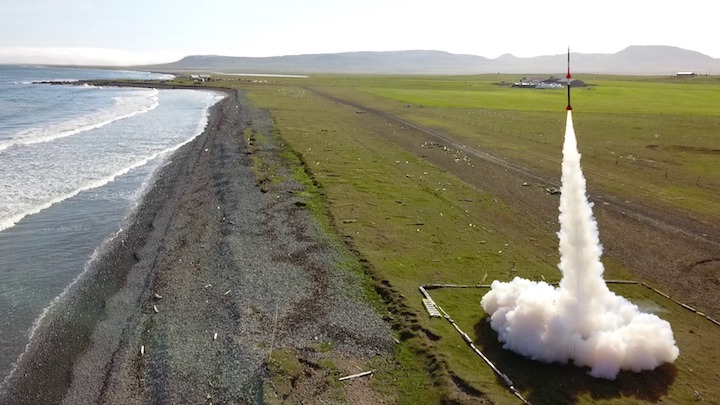 Skyrora has successfully launched its two-stage, four-metre tall sub-orbital rocket, Skylark Micro from the company’s mobile launch complex set up within a few days at Langanes Peninsula, Iceland. The rocket climbed to 26.86km in altitude before both stages were parachuted back down to sea.

The launch is part of Skyrora’s de-risking program leading up to the building and launching of its orbital vehicle, Skyrora XL, scheduled for 2023. The launch of Skylark Micro was to test onboard electronics and communications that will also be used in the larger Skylark-L and Skyrora XL launch vehicles. Before launch, the team undertook a number of weather procedures to learn more about the mid and upper-level wind speeds and altitudes. In addition, the mobile launch complex allowed the team to collect a large amount of data of telemetry, GPS tracking, and weather conditions during the flight to which they are currently analysing. The test also allowed the Skyrora crew to practice launch procedures and marine recovery operations.

Despite the ongoing heroic efforts of the Langanes Search and Rescue and Skyrora Recovery teams, Skyrora has unfortunately been unsuccessful in their efforts of locating the Skylark Micro booster and sustainer stages. However, they are still continuing search operations for the next few days as well as learning how to improve future recovery operations. Creating another test of our suborbital mobile launch complex in a different location demonstrates the immense speed and flexibility of Skyrora for launching its test rockets.

Until this year, Iceland had no permit procedure to allow rockets to be launched from the country. However, after Skyrora traveled to Iceland in January to meet the relevant government officials and see the launch site, the Icelandic authorities agreed upon and implemented a framework to allow Skyrora to launch its Skylark Micro. The successful launch was closely organised with Space Iceland, only founded in 2019. With their help and within a few months, Skyrora got the operational logistics and governmental documents in place before the launch took place.

Leading up to the launch, Skyrora invited the Mayor of Langanesbyggd, Jonas-Egilsson, Members of Parliament, families, and students from the local areas to meet and greet the team as well as having the chance to learn more about the Skylark Micro mission and see the rocket up close before it set off.

Volodymyr Levykin, chief executive officer of Skyrora said: "I am very happy that Iceland has allowed us to launch from their country. This allowed us to continue our developmental and de-risking programme. It is critical that we complete the programme so we can scale up and learn from any mistakes before launching our larger launch vehicles, Skylark L and Skyrora XL. "

"These de-risking launches are all about learning and education. The Icelandic launch has allowed us to test our avionics and communications on a smaller and more cost-effective vehicle. I also hope this educational launch promotes the space industry in a positive way and inspires the younger generation."

"I could not be more thankful for Iceland putting the permit framework together in such a short period of time."

Icelandic government officials and ministers have expressed their delight of Skyrora expanding its business to their country. Thor Fanndal from Space Iceland said: “We congratulate Skyrora on its successful launch. All of us at Space Iceland are immensely proud of our contribution to this. It only took six months to secure all permits which we believe is a testament to the efficiency of Iceland’s public agencies.”