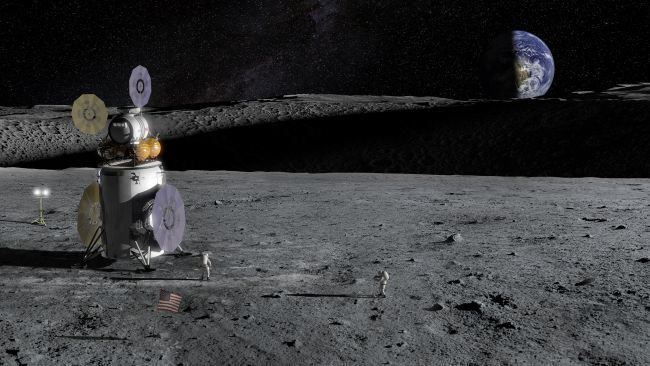 An artist's illustration of an Artemis landing craft at the lunar south pole.

Permanently shadowed regions at the moon's poles have a story to tell. Sun-shy polar ice patches could not only yield an account of lunar history but also offer astrobiological clues regarding the origin of life.

The permanently shadowed floors of polar craters are generally between 3.4 to 3.9 billion years old, based on cratering statistics.

NASA's Artemis program calls for landing the first woman and next man on the moon by 2024. The agency also aims to establish sustainable exploration there by the end of the decade, a project that may include a base camp near Shackleton Crater at the moon's south pole.

Such ambitious exploration efforts would likely rely, at least in part, on water ice mined from polar craters. And that raises a question: Can humanity utilize this precious resource without compromising the poles' scientific potential?

The document defines NASA's implementation of obligations to avoid harmful contamination under the United Nations' Outer Space Treaty, which came into effect in 1967.

The document separates the lunar surface into two categories. Most of the moon is defined as "Category I," which requires minimal planetary protection measures. But permanently shadowed polar areas that harbor water ice are classified as the slightly more restrictive "Category II," as are the Apollo landing sites and other historical spots.

The relevant permanently shadowed regions "have scientific value in the study of the history of the solar system and [are] of significant interest relative to the process of chemical evolution, as well as potential value for In-Situ Resource Utilization (ISRU)," the directive states.

The directive does not apply to other countries or private sector firms if their missions do not involve NASA. If ISRU becomes a reality on the moon and polar craters are indeed mined for their water ice, could a scientific bonanza be wiped out?

Policy and directive decision-making concerning lunar protection "has raised the larger issue of how to balance development and science on the moon," said Paul Lucey, a planetary scientist at the Hawaii Institute of Geophysics and Planetology at the University of Hawaii at Manoa.

"Some parts of the moon are very fragile, especially the lunar atmosphere and the coldest parts of the lunar poles," Lucey told Space.com. "Extensive human activity may permanently alter these environments, leading to a loss of the science they can provide."

"Personally, I believe that the moon provides an interesting target for astrobiology, in that it can potentially help scientists fill in the gaps about what the conditions on the primordial Earth may have been like, and perhaps insights into the organic inventory that may have been available," said Chris Bennett, an assistant professor in the Department of Physics/Planetary Science at the University of Central Florida in Orlando.

Back-of-the-envelope calculations suggest that substantial amounts of amino acids could have been brought to Earth by carbonaceous chondritic meteorites, Bennett told Space.com.

"However, geological processes and even life itself has literally eroded away the surface of the Earth during the first billion years, along with it the possibility of determining what the conditions were like back then," Bennett said.

The same is not true of the moon. Earth's nearest neighbor harbors a record of the bombardment experienced during the solar system's early days, preserved in the rocks brought back during Apollo and the former Soviet Union's Luna program. And many of these returned moon samples are older than any rocks found on Earth.

"There is evidence of the exogenous delivery of organics — i.e., from comets, meteorites and their associated interplanetary dust particles — still present on the moon today," said Bennett. "Yet, this work emphasizes the need to get back to the moon and collect new samples for analysis."

Research on this prospect is being pursued by Parvathy Prem, a staff scientist in the Planetary Exploration Group at the Johns Hopkins University Applied Physics Laboratory in Laurel, Maryland.

"I think my main takeaway from the work I've been doing is that the redistribution of exhaust gases could be the most widespread and longest-lived modification of the lunar environment by a spacecraft," Prem said. "Contamination of permanently shadowed regions could potentially be minimized by planning trajectories and propellant use accordingly."

"So, [there's] no clear-cut distance at which exhaust would not influence a permanently shadowed region," Prem said. "It really depends on the landing trajectory, the propellant used and also some of the specifics of how water and other volatiles interact with the lunar surface, which we don't yet know for certain."

Taking a big-picture view, Prem thinks the main thing to keep in mind is that the lunar polar microenvironment is unique in many ways.

"When we visit it, we will inevitably alter it, temporarily or permanently. I would say that understanding and planning for the impact of spacecraft systems on the lunar environment is critical to carrying out meaningful and responsible science," Prem concluded.