Imagine that the size of a bacterium is measured from a distance of about 4500 light-years. This would be an incredible measurement, considering that a bacterium is so small that a microscope is required to see it, and what an enormous distance light can travel in 4500 years, given that it can round the Earth more than seven times in just one second. But a small deformation of the size of a bacterium, that is an extra height of a few micrometres in one direction, has now been inferred for a neutron star at a distance of about 4500 light-years, from a research by Prof. Sudip Bhattacharyya of the Tata Institute of Fundamental Research (TIFR), India. This research is published in a new paper in Monthly Notices of the Royal Astronomical Society.

Neutron stars are incredibly dense cosmic objects. They are about the size of a city, but contain more material than in the Sun, and a handful of stellar stuff would outweigh a mountain on the Earth. Some of them are observed to spin several hundred times in a second, and we call them millisecond pulsars. A slight asymmetry or deformation around the spin axis of such a star would cause the emission of gravitational waves continuously.

Gravitational waves, which are ripples in spacetime, have recently provided a new window to the universe. But so far they have been found as transient phenomena of mergers of black holes and neutron stars. Continuous gravitational waves, for example from a slightly deformed and spinning neutron star, have so far not been detected. The current instruments may not have the capability to detect these waves, if the deformation is too small.

However, a way to indirectly infer such waves and to measure this deformation is to estimate the contribution of the waves to the spin-down rate of the pulsar, which was not possible till now. PSR J1023+0038 is a unique cosmic source for this purpose, because it is the only millisecond pulsar for which two spin-down rates, in the phase of mass transfer from the companion star and in the phase when there is no mass transfer, were measured. Using these values, and primarily a fundamental principle of physics, that is the conservation of angular momentum, Bhattacharyya has inferred continuous gravitational waves and has estimated the neutron star's microscopic deformation. 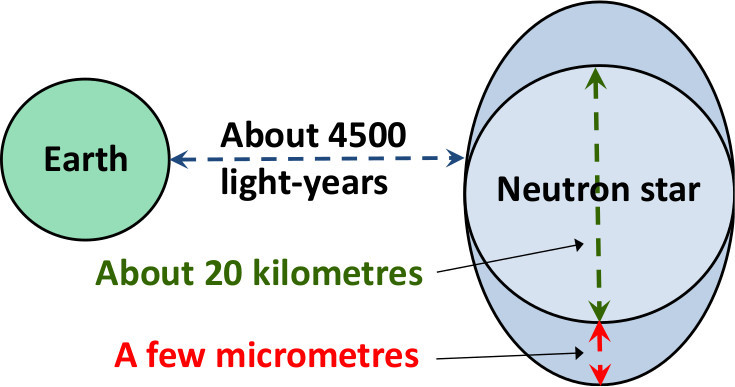 Published in Monthly Notices of the Royal Astronomical Society (August 2020)