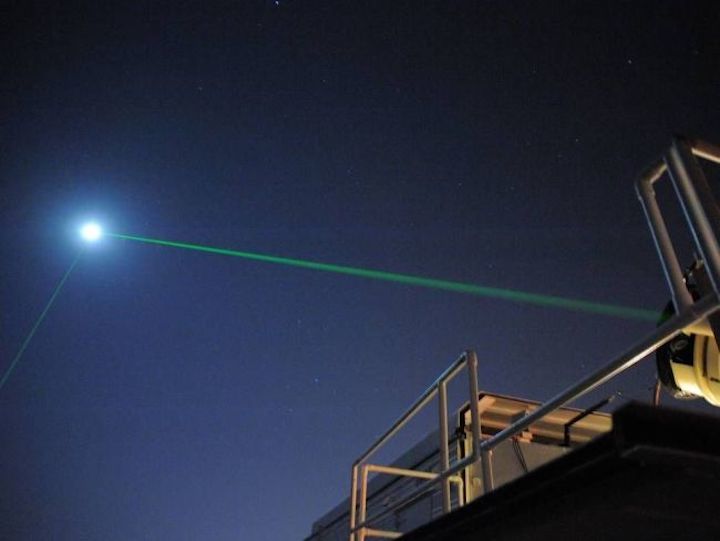 This photograph shows the laser-ranging facility at the Goddard Geophysical and Astronomical Observatory in Greenbelt, Maryland trying to hit the Lunar Reconnaissance Orbiter (LRO) with green laser light. For the first time, another facility in Grasse, France successfully bounced a laser (using infrared light) off the LRO's onboard mirror.
(Image: © NASA)

For the first time, scientists have successfully bounced a laser off a mirror that's attached to a spacecraft whirling around the moon.

Bouncing lasers off mirrors on the lunar surface is an old trick. Astronauts walking on the moon first left reflectors behind in 1969. And since then, researchers have bounced lasers off those reflectors to make precise measurements of the distance between the moon and Earth, using the speed of light and the time it takes for the laser beam to return to Earth.

But hitting a laser in orbit around the moon is a much trickier task. The Lunar Reconnaissance Orbiter (LRO) has orbited the moon with a mirror on its back since 2009. But nearly a decade went by without a single successful laser bounce. In an Aug. 6 paper in the journal Earth, Planets and Space, a team of researchers report the first successful laser contact: Twice on Sept. 4, 2018 and twice again between Aug. 23 and Aug. 24, 2019, technicians at the Lunar Laser Ranging (LLR) station in Grasse, France, shot laser bursts at the LRO and saw the light return 2.5 seconds later.

To make sure that the light bouncing off the LRO returns in the direction from which it came, the mirror on its back is more complicated than the one in your bathroom. Like the older mirrors on the lunar surface, it's a "corner cube" — a series of three-dimensional mirrors, each literally shaped like the inside of one corner of a cube. When a laser hits it, the light bounces three times before the geometry of the mirror returns it in the precise direction from which it came.

Tracking the movement of the LRO over time is an interesting scientific project in its own right. But, the researchers wrote, these four successful laser contacts don't offer enough data to track that movement. The LRO is still moving too fast and too unpredictably to reliably hit with a laser, and all four contacts were made under what the researchers described as ideal conditions. The moon, LRO and France were all lined up perfectly to improve the odds of laser contact.

Over the long-term, studies of the LRO mirror could help resolve a tricky problem impacting the mirrors left on the lunar surface. All of those mirrors have become less reflective over time, and researchers aren't sure why. But that lost quality is making precise measurements more difficult. The issue could be that long-term exposure to solar radiation just weakens the mirrors. In that case, the LRO's mirror should weaken over time at the same rate. Alternatively, lunar dust or faint haze from the moon's thin atmosphere could be obscuring the mirrors, the researchers wrote. In that case, the LRO's reflectivity should remain more or less unchanged over time high in orbit, even as the surface mirrors degrade.