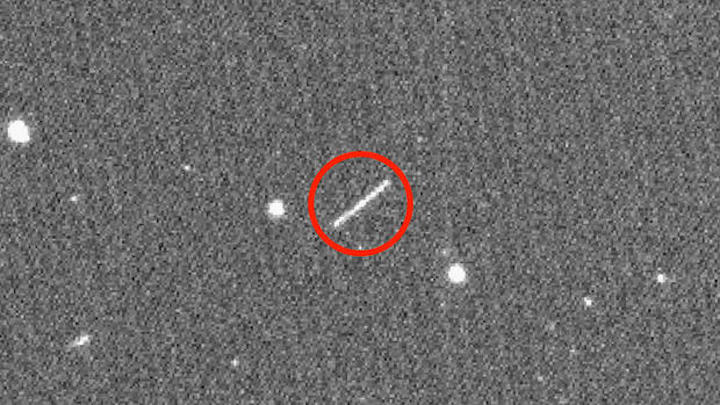 The circled streak in the center of this image is asteroid 2020 QG, which came closer to Earth than any other nonimpacting asteroid on record. It was detected by the Zwicky Transient Facility on Sunday, Aug. 16 at 12:08 a.m. EDT (Saturday, Aug. 15 at 9:08 p.m. PDT).

A car-sized asteroid just made the closest-known approach to Earth without actually colliding with the planet. And researchers didn't even know about it until hours after it had already passed.

Asteroid 2020 QG, formerly known as ZTFoDxQ, zoomed past Earth on Sunday at 12:08 a.m. EDT, getting as close as 1,830 miles away. It marks the closest asteroid flyby ever recorded in which the object actually survived, according to NASA.

For comparison, the International Space Station is 254 miles away.

"Near-Earth Asteroids (NEAs) pass by Earth all the time, but 2020 QG passed closer to Earth than any other known NEA without actually impacting," a NASA spokesperson told CBS News on Tuesday.

2020 QG was first observed at the Palomar Observatory a whopping six hours after it passed over the southern Indian Ocean.

"It's quite an accomplishment to find these tiny close-in asteroids in the first place, because they pass by so fast," said Paul Chodas, director of the Center for Near-Earth Object Studies (CNEOS) at NASA's Jet Propulsion Laboratory in Southern California. "There's typically only a short window of a couple of days before or after close approach when this small of an asteroid is close enough to Earth to be bright enough but not so close that it moves too fast in the sky to be detected by a telescope."

The asteroid was traveling at 27,600 miles per hour, or nearly 8 miles per second, which NASA said is a little slower than average. On average, an asteroid of its size passes this closely just a few times each year.

Being only about 10 to 20 feet in diameter, the asteroid was not actually big enough to pose a serious threat. If it had been on a collision course, it would have likely ended up as a fireball — an extremely bright meteor — as it broke up in Earth's atmosphere.

The asteroid "approached Earth from the direction of the Sun and was not discovered until after it passed and could be observed in the night sky by ground-based observatories," NASA confirmed. "By some estimates, there are hundreds of millions of small asteroids the size of 2020 QG, but they are extremely hard to discover until they get very close to Earth."

NASA carefully tracks near-Earth objects, but it's only aware of a fraction of them due to such observational limitations.

Scientists at NASA are developing a telescope that could detect asteroids coming from the direction of the sun, eliminating the current blind spot in their observations. The Near-Earth Object Surveillance Mission could launch as early as 2025.

NASA is also planning to launch the Double Asteroid Redirection Test (DART) in July 2021. DART will purposely crash into a harmless asteroid moon in the fall of 2022 to attempt to change its motion, in the first test for planetary defense.