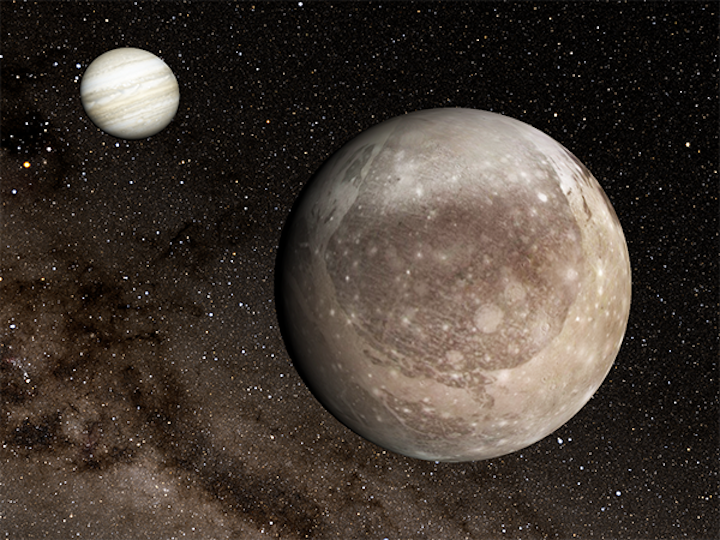 An artist's depiction of Jupiter, at left, and its massive moon Ganymede in the foreground.
(Image: © Tsunehiko Kato, 4D2U Project, NAOJ)

Scientists have discovered what they believe may be the largest impact crater in the entire solar system, with scars covering a vast portion of Jupiter's biggest moon, Ganymede.

The scientists behind the new research wanted to revisit observations from a host of past NASA missions that studied the massive moon, which is larger than Mercury, the smallest planet in our neighborhood. In particular, they were intrigued by a set of features dubbed furrows, which appear on some of the moon's oldest terrain.

Previous researchers had pointed to these furrows as evidence of a large impact powerful enough to leave scars across an entire side of Ganymede. But on revisiting the structures, the scientists behind the new research believe that's an underestimate, and that the furrows represent an impact so large as to affect the entire moon.

The researchers began by gathering data collected by NASA's twin Voyager missions, which each flew past the Jupiter system in 1979, and by NASA's Galileo mission, which spent eight years over the late 1990s and early 2000s studying the massive planet and its neighbors.

The scientists then reanalyzed observations that covered what's called the Dark Terrain, which includes the oldest surfaces on Ganymede. Throughout the Dark Terrain, according to the new modelling, the furrows all ripple out from one point — even those on the opposite side of the moon.

The researchers suggest that makes the furrows indicators of an impact event that affected all of Ganymede, not just the one hemisphere previously identified as reshaped in such an event, although positively identifying an impact site takes more than suspicious rings.

But if an impact was to blame, quite a large asteroid — at least 30 miles (50 kilometers) across and possibly more like 90 miles (150 km) across — could have been involved in that collision, leaving a bullseye series of rings and fractures across the moon that, after millennia of geological processes, have become the furrows and troughs scientists see now, according to a statement about the new research.

If that modeling is correct, the scientists say, they have found the largest impact scar in the solar system, with a radius as large as 4,800 miles (7,800 km) — that's a radius about twice the length of the Mississippi River. The current largest known impact system, called Valhalla Crater and found on another Jupiter moon, Callisto, pales in comparison, with a radius of 1,200 miles (1,900 km).

The scientists behind the new research hope that new data will help them better interpret the furrows of Ganymede and understand precisely what formed them. The European Space Agency is at work building a spacecraft called the Jupiter Icy Moons Explorer (JUICE), which it intends to launch in 2022. The mission will focus on Ganymede, Callisto and Europa, arriving in the neighborhood in 2029 and operating there for at least three years.

The research is described in a study published July 15 in the journal Icarus.