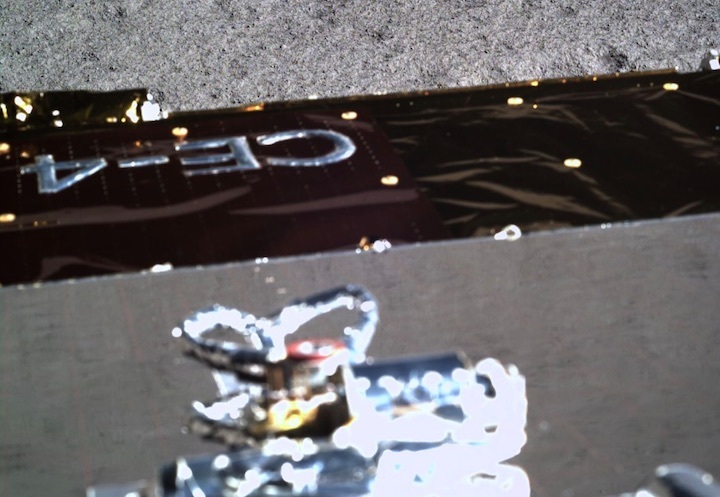 Chinese researchers have published an analysis of a gel-like substance spotted by the country's Yutu-2 lunar rover in a crater on the far side of the moon last year.

In a research paper published in the journal Earth and Planetary Science Letters, researchers from institutes under the Chinese Academy of Sciences described the substance as "a dark greenish and glistening impact melt breccia" on the floor of the Von Karman crater on the far side of the moon. It measures about 52 cm by 16 cm.

Breccia is a type of rock composed of angular fragments of minerals or rock cemented together.

The researchers compared the images taken by the lunar rover with samples brought back from the moon by the U.S. Apollo missions. They found that the substance resembled the Apollo samples, suggesting that it could be formed by some violent impact, such as a meteorite that crashed into the moon.

They said that the impact melted some lunar regolith and breccia together, which formed the substance. Lunar regolith refers to the mixture of powdery dust and broken rock that covers the surface of the moon.

The rover Yutu-2, or Jade Rabbit-2, has worked much longer than its three-month design life, becoming the longest-working lunar rover on the moon. Enditem

The unusual dark greenish and glistening "gel-like" substance in a crater on the far side of the moon has attracted widespread interest following its discovery by the Chang'e-4 rover in July 2019.

A research team led by Prof. DI Kaichang from the Aerospace Information Research Institute (AIR) of the Chinese Academy of Sciences and their collaborators analyzed the substance in detail by using multiple datasets from the rover's panoramic camera (Pancam), hazard avoidance camera (Hazcam), and the visible and near-infrared spectrometer (VNIS).

The researchers found that the unusual substance is actually an impact melt breccia, and the provenance of the rover measured surrounding regolith might originate from a differentiated melt pool or from a suite of igneous rocks. Their findings were published in Earth and Planetary Science Letters.

China's Chang'e-4 probe, including a lander and a rover, successfully touched down within the 185-km-wide Von Kármán crater inside the South Pole-Aitken (SPA) basin on January 3, 2019, making the first-ever soft landing on the lunar far side.

The gel-like substance was discovered in a crater (Fig. 1) during the eighth lunar day of the rover's mission. Detailed measurements on the breccia and surrounding regolith were conducted during the ninth lunar day. 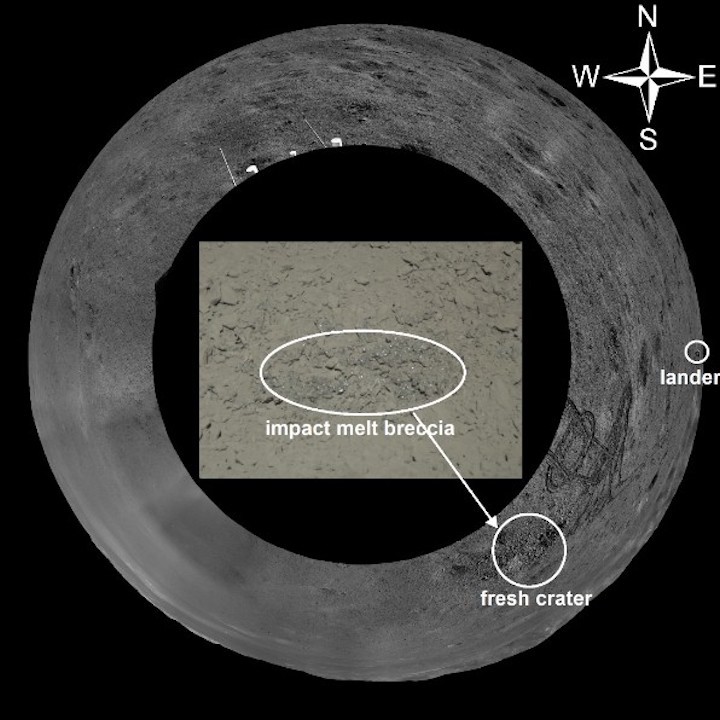 The discovered breccia, measuring 52 by 16 centimeters, resembles the lunar impact melt breccia samples 15466 and 70019 (Fig. 2) returned by the Apollo missions. It was formed by impact-generated welding, cementing and agglutinating of lunar regolith and breccia.

Clods surrounding the breccia-hosting crater were crushed into regolith powders by the rover’s wheels (Fig. 3), indicating the regolith may be compacted slightly and becomes blocky and friable.

Hapke model-based spectral unmixing results showed that plagioclase was abundant, and pyroxene and olivine had almost equal fractions, indicating the regolith was likely the weathering products of noritic rocks.

The regolith measured by Chang’e-4 rover was actually a mixture of multiple sources, with ejecta from Finsen crater being primary and possible contributions from Alder crater. Finsen and Alder craters are on the margin of the proposed impact melt pool produced by the SPA basin-forming event. Therefore, the provenance of the regolith might originate from a differentiated melt pool or from a suite of igneous rocks.

It provided the first deep view below the lunar surface. 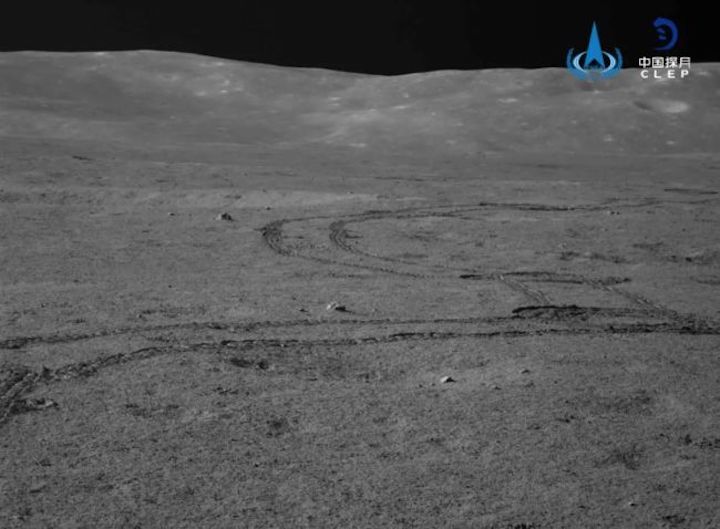 Tracks and the distant rim of Von Kármán crater, imaged by Yutu 2 in June 2020.
(Image: © CNSA/CLEP)

China's Chang'e 4 moon lander and rover have concluded their science tasks for a 20th lunar day on the far side of the moon.

Yutu 2 continued on its planned journey to the northwest of the lander, according to the China Lunar Exploration Program (CLEP). The rover covered 90 feet (27.64 meters) during the lunar day to make a total of 1,610 feet (490.9 m) of roving since setting down on the far side of the moon in January 2019. 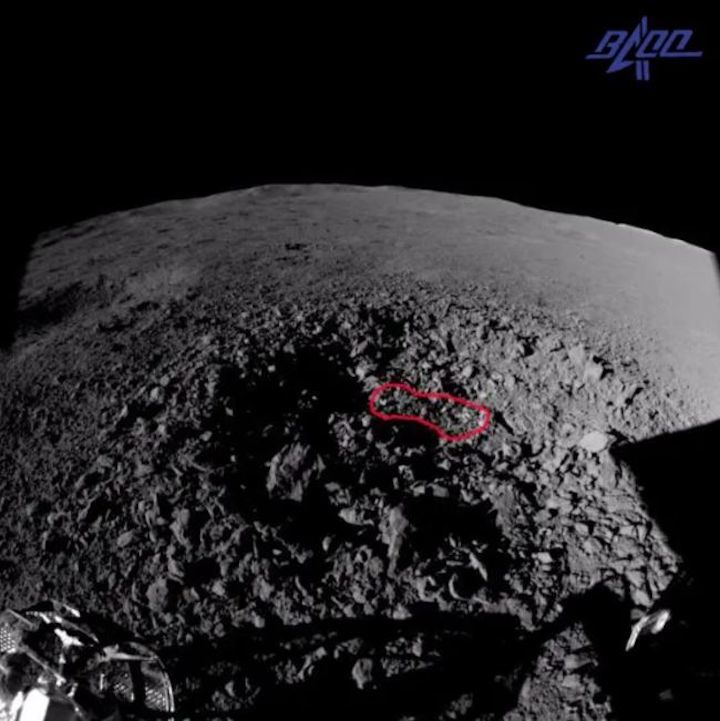 All of Chang'e 4's science instruments — including a low-frequency astronomy payload on the lander and a spectrometer for analyzing the composition of the lunar surface — are working well, according to CLEP.

During the previous lunar day (June 14-27), Yutu 2 checked out a small crater containing relatively reflective material at its center, according to Our Space, a Chinese-language science-outreach publication. It is likely to be similar to a discovery of which last year generated widespread interest but was recently confirmed by scientists to most likely be impact melt glass.

Data from another Yutu 2 instrument — the ground-penetrating radar — has also been used to provide a first deep look below Von Kármán crater in a paper published July 9 in the journal Nature Communications.

The radar operates at two frequencies, 60 MHz and 500 MHz. Another paper published in February in the journal Science Advances used the higher-frequency data to reveal three distinct layers beneath Yutu 2 down to 130 feet (40 m). The new paper uses the lower-frequency data which provides a deeper look, between 170 and 1,076 feet (52 to 328 m).

The detections reveal that buried ejecta from major impacts is overlaid by at least four layers of distinct lava flows. The data provides direct evidence of multiple lava-infilling events, likely occurring during the Imbrium epoch, between roughly 3,850 and 3,200 million years ago. 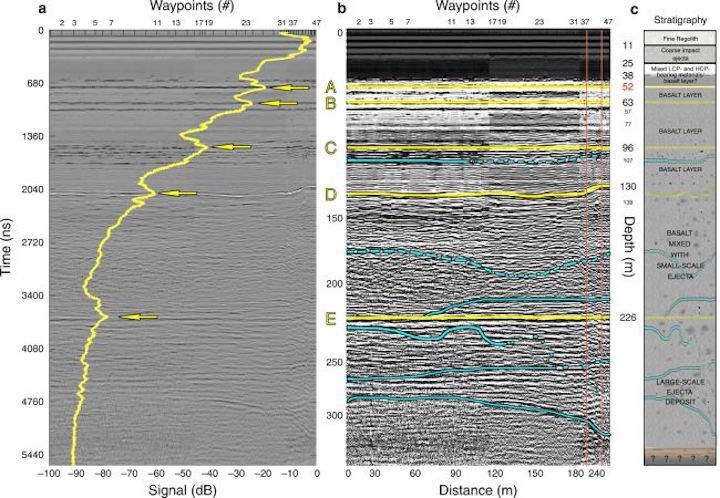 The researchers use the readings and earlier papers to build a possible history of Von Kármán crater, suggesting which impact events may have created particular subsurface strata.

The solar powered lander and Yutu 2 will wake up between 24 and 48 hours after local sunrise on Aug. 11 to begin lunar day 21. The spacecraft power down ahead of every roughly 14.5-Earth day lunar nighttime due to lack of sunlight and to protect against the deep cold.