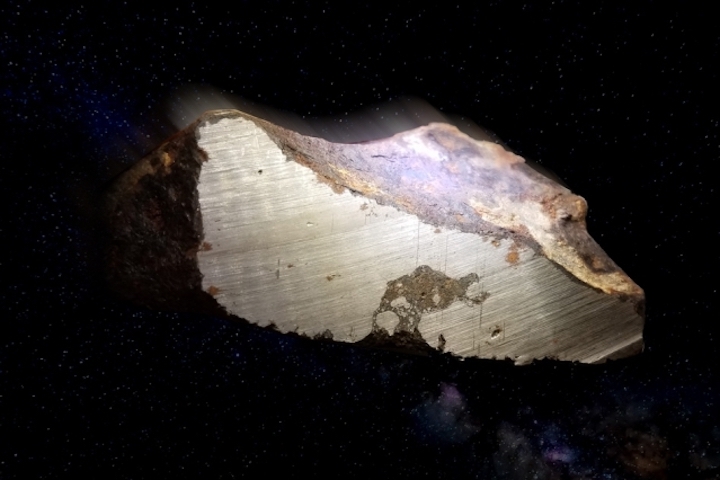 X-ray experiments at Berkeley Lab’s Advanced Light Source helped scientists to establish that the parent planetesimal of rare meteorites, like the one shown here, had a molten core, a solid crust, and a magnetic field similar in strength to the Earth’s magnetic field. (Credit: Carl Agee/Institute of Meteoritics, University of New Mexico; background edited by MIT News)

X-ray experiments at Lawrence Berkeley National Laboratory (Berkeley Lab) played a key role in resolving the origin of rare, odd meteorites that have puzzled scientists since their discovery a half-century ago. Known as type IIE iron meteorites, they appear to have originated from a parent body that had a composition featuring both fully melted and unmelted parts – other meteorite types display only one composition.

Researchers used Berkeley Lab’s Advanced Light Source (ALS), a synchrotron user facility that produces light ranging from infrared to X-rays for a variety of experiments, to produce 3D reconstructions of the detailed patterns of magnetic orientation imprinted in samples from two of these rare meteorites. Only nine of these meteorites have been found on Earth.

The magnetization pockets pointed to their likely origin in a large “planetesimal” – an object that took shape during the formative stage of our solar system – that indeed was both unmelted and melted. The object likely had a molten metallic core, a solid crust, and a magnetic field that may have rivaled the Earth’s in strength. The study was published online July 24 in Science Advances.

“We helped the research team to get this quantitative information about the direction and magnitude of the magnetization” in the samples, said Berkeley Lab’s Andreas Scholl, who first met with researchers on the team in 2015. Scholl is a senior staff scientist, beamline scientist, and science deputy at the ALS.

Rajesh Chopdekar, an ALS project scientist and a beamline scientist, noted that the X-rays were tuned specifically to measure the magnetic iron present in the samples. Thousands of magnetic images were compiled to generate statistical confidence in the magnitude and direction of the ancient magnetic field imprinted into the meteorites.

The Advanced Light Source is a DOE Office of Science user facility.

Quelle: Laboratory Managed by the University of California