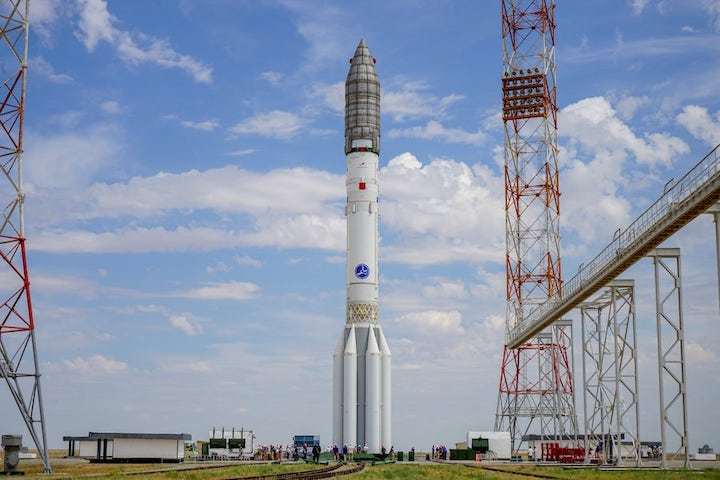 Two satellites designed to beam radio and television broadcasts, Internet connectivity and other communications services across Russia have arrived at a launch pad at the Baikonur Cosmodrome in Kazakhstan for liftoff Wednesday on the first flight of a Russian Proton rocket this year.

The Proton rocket rolled out to pad 39 at the Site 200 launch complex at Baikonur on Sunday, riding a railcar from a fueling station across the Kazakh steppe to the launch facility. Once it arrived at the pad, the rocket was raised vertical and a mobile tower moved into position around the launcher for final pre-flight checks.

Built by the Russian aerospace contractor Khrunichev, the 191-foot-tall (58.2-meter) Proton rocket is set to blast off with the Express 80 and Express 103 communications satellites, two spacecraft heading positions more than 22,000 miles (nearly 36,000 kilometers) over the equator to link users across Russia.

Stacked one on top of the other for launch, the two Express spacecraft are owned by the Russian Satellite Communications Company, or RSCC, a state-owned operator of Russian telecom satellites. The national operator provides civilian satellite communications services across Russia and neighboring countries.

The Proton rocket is scheduled for launch at 5:27:42 p.m. EDT (2127:42 GMT) Wednesday. It will be the first flight of a Proton rocket — Russia’s most powerful operational launch vehicle — since December.

Liftoff is scheduled for 2:27 a.m. Baikonur time on Thursday.

The Proton rocket will take off powered by six first stage RD-276 engines, each consuming a mixture of hydrazine and nitrogen tetroxide propellants. The six main engines will generate 2.5 million pounds of thrust as the Proton climbs away from Baikonur and heads northeast.

After separation of the Proton’s first stage, two more liquid-fueled stages will ignite to power the Express 80 and Express 103 satellites into space, along with a Breeze M upper stage designed to maneuver the twin payloads — weighing a combined 9,700 pounds (4.4 metric tons) — closer to their final geostationary orbit more than 22,000 miles over the equator.

The Breeze M upper stage will deploy from the Proton’s third stage less than 10 minutes after liftoff, beginning a sequence of engine burns to gradually boost the Express 80 and Express 103 satellites into progressively higher orbits.

According to Roscosmos, the Russian space agency, the Breeze M upper stage will release the Express 80 spacecraft — riding in the upper position in the dual-satellite stack — around 17 hours and 59 minutes into the mission. The deployment of Express 103 will follow 17 minutes later.

The satellites will use electric thrusters to reach their final operating positions in geostationary orbit.

Express 80 is heading to a slot along the equator 80 degrees east longitude, while Express 103 will enter service at 96.5 degrees east. Both satellites were built by ISS Reshetnev, a Russian spacecraft manufacturer, and are designed for 15-year missions.

Like other satellites in RSCC’s Express fleet, Express 80 and Express 103 will also relay communications for the Russian president and other senior government officials, according to ISS Reshetnev.

The additional photos below show the Proton rocket’s rollout to its launch pad at the Baikonur Cosmodrome with the Express 80 and Express 103 satellites. In these photos, the Proton’s payload fairing is covered in thermal insulation, which ground teams will remove before liftoff.