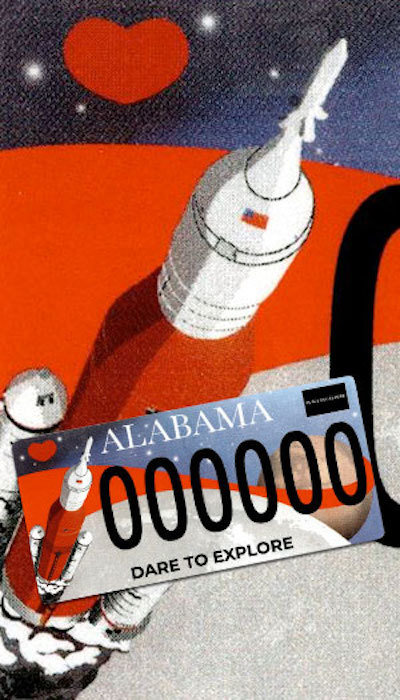 The new Alabama Space Tag offered by the Alabama Department of Revenue replaces the previous "Save the Saturn V" license plate and its depiction of the Apollo-era moon rocket with an illustration of NASA's new Space Launch System. (Alabama Dept. of Revenue)

Alabama has traded the glory of a past moon rocket for the promise of a new launch vehicle on the latest version of its space exploration-themed, specialty license plate.

The redesigned "Alabama Space Tag" replaces the depiction of the historic Saturn V booster— which 50 years ago launched the first astronauts to the moon — with NASA's new Space Launch System (SLS) heavy-lift rocket. The new plate marks the first time that the Saturn V has not appeared on an Alabama plate in 15 years.

The Alabama Department of Revenue began issuing the new Space Tag in May. Like the "Save the Saturn V" plate that it replaced, sales benefit the state's home for one of the three remaining Apollo-era rockets.

"The net proceeds of the $50 are distributed to the U.S. Space and Rocket Center Foundation to be used towards the Davidson Saturn V Center in Huntsville where the Saturn V is located," the department wrote on its website.

First introduced in 2005 after an almost year-long effort to garner the public interest needed to qualify for the new plate, the original Alabama "Save the Saturn V" tag was part of a successful $5 million fundraising effort that underwrote the restoration and housing of the rocket.

The dynamic test vehicle, Saturn V 500-D, had been exhibited outdoors at the U.S. Space & Rocket Center from 1970 through 2008, when the Davidson Center for Space Exploration opened to showcase the booster on horizontal display. A full-scale replica of the 363-foot-tall (110-meter) Saturn V was erected upright in the plaza leading into the Davidson Center.

The Space & Rocket Center, home to U.S. Space Camp, serves as the official visitor center for NASA's Marshall Space Flight Center, where the Saturn V was designed under the direction of Wernher von Braun and his team of engineers.

The original "Save the Saturn V" license plate depicted the rocket launching towards the moon. A silhouette of the International Space Station and the tagline "First to the Moon and Beyond" completed the 2005 design.

A 2014 update to the plate added illustrations of Earth and Mars and revised the depiction of the space station. The slogan remained the same.

With the Saturn V "saved," the funds raised by the specialty plate's sales were redirected to supporting new exhibits, exhibit maintenance and educational programs, according to the Space & Rocket Center at the time. By 2014, the tag had brought in $1.2 million for the museum.

The new Alabama Space Tag substitutes the Space Launch System for the Saturn V set against both the moon and Mars. A red ribbon extends between the two in a design similar to the logo of NASA's Artemis program, under which the SLS will fly. The 2020 plate replaces "First to the Moon and Beyond" with "Dare to Explore." 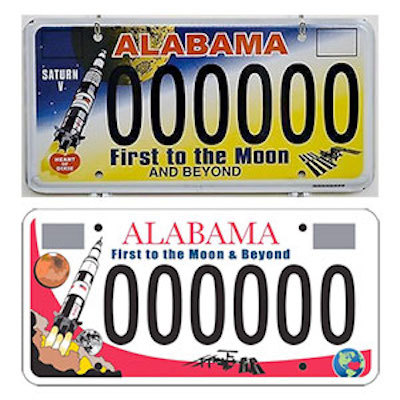 Alabama's original 2005 "Save the Saturn V" license plate (at top) and 2014 revision raised funds for the U.S. Space & Rocket Center in Huntsville, where one of the three remaining Saturn V rockets is on display. (Alabama Dept. of Revenue)
The space tag is available to Alabama motorists for $15 to $890, depending on the type of vehicle being registered. The plate may be personalized.

NASA is targeting late 2021 for the first uncrewed flight of the SLS rocket. Artemis 2, the first SLS planned to carry astronauts on a circumlunar mission, is slated for 2023. NASA is aiming to land the next man and first woman on the moon by 2024.

Alabama is not the only state to offer a space-themed specialty license plate. Florida, which issued the country's first specialty plate to honor the fallen crew of the Challenger, still offers a tag depicting the space shuttle that memorializes the astronauts who lost their lives in the 1986 tragedy and the 2003 ill-fated crew of the space shuttle Columbia.

The Texas Department of Motor Vehicles also offers a specialty plate honoring Columbia's final crew that depicts the orbiter over Earth under seven stars (Texas previously included the shuttle on its standard plate from 2000 to 2009). Ohio and Virginia also offer tags with space themes, including one by the latter featuring the NASA insignia for the space agency's Langley Research Center in Hampton.