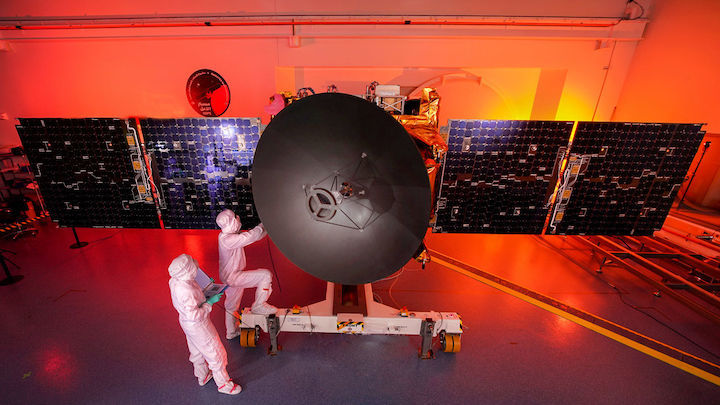 The Hope satellite will orbit Mars in a way that enables it to see the planet’s surface at all times of day.

The United Arab Emirates (UAE), a small Persian Gulf nation, is on the cusp of a big breakthrough: joining the United States, the Soviet Union, Europe, and India in the elite club of nations that have successfully sent spacecraft to Mars. On 15 July, the Emirates Mars Mission (EMM)—also known as the Hope satellite—is set to launch on a Japanese rocket, arriving at the Red Planet in February 2021.

Planners hope the mission will boost UAE industry and science capacity while also delivering sorely needed data on the martian atmosphere. “One of the primary objectives of the mission from the start was to do science that is relevant to the international community,” says Sarah Amiri, Hope’s science lead.

Most of the six spacecraft now at Mars are in polar orbits that only offer views of the surface at fixed times of day. But Hope will be inserted into an inclined orbit that provides a view of any given point at a different time on each orbit. A camera and infrared spectrometer will collect data about dust, moisture, and ozone in the lower atmosphere, while an ultraviolet spectrometer will measure carbon monoxide, hydrogen, and oxygen in the upper atmosphere.

The data will fill in gaps in computer models of the martian atmosphere, says Francois Forget, a member of the Hope science team at the Laboratory of Dynamic Meteorology. Primed by observations, these global climate models (GCMs) rely on basic physical laws to make predictions about the weather and climate. Yet at Mars, “we observe some processes which we cannot represent using our universal equations,” Forget says. For example, the models cannot reproduce how atmospheric dust is distributed or explain why some dust storms grow into global events that completely shroud the planet. Monitoring the atmosphere throughout the day may help solve these enigmas, Forget says.

Lori Neary, who models the martian atmosphere at the Royal Belgian Institute for Space Aeronomy and isn’t involved with the mission, is also looking forward to its data. “The more instruments that are taking measurements of Mars, the better,” she says. She hopes the data will help her team understand daily changes in ozone levels, which depend strongly on sunlight. Continuous EMM data will help calibrate model predictions for ozone levels throughout a martian day.

The mission has given equal weight to building capacity for space science research in the UAE. “This mission created expertise in the country in areas we never had expertise in before,” says Amiri, who was a program engineer on the UAE’s DubaiSat satellites before becoming EMM science lead and, later, UAE’s minister of State for Advanced Science. Emirati aerospace firms enhanced their know-how by manufacturing many of Hope’s precision components. Hope was tested in the nation’s first double-story clean room, which will now be used for future projects, including university built drones and small cube satellites.

The mission has also spurred an interest in science at Emirati universities, which have launched five new undergraduate science programs and a graduate program in physics. At the University of Sharjah, the number of students in applied physics and astronomy has doubled since the start of the EMM.

A science apprenticeship program, built into the mission itself, has also helped build expertise. When the EMM was conceived in 2014, the UAE had only a handful of planetary scientists but plenty of trained engineers. The team realized “the best way was to retool engineers to think like scientists,” Amiri recalls. The program matches Emirati engineers with scientists at partner institutes. For example, Hessa Al Matroushi, the EMM data management and analysis lead, originally trained as an image processing engineer, but shifted gears by apprenticing with scientists on NASA’s MAVEN mission, which studies Mars’s upper atmosphere. “The experience taught me how to be flexible, how to handle scientific data, filter it and analyze it,” she says.

Many of the apprentices plan to continue as space scientists after the mission. “This is where we see our future,” Al Matroushi says.