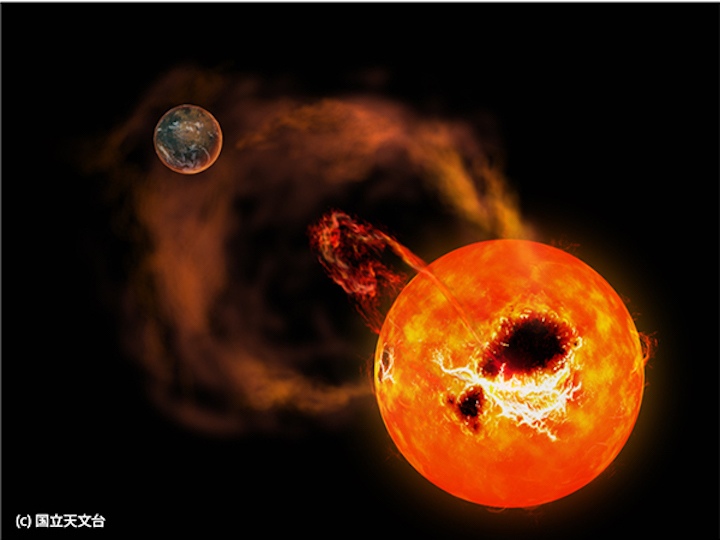 Observing the stellar flares on AD Leonis 16 light years away. Its lower temperature makes it a prime target to study flares and the more explosive 'superflare'. (credit: National Astronomical Observatory of Japan)

Japan -- The cold, dark chaos of space is filled with mystery.

Fortunately, the ways in which we can peer into the mists of the void are increasing, and now include Kyoto University's 3.8 meter Seimei telescope.

Using this new instrument -- located on a hilltop in Okayama to the west of Kyoto -- astronomers from Kyoto University's Graduate School of Science and the National Astronomical Observatory of Japan have succeeded in detecting 12 stellar flare phenomena on AD Leonis, a red dwarf 16 light years away. In particular, one of these flares was 20 times larger than those emitted by our own sun.

"Solar flares are sudden explosions that emanate from the surfaces of stars, including our own sun," explains first author Kosuke Namekata.

"On rare occasions, an extremely large superflare will occur. These result in massive magnetic storms, which when emitted from our sun can significantly effect the earth's technological infrastructure."

Hence understanding the properties of superflares can be vital, but their rareness means that data from our sun is difficult to gather. This has led researchers to look for exoplanets similar to earth, and to examine the stars they orbit.

Writing in the Publications of the Astronomical Society of Japan, the team reports on a long week of setting the sights of Seimei -- along with other observational facilities -- to AD Leonis.

This M-type red dwarf has temperatures lower than that of our sun, resulting in a high incidence of flares. The team expected a number of these to be large, and were astounded to then detect a superflare on their very first night of observations.

"Our analyses of the superflare resulted in some very intriguing data," Namekata explains.

Light from excited hydrogen atoms of the superflare exhibited an amount of high-energy electrons roughly one order of magnitude greater than typical flares from our sun.

"It's the first time this phenomenon has been reported, and it's thanks to the high precision of the Seimei Telescope," says Namekata.

The team also observed flares where light from excited hydrogen atoms increased, but did not correspond with an increase in brightness across of the rest of the visible spectrum.

"This was new for us as well, because typical flare studies have observed the continuum of the light spectrum -- the broad range of wavelengths -- rather than energy coming from specific atoms," continues Namekata.

The high-quality of these data was thanks to the new telescope, which the team hopes will opendoors to new revelations regarding extreme space events.

"We may even be able to begin understanding how these emissions can affect the existence -- or emergence -- of life on other planets."