The United Arab Emirates is preparing to launch its first Martian satellite, Hope, which will search for clues to the Red Planet’s atmospheric mysteries. 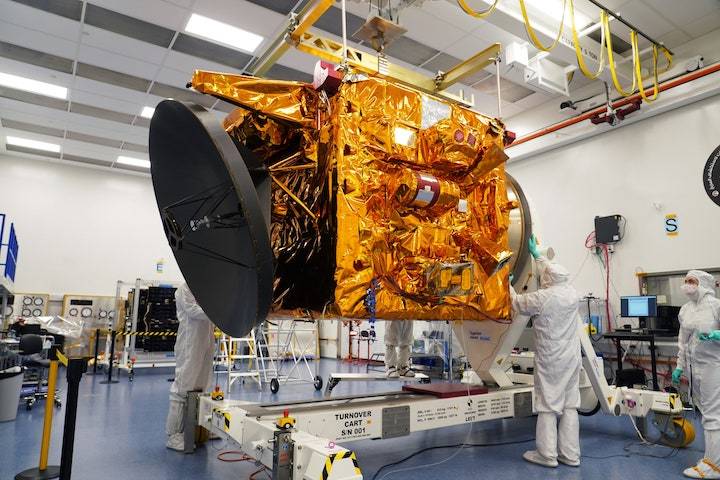 SARAH BINT YOUSIF Al-Amiri knows what it’s like to build a spacecraft, but she’s never launched one to Mars—or during a global pandemic. As the deputy project manager for the United Arab Emirates’ first interplanetary mission—and the country’s minister of state for advanced sciences—the 33-year-old engineer has spent the past few years bouncing between Dubai and Boulder, Colorado, where a team of Emirati scientists have been busy building a robotic satellite meteorologist called Hope. These days, Al-Amiri is quarantining near the Tanegashima Space Center in Japan, where Hope is expected to depart on a seven-month journey to the Red Planet next week.

Hope is a boxy satellite the size of a small car that will use three main instruments—an imager and two gas spectrometers—to study the Martian atmosphere. Its altitude above the planet will range from 12,000 to 25,000 miles above the surface, due to its elliptical orbit, which will take 55 hours to complete. The data collected by Hope will help scientists understand how conditions observed on the surface by rovers like Opportunity interact with the atmosphere and affect the Martian climate.

But for the past two months, Al-Amiri’s been focused on more mundane concerns, like making sure her team could get exemptions to fly into Japan to prepare the spacecraft, which will launch on a rocket made by Mitsubishi Heavy Industries. At the same time, she’s been pulling together last-minute pandemic contingency plans to ensure that the craft could still launch even with a skeleton crew. Mars only makes a close approach to Earth every two years, and if the team doesn’t hit the six-week launch window this year, they’ll have to wait until late 2022 to try again.

“It was a nightmare trying to align people’s schedules and get everyone here safely,” Al-Amiri says. “Thankfully, the most critical tests were done before the pandemic started, because two days after the team flew in, Japan imposed a two-week quarantine.”

Hope arrived in Japan in late April, and engineers began integrating the satellite with the rocket fairing a few days ago. But testing on the spacecraft continues apace. The UAE’s first jaunt into deep space is an important mission for the country both symbolically and technically, and it's up to Al-Amiri and her colleagues to make sure everything goes perfectly.

The UAE may be small—it’s about the size of South Carolina—but it’s oil-rich. About a decade ago, its government started pouring its national wealth into fostering science and engineering talent. The country’s promotional materials call this a transition to a “knowledge economy” and frame it as a way to reduce the Emirates’ reliance on oil and natural gas exports. But Al-Amiri simply sees it as an investment in the future—and for the UAE, the future is in space. “We’re looking at the long-term exploration of Mars,” Al-Amiri says.

The UAE became an independent country in 1971 and only founded its national space agency in 2014, but the government has already funneled more than $6 billion toward extraterrestrial ambitions. And that investment is starting to pay dividends. Last year, the Emirati space agency sent its first astronaut, Hazzaa Al Mansoori, for an eight-day trip to the International Space Station, and it has several more astronauts in training. Agency officials are also building a simulated Mars colony in the desert in a nod to their plan to one day put boot prints on Martian soil. But the crown jewel of the space program is the Hope Mars mission, which is as much about showing that the UAE can hold its own among the space superpowers as it is about science.

“When the UAE was created, some countries were already sending things to space,” says Omran Sharaf, the program manager for the Hope mission. “To catch up requires us to be much faster than other nations. The moon is difficult, but Mars is much more difficult. And if a young nation like the UAE can reach Mars, then it shows you can do much more.”

If everything goes according to plan, the UAE will become just the fifth country to successfully put a spacecraft on or around Mars. But the Hope mission will also be marked by a number of firsts. It’s the first interplanetary mission launched by a majority Arab country, it will be the first time a Japanese rocket has launched a spacecraft to Mars, and if all goes well, Hope will be the first spacecraft to get a comprehensive understanding of the tenuous Martian atmosphere. Planetary scientists believe that Mars was once sheathed in a thick layer of carbon dioxide, but that this atmosphere was rapidly stripped away by solar winds in the early days of the solar system. Once Hope arrives in orbit next February, it will track seasonal atmospheric changes over the course of a full Martian year, which is the equivalent of two Earth years, and give researchers better insight into this process.

Hope will help fill in the gaps in understanding left by NASA’s Maven orbiter, which has been studying the Red Planet’s atmosphere since 2014. Maven was built to observe the dynamics of the upper atmosphere, says Bruce Jakosky, a planetary scientist at the University of Colorado, Boulder, and Maven’s lead researcher, but its instruments weren’t designed to get a good look at what was happening closer to the surface. Hope is outfitted with three instruments that will allow it to study the lower Martian atmosphere at different wavelengths to understand how it interacts with the upper atmosphere and the rest of the planet to create seasonal weather patterns.

“Maven couldn’t do everything,” says Jakosky, who was a scientific adviser for the Hope mission. “In designing the Hope mission, we wanted to pick areas that were important, yet not really addressed by earlier missions. And our experience with Mars is that every time you make a new type of measurement, you make fundamental discoveries about the behavior of the system.”

For example, Hope will shed light on a Martian mystery uncovered by Maven, which detected large plumes of hydrogen escaping from the planet. The hydrogen likely comes from atmospheric water vapor split apart by sunlight in the lower atmosphere, but the processes that cause it to escape into space aren’t well understood. They’re worth figuring out, though. Geological evidence collected by Martian orbiters and rovers suggests that a younger Mars may have hosted vast oceans of liquid water on its surface around 4 billion years ago. But today the planet is cold, dry, and barren. Studying its atmosphere may tell us how it became this way, and whether conditions were ever conducive to life.

“We know that Mars used to have a much thicker atmosphere, it was warmer, and it was wetter,” says Tanya Harrison, the science programs manager at Planet, an Earth-imaging satellite company, who previously worked on NASA’s Curiosity Mars rover. “The big questions are, how did the atmosphere get to the point it’s at today, and what’s causing it to blow into space?”

The Hope spacecraft may be on a mission to Mars, but its architects also underscore its importance for people back on Earth. The Emiratis and their neighbors are expected to be hit especially hard by climate change; some projections forecast that large swathes of the Middle East will be uninhabitable by the middle of the century due to drought and soaring temperatures. Sharaf says that the skills gained from launching and operating Hope will help Emirati scientists and engineers develop the technical skills they need to deal with climate change on Earth.

“We are in a rough region and have serious challenges here when it comes to water resources and food resources,” says Sharaf. “We need scientists and engineers to address these challenges. That’s why we’re sending this mission to Mars—it’s about the post-oil economy and developing the skills and knowledge that will, sooner or later, come back to Earth. ”

The development of Hope was a uniquely collaborative process, says Al-Amiri. Although the spacecraft is entirely funded and designed by the UAE, its instruments were built in the United States at various universities and the spacecraft was assembled at the University of Colorado, Boulder. But UAE leaders weren’t interested in simply renting US experts as contractors for their spacecraft; they wanted their engineers to be intimately involved and learn from the process. So Sharaf led a team of several Emirati engineers who moved to Colorado to work side-by-side with American scientists.

This is a collaborative model familiar to Al-Amiri and her Emirati colleagues who partnered with South Korea to develop the UAE’s first Earth-observation satellites years ago. But it's a relatively unique approach among national space programs, which have historically developed spacefaring expertise internally. Al-Amiri says this wasn’t an option for the Mars team, since UAE prime minister Mohammed bin Rashid Al Maktoum wanted the spacecraft’s arrival at Mars to coincide with the country’s 50th anniversary next year. “We knew very early on that we only had a short amount of time,” says Al-Amiri.

Still, going from a Mars mission concept to launch in just six years is a huge ask, and Al-Amiri says it speaks to the talents of the Emirati engineers working on the project, the majority of whom are under age 35. “It’s a relatively young team, but the UAE is a relatively young country, so it’s not odd for us,” says Al-Amiri, who pointed out that most NASA engineers, astronaut candidates, and mission control operators were also in their late twenties and early thirties during the Apollo program. “Having a young team didn’t hinder the process. It was a great learning opportunity, which was the overall objective of this mission.”

The Hope mission will kick off a busy month of Mars launches by space agencies that want to take advantage of the planet’s closest approach to Earth in more than 2 years. Next up is China, which is expected to launch its first dedicated Mars mission, Tianwen-1, between July 20 and 25. This mission will incorporate both a rover and an orbiter that will scout for signs of life in the Martian soil.

Finally, NASA will launch its next-generation Mars rover, Perseverance, on a mission to collect samples that will be returned to Earth later this decade. NASA’s mission is currently scheduled to launch on July 30, but it has been delayed multiple times due to problems discovered during vehicle checkout. The agency has until August 15 to launch, otherwise it will have to wait another two years for Mars to make another close pass. And with any luck, Hope will be there to greet the rover when it arrives.