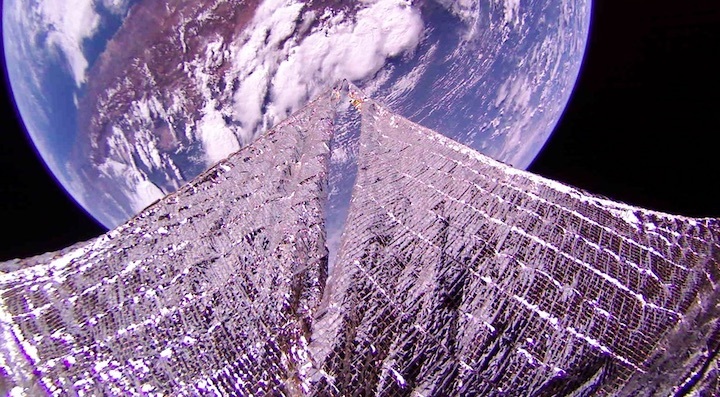 WASHINGTON — A smallsat launched a year ago to demonstrate solar sail technologies continues to operate and is now beginning an extended mission.

LightSail 2, a cubesat launched in June 2019 to demonstrate that a solar sail could change the orbit of a spacecraft, formally started an extended mission June 25, the one-year anniversary of its launch on a Falcon Heavy as one of the payloads on the Space Test Program 2 mission.

LightSail 2 was deployed by another smallsat, Prox-1, days after launch and, later in July, deployed a 32-square-meter Mylar sail. The Planetary Society, which funded the mission, declared the mission a success at the end of July 2019 because the spacecraft had changed its orbit using the sail.

“We are going to a higher orbital altitude without rocket fuel, just from the push of sunlight,” Bill Nye, chief executive of The Planetary Society, said in a briefing then about LightSail 2.

At a June 25 webinar to mark the one-year anniversary of the launch and the beginning of LightSail 2’s extended mission, Planetary Society officials focused more on the solar sail’s ability to control the spacecraft’s orbit rather than raise it. “Our overarching goal, technologically, was to demonstrate controlled cubesat solar sail propulsion,” said Bruce Betts, LightSail program manager and chief scientist at The Planetary Society. “We’ve done that.”

When the organization announced the initial success of LightSail 2 last year, they said they expected atmospheric drag to soon overwhelm the thrust from the sail, causing the spacecraft’s orbit to decay. At the time, they thought LightSail 2 could reenter within a year.

However, the spacecraft remains in orbit at an average altitude of more than 700 kilometers. David Spencer, LightSail 2 project manager, said that when the solar sail is controlled, the spacecraft’s orbit decays at about 20 meters per day. When the sail is not actively controlled, the orbit decays at a rate of 34 meters per day. The difference, he said, “is the effect we’re having in terms of sail control, using solar pressure to fight atmospheric drag.”

In the extended mission, spacecraft controllers will continue to optimize the performance of the sail. The Planetary Society has an agreement with NASA to share information on LightSail 2 to aid the development of NEA Scout, a NASA cubesat mission that will use a solar sail to fly by a near Earth asteroid. NEA Scout is a secondary payload on Artemis 1, the first Space Launch System mission, scheduled to launch late next year.

How long LightSail 2 will remain in orbit isn’t clear. “A lot of it depends on how effective we are in solar sailing,” Spencer said. However, he concluded it’s likely the spacecraft will remain in orbit well into 2021. “I would guess it’s going to be some time next year, the second half of next year” before it deorbits.

Planetary Society executives, as they did last year, said there are no plans for the organization to pursue a LightSail 3 mission of some kind. “We’re not the ‘Solar Sailing Society.’ This is not our business,” said Jennifer Vaughn, chief operating officer of the organization.

Instead, she said the society will look more broadly for ideas, which could include solar sails as well as other technologies, that can be advanced by the organization through contributions from its members, as was the case with the LightSail program. “We’re going to continue what we’ve always done, which it to look for great project ideas that need crowdfunding and support, and put our money in those directions,” she said. That will be done through an open call for proposals issued every other year.

“This is consistent with what we have done for years,” Nye said of plans to seek proposals for new projects. “We’re going to be looking for the next cool thing.”