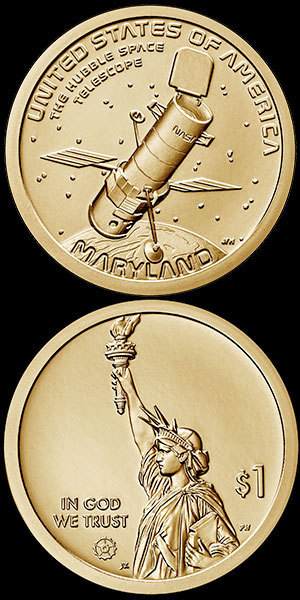 The official artwork for Maryland's entry in the U.S. Mint's American Innovation $1 coin program highlights the Hubble Space Telescope and the state's role in managing the orbiting observatory from the ground. The coin is depicted in uncirculated condition. (U.S. Mint)

The Hubble Space Telescope will be honored on a new golden dollar coin reflecting the innovation embodied by the orbiting observatory and the U.S. state from where it is managed on the ground.

The United States Mint on Tuesday (June 30) revealed the official design for Maryland's entry in the American Innovation $1 coin program, highlighting the Hubble Space Telescope. The coin will be one of four golden dollars issued this year as part of an ongoing series to "pay homage to America's ingenuity and celebrate the pioneering efforts of individuals or groups from all 50 states, the District of Columbia and the U.S. territories."

Maryland's coin, created and sculpted by the Mint's chief engraver, Joseph Menna. depicts the Hubble Space Telescope orbiting Earth, surrounded by a field of stars. NASA's recently-resurrected logotype, affectionately called the "worm," is included on the coin on the telescope's body, as it appears on the real spacecraft.

The inscriptions at the top and bottom of the coin, including "United States of America," "The Hubble Space Telescope" and "Maryland," are also rendered in a font styled after the iconic NASA logotype.

The obverse, or heads-side, of the coin reproduces the same representation of the Statue of Liberty as is common to the entire American Innovation series.

The chosen Hubble Space Telescope artwork was recommended to the U.S. Mint by both the Commission of Fine Arts and Citizens Coinage Advisory Committee from a selection of 16 candidate designs, six of which focused on the observatory. The Maryland Governor's Office also suggested the mapping of the human genome as a possible theme, given that the National Human Genome Research Institute is located in Bethesda.

The Hubble is managed by NASA's Goddard Space Flight Center in Greenbelt and the Space Telescope Science Institute in Baltimore.

Named for American astronomer Edwin Hubble, the observatory was launched and released into Earth orbit by the space shuttle Discovery's STS-31 crew in April 1990. Three years later, the first of five servicing missions corrected a flaw in the telescope's primary mirror, allowing for the start of three decades of astronomical discoveries.

"Data transmission — transmitted by Hubble — has helped refine estimates of the age of the universe, trace the growth of galaxies, identify planets beyond our solar system, study the planets within our solar system, identify black holes, observe the birth and death of stars, and many other scientific discoveries," April Stafford, director of the U.S. Mint's Office of Design Management, said during a review of the coin's potential designs in September 2019.

The Maryland American Innovation $1 coin will be issued in uncirculated and proof conditions. A release date has not yet been announced.

Maryland's coin will be the second entry in the Innovation series to feature a space or astronomy theme. The first, issued for Delaware on Nov. 7, 2019, honored astronomer Annie Jump Cannon, who invented a system for classifying the stars that is still in use today. 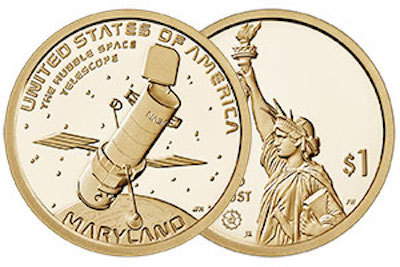 A third possible space-design was put forth by New York with its inclusion of the Apollo Lunar Module among its coin's suggested themes. The Commission of Fine Arts and Citizens Coinage Advisory Committee, however, passed on the moon lander and recommended art featuring the Erie Canal instead. The Secretary of the U.S. Treasury will make the final decision, leading up to New York's American Innovation $1 coin being issued in 2021.