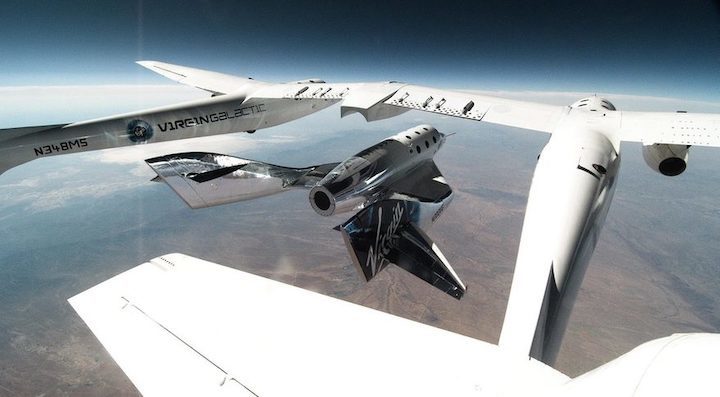 WASHINGTON — Virgin Galactic conducted its second test flight of its SpaceShipTwo suborbital vehicle from its New Mexico spaceport June 25 and now says it is ready to resume powered flights of the spacecraft.

The SpaceShipTwo vehicle, named VSS Unity, carried out the glide flight in the skies above Spaceport America. It was the second free flight of the vehicle at the spaceport, after a glide flight that took place May 1. That took place about two and a half months after the company related the vehicle there from California.

The company billed this flight as a “high speed” test of SpaceShipTwo, with the spacecraft reaching speeds of up to Mach 0.85 during its descent. The higher speed, the company said in a statement, was designed to test how the vehicle handles at conditions closer to that during powered flight. Pilots Mark “Forger” Stucky and Michael “Sooch” Masucci also conducted a series of maneuvers to compare the vehicle’s performance to similar maneuvers at slower speeds.

The completion of the test, the company said, now allows it to resume powered test flights. “It was an important test that, pending data review, means we can now start preparing the vehicles for powered flight,” George Whitesides, chief executive of Virgin Galactic said in a statement.

SpaceShipTwo last performed a powered test flight in February 2019 from Mojave, California, carrying three people above the 80-kilometer altitude that the company, as well as U.S. government agencies, define as the boundary of space. Since then, the company has been outfitting the cabin interior and performing other modifications to the vehicle.

Virgin Galactic said in the statement that it still has “final modifications” to complete in the SpaceShipTwo customer cabin as well as detailed inspections of the vehicle. The company did not announce a schedule for resuming powered test flights.

The powered test flights mark the final phase of testing of the vehicle before it is ready to carry customers. While the company last year said it expected to begin commercial service in mid-2020, it has since backed away from that schedule, stating in a May 5 earnings call that its focus for this year is getting the vehicle ready for commercial service.

Whitesides reiterated those plans in the statement about the latest test flight. “Our focus for this year remains unchanged on ensuring the vehicles and our operations are prepared for long-term, regular commercial spaceflight service,” he said.

In a break from tradition, the company did not provide updates about the flight on social media. Instead, the company issued a press release early in the day announcing the upcoming flight and another announcing the outcome several hours after the flight. The statement did not disclose exactly when the test took place, but according to flight tracking data SpaceShipTwo was released from its WhiteKnightTwo carrier aircraft at about 11:33 a.m. Eastern, a little more than an hour after takeoff from Spaceport America, and landed less than ten minutes later.

“Please note: we will not be providing social media updates during the flight due to it taking place during market hours,” the company said in one tweet announcing the upcoming flight. The company, which has been publicly traded on the New York Stock Exchange since last October, had provided updates during previous tests, including the May 1 flight.

The announcement of the test flight had little effect on Virgin Galactic’s shares, which closed down nearly 2% in trading. The company announced the successful outcome of the test shortly after the markets closed. 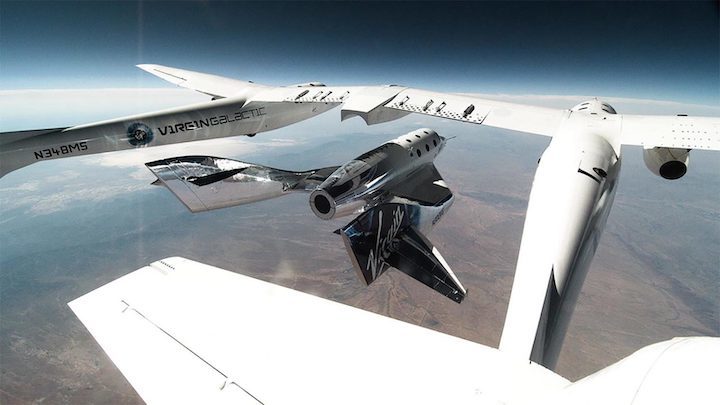 LAS CRUCES, N.M. June 25, 2020 -Virgin Galactic Holdings, Inc. (NYSE: SPCE) (“Virgin Galactic” or “the Company”) today announced the successful completion of the second SpaceShipTwo test flight from Spaceport America. This flight follows the completion of the first test flight from the Company’s commercial headquarters in New Mexico on May 1, 2020, and marks another important milestone as the team progresses toward the launch of Virgin Galactic’s commercial service.

This glide flight, flown at higher speeds, allowed the team to continue to evaluate systems and vehicle performance in advance of future rocket-powered space flights from the Company’s new operating base in New Mexico.  Flying VSS Unity in glide configuration at higher speeds enables certain vehicle systems to operate close to the environment seen during phases of rocket boost on a spaceflight. The spaceship achieved a glide speed of Mach 0.85 after being released from the mothership VMS Eve at an altitude of 51,000 ft.  Unity completed multiple test-points before touching back down smoothly for a runway landing at Spaceport America.

Forger and Sooch performed a series of maneuvers with Unity designed to gather data about performance and handling qualities while flying at higher speeds. This data will be verified against similar maneuvers that were performed in the previous glide flight to enhance aerodynamic modelling.

The test flight was conducted under a set of stringent operational protocols to ensure safety against COVID-19. These protocols include changes to the work areas and procedures to enforce social distancing as advised by state guidelines as well as universal mask usage.

Pending the completion of an extensive data review of this flight, the team will start preparing for the next stage of our flight test program – powered spaceflights from Spaceport America.  In addition to the data review, we have several steps to complete, including final modifications to the spaceship customer cabin and detailed inspections of the vehicle and systems.

Governor Michelle Lujan Grisham said: “I’m excited by the continued progress Virgin Galactic has made in New Mexico and confident in their work going forward. Our state has the opportunity to be a leader in commercial spaceflight, and partners like Virgin Galactic are leading the way.”

George Whitesides, CEO of Virgin Galactic and The Spaceship Company said: “I am thrilled with the team’s hard work to complete today’s test flight successfully. It was an important test that, pending data review, means we can now start preparing the vehicles for powered flight.  Our focus for this year remains unchanged on ensuring the vehicles and our operations are prepared for long-term, regular commercial spaceflight service.”