Pluto may be a more habitable world than scientists had thought 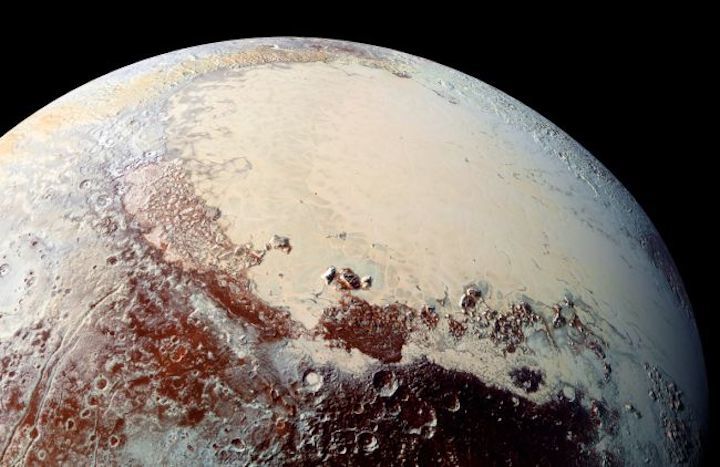 Pluto, as seen by NASA's New Horizons spacecraft during its historic flyby of the dwarf planet in July 2015.
(Image: © NASA/JHUAPL/SwRI)

Though Pluto is now famously frigid, it may have started off as a hot world that formed rapidly and violently, a new study finds.

This result suggests Pluto may have possessed an underground ocean since early on in its life, potentially improving its chances of hosting life, researchers said.

Previous work assumed Pluto originated from cold and icy rock clumping together in the distant Kuiper Belt, the ring of objects beyond Neptune's orbit. Although there is evidence that Pluto currently possesses a liquid ocean beneath its thick frozen shell, researchers have suggested this subsurface ocean developed long after Pluto formed, after ice melted due to heat from radioactive elements in Pluto's core.

Now scientists argue that instead of a cold formation, Pluto had a hot start, one full of explosive force.

"When we look at Pluto today, we see a very cold frozen world, with a surface temperature of about 45 Kelvin [minus 380 degrees Fahrenheit, and minus 228 degrees Celsius]," study lead author Carver Bierson, a planetary scientist at the University of California, Santa Cruz, told Space.com. "I find it amazing that by looking at the geology recorded in that surface, we can infer Pluto had a rapid and violent formation that warmed the interior enough to form a subsurface water ocean."

The scientists compared geological observations of Pluto captured by NASA's New Horizons spacecraft, which flew by the dwarf planet in 2015, with various models of Pluto's origin and evolution. If Pluto had a cold start, its frozen shell would have experienced compression early in the world's history as heat from radioactive elements melted ice, and then extension later on after these radioactive elements broke down and Pluto cooled. However, they found the most ancient portions of Pluto's surface imaged at high resolution do not show any clear signs of compression. 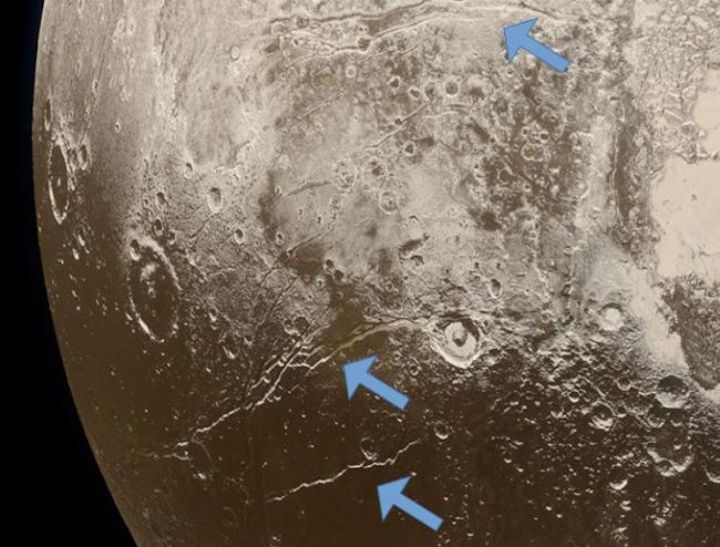 If Pluto had a rapid, violent formation, the heat from the colliding rocks from which Pluto coalesced would have faded relatively quickly, leading the icy shell to grow rapidly, generating extensional features early in Pluto's history. This freezing would pause as heat from radioactivity became a major factor, and resume as radioactive elements broke down, slowly creating extensional structures over time.

Extensional features the researchers saw on Pluto's icy surface — for instance, cracks in its shell, and an enigmatic system of ridges and troughs — suggest Pluto had a hot start.

"I think the most exciting implication is that subsurface oceans may have been common among the large Kuiper Belt objects when they formed," Bierson said.

These findings suggest that Pluto and other large dwarf planets in the Kuiper Belt, such as Eris, Makemake and Haumea, may have possessed subsurface oceans ever since they formed. This may have influenced the potential habitability of these distant icy worlds, the researchers said.

"At this point, we don't know the ingredients or recipe needed for life to emerge on any world," Bierson said. Still, "we think liquid water is an important ingredient, and this work suggests Pluto has had that for a long time."

Bierson did caution that New Horizons could only take high-resolution images of about half of Pluto's northern hemisphere.

"Maybe by chance we missed some ancient terrain that recorded large-scale compression," he said. "You can imagine that if you only looked at the geology of one-quarter of Earth's surface, you could learn a lot, but you would also be missing some context. For now, we can only work with what we have. It would take another spacecraft to go back and image the rest of the surface to really find out what we missed."

The scientists detailed their findings online June 22 in the journal Nature Geoscience.

The accretion of new material during Pluto’s formation may have generated enough heat to create a liquid ocean that has persisted beneath an icy crust to the present day, despite the dwarf planet’s orbit far from the sun in the cold outer reaches of the solar system.

This “hot start” scenario, presented in a paper published June 22 in Nature Geoscience, contrasts with the traditional view of Pluto’s origins as a ball of frozen ice and rock in which radioactive decay could have eventually generated enough heat to melt the ice and form a subsurface ocean.

“For a long time people have thought about the thermal evolution of Pluto and the ability of an ocean to survive to the present day,” said coauthor Francis Nimmo, professor of Earth and planetary sciences at UC Santa Cruz. “Now that we have images of Pluto’s surface from NASA’s New Horizons mission, we can compare what we see with the predictions of different thermal evolution models.”

Because water expands when it freezes and contracts when it melts, the hot-start and cold-start scenarios have different implications for the tectonics and resulting surface features of Pluto, explained first author and UCSC graduate student Carver Bierson.

“If it started cold and the ice melted internally, Pluto would have contracted and we should see compression features on its surface, whereas if it started hot it should have expanded as the ocean froze and we should see extension features on the surface,” Bierson said. “We see lots of evidence of expansion, but we don’t see any evidence of compression, so the observations are more consistent with Pluto starting with a liquid ocean.”

The thermal and tectonic evolution of a cold-start Pluto is actually a bit complicated, because after an initial period of gradual melting the subsurface ocean would begin to refreeze. So compression of the surface would occur early on, followed by more recent extension. With a hot start, extension would occur throughout Pluto’s history.

“The oldest surface features on Pluto are harder to figure out, but it looks like there was both ancient and modern extension of the surface,” Nimmo said.

The next question was whether enough energy was available to give Pluto a hot start. The two main energy sources would be heat released by the decay of radioactive elements in the rock and gravitational energy released as new material bombarded the surface of the growing protoplanet.

Bierson’s calculations showed that if all of the gravitational energy was retained as heat, it would inevitably create an initial liquid ocean. In practice, however, much of that energy would radiate away from the surface, especially if the accretion of new material occurred slowly.

“How Pluto was put together in the first place matters a lot for its thermal evolution,” Nimmo said. “If it builds up too slowly, the hot material at the surface radiates energy into space, but if it builds up fast enough the heat gets trapped inside.”

The researchers calculated that if Pluto formed over a period of less that 30,000 years, then it would have started out hot. If, instead, accretion took place over a few million years, a hot start would only be possible if large impactors buried their energy deep beneath the surface.

The new findings imply that other large Kuiper belt objects probably also started out hot and could have had early oceans. These oceans could persist to the present day in the largest objects, such as the dwarf planets Eris and Makemake.

“Even in this cold environment so far from the sun, all these worlds might have formed fast and hot, with liquid oceans,” Bierson said.

In addition to Bierson and Nimmo, the paper was coauthored by Alan Stern at the Southwest Research Institute, the principal investigator of the New Horizons mission.

Quelle: THE UNIVERSITY OF CALIFORNIA
Astronomie - Surprise! Pluto may have had an underground ocean from the very beginning
« Zum vorherigen Eintrag Zum nächsten Eintrag »
1027 Views
Created with page4