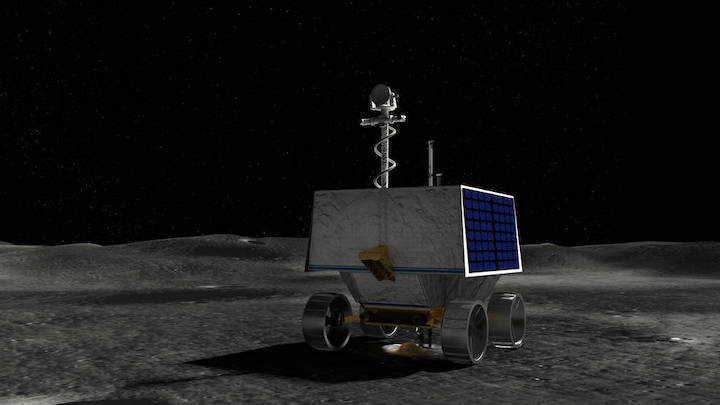 As the first resource-mapping mission on the surface of another world, VIPER will help pave the way for a new era of human missions to the lunar surface and will bring NASA a step closer to developing a sustainable, long-term robotic and human presence on the Moon as part of the Artemis program.

Members of the media may request to join the teleconference by emailing their name, affiliation, and phone number to Alison Hawkes at alison.hawkes@nasa.gov or Rachel Kraft at rachel.h.kraft@nasa.gov by 12:30 p.m. June 10.

The teleconference audio will stream live at:

Supporting materials also will be available at nasa.gov/live.

NASA has awarded nearly $200 million to deliver a water-seeking, robotic rover to the moon in the coming years as a pathfinder for the agency's ambitions to put humans back on the surface by 2024.

Astrobotic, a Pittsburgh-based company, will deliver the Volatiles Investigating Polar Exploration Rover, or VIPER, to the moon in 2023 under a $199.5 million contract announced Thursday. The 1,000-pound rover will be delivered to the surface via the company's Griffin landing system and seek out water at the lunar south pole.

The selection is part of NASA’s Commercial Lunar Payload Services, or CLPS, program.

The fixed-price contract puts the onus on Astrobotic to choose a launch provider and rocket. A final selection has not yet been made, so it remains to be seen how much of the $200 million will go toward launch services.

"VIPER is going to be the first robot to actually 'touch' the water ice that we've detected from many different previous missions," Astrobotic CEO John Thornton told reporters Thursday. "From a commercial perspective, the discovery of water ice at the pole is potentially a massive breakthrough for opportunities in space because we can turn that water into rocket fuel and the moon can become a destination for refueling spacecraft."

Astrobotic's VIPER lunar rover is deployed from the Griffin lander in this company rendering released on Thursday, June 11, 2020. The rover will launch in 2023 as a pathfinder to study to moon before NASA's Artemis program takes astronauts back a year later.
Astrobotic

Over the course of 100 Earth days, VIPER will be tasked with collecting data on the concentrations and locations of water, building the foundation for the moon's first resource map. Aside from its suite of instruments, the rover will also have a three-foot drill for boring into the surface.

Finding useable resources there is critical to NASA's Artemis program, which aims to put a man and the first woman on the surface by 2024. By 2028, the agency hopes to establish a permanent presence, meaning sources of fuel could be critical toward long-term habitation and possibly even future trips to Mars.

"VIPER and the many payloads we will send to the lunar surface in the next few years are going to help us realize the moon's vast scientific potential," said Thomas Zurbuchen, NASA's associate administrator for science.

Astrobotic, which is building another lunar spacecraft known as Peregrine, has separately selected United Launch Alliance's future Vulcan Centaur rocket for a 2021 mission to deliver more than a dozen payloads to the moon. That flight, valued last year at $79.5 million, is also part of NASA's CLPS program and should provide more insight into navigation and precision landing operations.