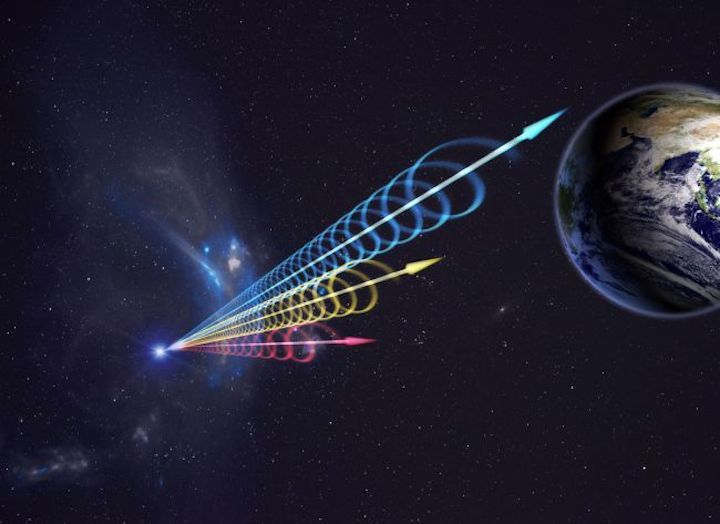 Astronomers have discovered an activity cycle in another fast radio burst, potentially unearthing a significant clue about these mysterious deep-space phenomena.

Fast radio bursts, or FRBs, are extragalactic flashes of light that pack a serious wallop, unleashing in a few milliseconds as much energy as Earth's sun does in a century. Scientists first spotted an FRB in 2007, and the cause of these eruptions remains elusive nearly a decade and a half later; potential explanations range from merging superdense neutron stars to advanced alien civilizations.

More than 100 FRBs have been discovered to date, and most of them are one-offs, flaring up just a single time (as far as we know). In January of this year, astronomers reported that one member of the "repeater" class, called FRB 180916.J0158+65, appears to exhibit a 16-day activity cycle: It fires off bursts for a four-day stretch, goes quiet for 12 days and then starts all over again.

The FRB 180916 was the first known to erupt in such a periodic way. And now scientists have spotted another.

Researchers monitored the known repeater FRB 121102 with the Lovell Telescope, a 250-foot-wide (76 meters) radio dish at Jodrell Bank Observatory in England, over the course of five years. They found strong indications of a 157-day activity cycle; 121102 seems to flare up for 90 days and then go silent for 67, the team reported in a new study.

It's unclear what's behind such cyclic activity, though scientists do have a few ideas. For example, periodic flare-ups could be caused by a wobble in the rotational axis of a highly magnetized neutron star known as a magnetar. Or they could be linked to the orbital motions of a neutron star in a binary system.

The wobble effects are expected to manifest over the span of a few weeks, study team members said. So they seem compatible with FRB 180916's 16-day cycle but not with that of FRB 121102, which is 10 times longer. But who knows? And there's also no guarantee that the same phenomenon is driving the periodicity of both repeating FRBs.

“This exciting discovery highlights how little we know about the origin of FRBs," study co-author Duncan Lorimer, the associate dean for research at West Virginia University, said in a statement. "Further observations of a larger number of FRBs will be needed in order to obtain a clearer picture about these periodic sources and elucidate their origin."

The new study, which was led by Kaustubh Rajwade of the University of Manchester in England, was published online this evening (June 7; June 8 United Kingdom time) in the journal Monthly Notices of the Royal Astronomical Society. You can read a preprint of it for free at arXiv.org.

Astronomie - Mysterious deep-space flashes repeat every 157 days The find could be a big clue about the nature of fast radio bursts.
325 Views
Created with page4