If true, this would be only the second time such a neutrino has been traced back to its source 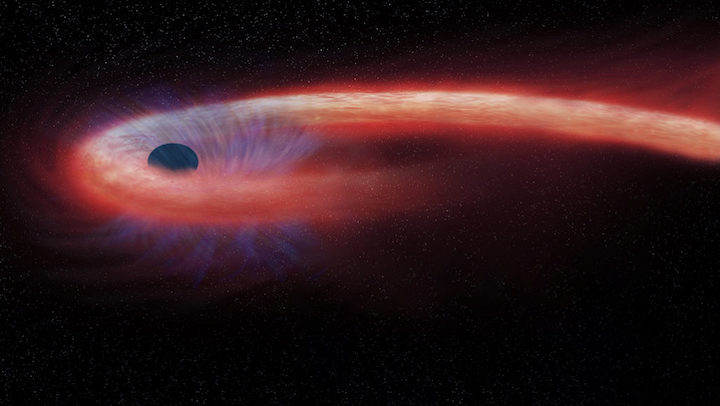 A high-energy neutrino may have been born when a star was ripped apart by a black hole (illustrated), scientists report. Gas (red) stripped from the star spirals toward the black hole. Some stellar material is swallowed up while some is flung outward (blue).

A neutrino that plowed into the Antarctic ice offers up a cautionary message: Don’t stray too close to the edge of an abyss.

The subatomic particle may have been blasted outward when a star was ripped to pieces during a close encounter with a black hole, physicists report May 11 at arXiv.org. If it holds up, the result would be the first direct evidence that such star-shredding events can accelerate subatomic particles to extreme energies. And it would mark only the second time that a high-energy neutrino has been traced back to its cosmic origins.

With no electric charge and very little mass, neutrinos are known to blast across the cosmos at high energies. But scientists have yet to fully track down how the particles get so juiced up.

One potential source of energetic neutrinos is what’s called a tidal disruption event. When a star gets too close to a supermassive black hole, gravitational forces pull the star apart (SN: 10/11/19). Some of the star’s guts spiral toward the black hole, forming a hot pancake of gas called an accretion disk before the black hole gobbles the gas up. Other bits of the doomed star are spewed outward. Scientists had predicted that such violent events might beget energetic neutrinos like the one detected.

Spotted on October 1, 2019, the little neutrino packed a punch: an energy of 200 trillion electron volts. That’s about 30 times the energy of the protons in the most powerful human-made particle accelerator, the Large Hadron Collider. The neutrino’s signature was picked up by IceCube, a detector frozen deep in the Antarctic ice. That detector senses light produced when neutrinos interact with the ice.

When IceCube finds a high-energy neutrino, astronomers scour the sky for anything unusual in the direction from which the particle came, such as a short-lived flash of light, or transient, in the sky. This time, astronomers with the Zwicky Transient Facility came up with a possible match: a tidal disruption event called AT2019dsg.

First observed in April 2019, that event had been spied emitting light of various wavelengths: visible, ultraviolet, radio and X-rays. And the maelstrom was still raging when IceCube detected the neutrino, according to a team of physicists including Marek Kowalski of the Deutsches Elektronen-Synchrotron, or DESY, in Zeuthen, Germany.

While intriguing, the association between the neutrino and the shredded star is not certain, says IceCube physicist Francis Halzen of the University of Wisconsin–Madison, who was not involved with the new study. “I don’t know if I have to bet my wallet, but I probably would,” Halzen says. “But it doesn’t have much money in it.”

The probability that a neutrino and a similar tidal disruption event would overlap by chance is only 0.2 percent, the researchers report. But that doesn’t meet physicists’ stringent burden of proof. “Just one event is difficult to convince [us] this source is really a neutrino emitter,” says astrophysicist Kohta Murase of Penn State University. “I am waiting for more data.”

Kowalski declined to comment for this article, as the paper has not yet been accepted for publication in a scientific journal.

To have birthed such an energetic neutrino, the star-shredding event must have first accelerated protons to high energies. Those protons must then have crashed into other protons or photons (particles of light). That process produces other particles, called pions, that emit neutrinos as they decay.

Now, scientists are aiming to pin down exactly how that acceleration happened. The protons might have been launched within a wind of debris that flowed outward in all directions. Or they could have been accelerated in a powerful, geyserlike jet of matter and radiation.

AT2019dsg shows some unusual features that any explanation should be able to account for. X-rays produced in the event, for example, appeared to drop off rapidly. So physicists WalterWinter of DESY and Cecilia Lunardini of Arizona State University in Tempe suggest May 13 at arXiv.org that the event did produce a jet, but that a cocoon of material gradually shrouded the region, hiding the X-rays from view while still allowing the neutrino to escape. Lunardini declined to comment because the paper is not yet published in a journal.

But Murase argues that for the jet to be hidden, that means it can’t be that powerful of an outflow, making it hard to explain the energetic neutrino this way. “If it injects a lot of energy, this energy gets out,” he says. In a third study posted May 18 at arXiv.org, Murase and colleagues favor the idea that the protons get accelerated in an outward flowing wind or in a corona, a superhot region near the black hole’s accretion disk.

Determining where these particles come from can help scientists better understand some of the most extreme environments in the cosmos. Previously, astronomers had matched up a different energetic neutrino with a blazar experiencing a flare-up (SN:7/12/18). A blazar is a bright source of light powered by a supermassive black hole at the center of a galaxy. Both a blazar flare and a tidal disruption event “are very special activities, which is when a lot of energy is released in a small amount of time,” says astrophysicist Ke Fang of Stanford University, who was not involved with the study.

Making more observations of high-energy neutrinos is crucial, Fang says. “This is the only way we can clearly understand how the universe is operating at this extreme energy.”