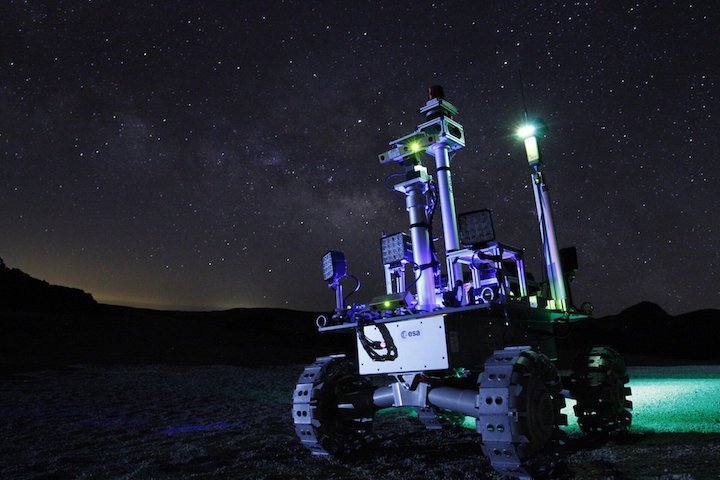 A laser light shone through the dark could power robotic exploration of the most tantalising locations in our Solar System: the permanently-shadowed craters around the Moon’s poles, believed to be rich in water ice and other valuable materials.

ESA’s Discovery & Preparation programme funded the design of a laser system to keep a rover supplied with power from up to 15 km away while it explores some of these dark craters.

At the highest lunar latitudes, the Sun stays low on the horizon all year round, casting long shadows that keep sunken craters mired in permanent shadow, potentially on a timescale of billions of years. Data from NASA’s Lunar Reconnaissance Orbiter, India’s Chandrayaan-1 and ESA’s SMART-1 orbiters show these ‘permanently shadowed regions’ are rich in hydrogen, strongly suggesting water ice can be found there.

As well as having scientific interest, this ice would be valuable to lunar colonists, as a source of drinking water, oxygen for breathing, as well as a source of hydrogen rocket fuel. But to know for certain requires going into these darkened craters and drilling.

Any rover prospecting the shadowed regions would have to do without solar power, while contending with temperatures comparable to the surface of Pluto, down to –240°C, just 30 degrees above absolute zero.

“The standard suggestion for such a situation is to fit the rover with nuclear-based radioisotope thermoelectric generators,” comments ESA robotics engineer Michel Van Winnendael. “But this presents problems of complexity, cost and thermal management – the rover could warm up so much that prospecting and analysing ice samples actually becomes impractical.

“As an alternative, this study looked at harnessing a laser-based power system, inspired by terrestrial laser experiments to keep drones powered and flying for hours on end.”

The 10-month PHILIP, ‘Powering rovers by High Intensity Laser Induction on Planets’, contract was undertaken for ESA by Italy’s Leonardo company and Romania’s National Institute of Research and Development for Optoelectronics, coming up with a complete laser-powered exploration mission design.

This included selecting a location for the mission lander, in a near-permanently sunlit region between the South Pole’s de Gerlache and Shackleton craters. This lander would host a solar-powered 500-watt infrared laser, which it would keep trained on a 250 kg rover as it entered the shadowed regions.

The rover would convert this laser light into electrical power using a modified version of a standard solar panel, with photodiodes on the sides of the panel keeping it locked onto the laser down to centimetre-scale accuracy.

The study identified routes that would take the rover downward at a relatively gentle 10 degrees of slope while keeping it in the lander’s direct line of sight. The laser beam could be used as a two-way communications link, with a modulating retro-reflector mounted on the second of the rover’s solar panels, sending signal pulses in light reflected back to the lander.

Michel adds: “With the PHILIP project completed, we are one step closer to powering rovers with lasers to explore the dark parts of the Moon. We’re at the stage where prototyping and testing could begin, undertaken by follow-up ESA technology programmes.”