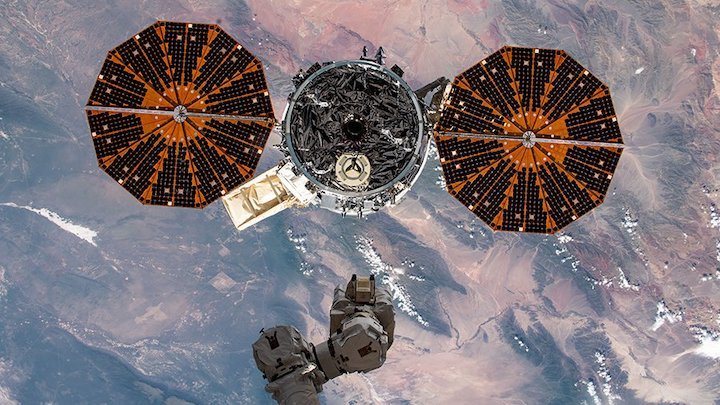 After 86 days in orbit, Northrop Grumman Corp.’s NG-13 Cygnus resupply mission to the International Space Station (ISS) entered its homestretch on Monday, 11 May, when ground controllers robotically detached the spacecraft from the Earth-facing (or “nadir”) port of the Unity node and released it into space. Launched last 15 February, the Cygnus—which is named in honor of Air Force Major Robert H. Lawrence, the first African-American selected for astronaut training—arrived at the ISS three days later and was robotically berthed at Unity nadir on 18 February. It delivered close to 8,000 pounds (3,600 kg) of experiments, payloads and supplies to the orbital outpost.

With today’s departure, Cygnus will continue in a free-flying autonomous state for the next couple of weeks, ahead of a destructive dive into the atmosphere on 29 May.

In readiness for departure, flight controllers robotically detached Cygnus from Unity’s nadir port at 8:40 a.m. EDT Monday with the 57.7-foot-long (17.6-meter) Canadarm2 robotic arm, before maneuvering it to the release position. At the ISS Flight Control Room at the Johnson Space Center (JSC) in Houston, Texas, was a team headed by Flight Director Allison Bolinger and Capcom Stephen Zenter, with Expedition 63 Commander Chris Cassidy monitoring operations from the station’s cupola. At the point of departure, the station and Cygnus were orbiting about 260 miles (420 km) over the Pacific Ocean.

Following release at 12:08 p.m. EDT, Cygnus conducted a three-minute-long “burn” of its engines to position itself outside the 650-foot (200-meter) Keep Out Sphere (KOS), an imaginary collision-avoidance zone around the sprawling orbital complex. And as it drifted further away, heading beyond the “approach ellipsoid”—a zone 0.6 miles (1 km) x 0.6 miles (1 km) x 1.2 miles (2 km) around the ISS—joint operations ended and Northrop Grumman took primary control of its spacecraft for the remainder of its mission. Scheduled to begin within the next 24 hours, NG-13’s secondary mission will get underway, which includes hosting the fourth round of Spacecraft Fire Safety Experiments (SAFFIRE-IV) to safely examine the process of combustion, smoke behavior and flame-spreading in the microgravity environment. Understanding how fire behaves in space and how different materials propagate flames in the near-total absence of terrestrial gravity is acutely necessary for the development of future spacecraft. Additionally, it will help to develop operational protocols for dealing with fire emergencies, particularly when crew members do not have the ability to exit their spacecraft or return quickly to Earth.

“SAFFIRE seeks to answer two questions,” said principal investigator David Urban of NASA’s Glenn Research Center (GRC) in Cleveland, Ohio, in an interview prior to the first mission. “Will an upward-spreading flame continue to grow or will microgravity limit the size? Secondly, what fabrics and materials will catch fire and how will they burn?”

Each SAFFIRE experiment is conducted inside a self-contained module, measuring 3 feet (0.9 meters) by 5 feet (1.5 meters), divided into an avionics bay filled with sensors, high-definition video cameras and signal processing hardware and a combustion chamber in which the samples are burned.

Managed by NASA’s Advanced Exploration Systems Division, three previous SAFFIRE missions have been conducted, with experiments ignited aboard successive Cygnus vehicles after departure from the ISS at the completion of their primary missions. In July 2016, SAFFIRE-I got underway following the unberthing of the OA-6 Cygnus vehicle. Monitored by automated cameras and sensors, a piece of Solid Inflammatory Boundary at Low Speed (SIBAL) cloth—a cotton blend on a fiberglass substrate, measuring about 3.3 feet (1 meter) long by 15 inches (40 cm) in diameter—was ignited by a hot wire in a small experiment enclosure aboard the Cygnus. At the time, SAFFIRE-I marked the largest in-space fire experiment of its type and a total of 25 gigabits of data, including 40,989 images and data files were transmitted to investigators.

It demonstrated to investigators that flames burn more slowly in a larger confined volume than in smaller spaces, even if environmental conditions such as oxygen, pressure and flow-speed are the same. “In SAFFIRE-I, we were looking at a single, large fuel sample and what we learned was the flame very rapidly reached a steady size and shape and spread-rate, ” explained Gary Ruff, program manager for SAFFIRE at NASA-Glenn, in an earlier NASA interview. “It also burned a little bit slower than we were anticipating. We also saw that it burned just as rapidly into the incoming air as it did when it was burning with the incoming air.” This proved something of a surprise, since larger samples were expected to burn up to three times faster than smaller ones. And whilst a slower-moving flame might seem preferable, it also means that smoke production can often be slower and this results in a time delay for a smoke detector to sense its presence.

Four months later, in November 2016, during the final days after the departure of the OA-5 Cygnus from the space station, SAFFIRE-II expanded the combustion science test portfolio of its predecessor with additional materials. Nine samples were burned in the experiment enclosure, including another SIBAL cotton-fiberglass blend and a sheet of Plexiglas, not dissimilar to the type of material historically utilized in spacecraft windows. Also burned was a specimen of Nomex, a commercially available, flame-retardant material used on spacecraft both as a fire barrier and in the composition of storage bags.

According to Ruff, the materials all had different flammability limits at different oxygen levels. The SAFFIRE-II ignition sequence began about 11 hours after OA-5 was released from the station’s 57.7-foot-long (17.6-meter) Canadarm2 robotic arm. “All nine samples have burned and preliminary telemetry indicate that data and images were recorded as expected,” NASA noted at the completion of the SAFFIRE-II test. And in June 2017—following the departure of the OA-7 Cygnus spacecraft—the SAFFIRE-III investigation tested the same cotton-fiberglass blend as SAFFIRE-I, but burned it at a much higher fuel-flow velocity.

Following today’s departure of the NG-13 Cygnus, it is expected that the commands to initiate SAFFIRE-IV will be sent within hours. Earlier this year, Dr. Ruff told media representatives at a “What’s On Board” NASA briefing that the experiment runs will be expanded for the final three missions of the series, SAFFIRE-IV, V and VI. They will run at lower pressures of around 8.2 psi and a 34-percent oxygen level—significantly higher atmospheric concentrations than found here on Earth—in order to increase the energetic vigor of the fires. And whilst the first three SAFFIRE experiments ran autonomously for about 2.5 hours, the final three runs will require around eight hours to complete. “Fire detection, combustion product monitoring and post-fire clean-up technologies planned for future spacecraft will also be demonstrated,” NASA noted.

Following the SAFFIRE-IV runs and the deployment of a series of small CubeSats from the spacecraft for space communications and Global Positioning System (GPS) mapping technology applications, it is anticipated that Cygnus will be deorbited on 29 May, burning up in a shower of debris in the upper atmosphere. One of the payloads that will burn up is the now-defunct High Definition Earth Viewing (HDEV) camera, which greatly surpassed a two-year life expectancy. It was launched aboard SpaceX’s CRS-3 Dragon cargo ship way back in April 2014 and reached its end-of-life last October.

Yet the departure of NG-13 from the space station marks the start of a busy summer of visiting vehicles, highlighted by the planned launch and arrival of the Demo-2 Crew Dragon with NASA astronauts Doug Hurley and Bob Behnken at the end of May. Additionally, Japan’s next H-II Transfer Vehicle (HTV-9) is tracking a launch on 20 May, Russia’s Progress MS-15 is due to arrive in late July and the NG-14 Cygnus in the second week of September. According to Northrop Grumman, the Cygnus service module for the NG-14 mission is expected to be delivered from the firm’s plant in Dulles, Va., to the Wallops Island launch site in July.