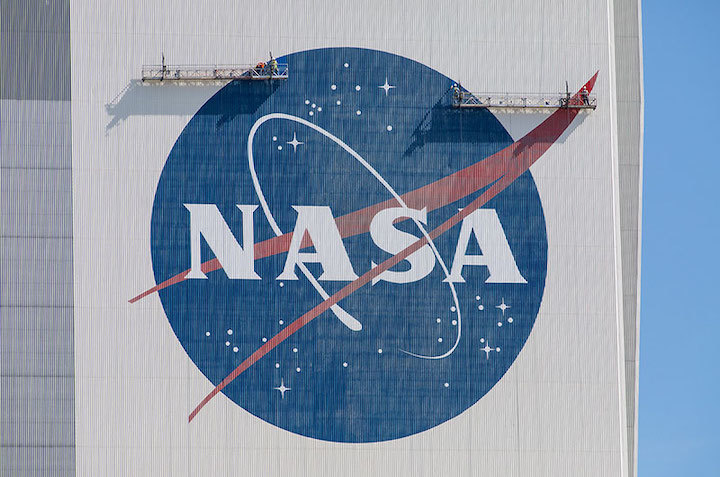 The enormous NASA logo on the 525-foot-tall Vehicle Assembly Building at NASA's Kennedy Space Center is getting a fresh coat of paint. (NASA)

NASA is refreshing its logo for a new era a human spaceflight.

The 10-story-tall insignia that adorns the side of the space agency's iconic Vehicle Assembly Building (VAB) is receiving a fresh coat of paint. The emblem's bright red vector and royal-azure blue background have faded since the Kennedy Space Center facility was last reapplied 13 years ago.

As astronaut launches are now set to resume from the Florida spaceport and with plans underway to return crews to the moon, it was time to restore the logo and its adjacent American flag to their original bold colors.

"Guess who's getting painted?!" NASA's Exploration Ground Systems division posted to its social media accounts on Friday afternoon (May 8). "The massive NASA logo on the 525-foot-tall [160-meter] Vehicle Assembly Building at NASA's Kennedy Space Center is getting a fresh coat for the new era of Artemis!"

Under the Artemis program, NASA is focusing its human space exploration efforts on landing the next man and the first woman on the moon by 2024, while U.S. commercial companies pick up where the space shuttle left off in 2011, delivering crews and cargo to and from low Earth orbit. SpaceX is scheduled to launch its first astronaut mission to the International Space Station on May 27 from Kennedy Space Center's Launch Complex 39A.

NASA contracted with HM2 and H.I.S. Painting of Titusville, Florida to bring the logo and flag back to their former glory. The companies are experienced in painting large space program facilities, having previously applied the large U.S. flag to the side of the United Launch Alliance (ULA) Atlas and Vulcan Vertical Integration Facility (VIF) at the Cape Canaveral Air Force Station's Space Launch Complex 41 and coated the mobile launcher that will be used support NASA's Space Launch System (SLS) rocket as it is transported from the VAB and on the launchpad for Artemis missions.

The VAB paint work now underway marks the fourth time that the flag and NASA logo have been revived.

The American flag was first added to the side of voluminous VAB in 1976, in celebration of the United States' first 200 years as a country. Twenty-two years later in 1998, the flag received its first new coat of paint and the NASA insignia, known as the "meatball," was added to the VAB to commemorate the space agency's 40th anniversary.

The enormous NASA emblem replaced the U.S. bicentennial logo, which had emblazoned the side of the assembly building since 1976 and, by coincidence, had been created by the same New York design firm that had developed the "worm," the NASA logotype used in place of the meatball from 1975 to 1992.

The NASA logo and U.S. flag are the largest of their type. Each of the red and white stripes on the American flag measures 9 feet wide (2.7 meters) — wide enough to fit one of the Kennedy Space Center Visitor Complex buses that are used to tour the public around the center. Each of the 50 stars spans 6 feet (1.8 meters) in diameter.