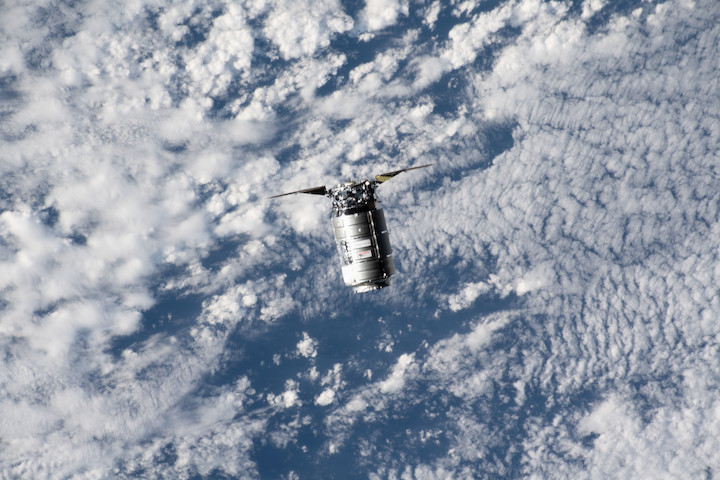 Northrop Grumman's Cygnus cargo craft approaches the International Space Station delivering about 7,500 pounds of research and supplies to the Expedition 62 crew. NASA astronaut Andrew Morgan would command the Canadarm2 robotic arm to reach out and capture Cygnus after a two-and-half-day trip that began with a launch from NASA's Wallops Flight Facility in Virginia.
Credits: NASA

Editor's Note: This advisory was updated May 7 to reflect that Cygnus’ deorbit burn is now scheduled to occur Friday, May 29, or Saturday, May 30 .

Live coverage of the spacecraft’s release will air on NASA Television and the agency’s website beginning at 11:45 a.m. EDT, with release scheduled for noon.

Flight controllers on the ground will send commands to robotically detach Cygnus from the Earth-facing port of the Unity module, maneuver it into place, and release it from the Canadarm2 robotic arm. Station commander Christopher Cassidy of NASA will monitor Cygnus’ systems as it moves away from the orbiting laboratory.

Within 24 hours of its release, Cygnus will begin its secondary mission, hosting the Spacecraft Fire Safety Experiment – IV (Saffire-IV), which provides an environment to safely study fire in microgravity. It also will deploy a series of payloads. Northrop Grumman flight controllers in Dulles, Virginia, will initiate Cygnus’ deorbit to burn up in Earth’s atmosphere Friday, May 29, or Saturday, May 30.

Cygnus cargo ship leaves space station for free-flying fire mission
It will fall back to Earth on May 29, NASA says. 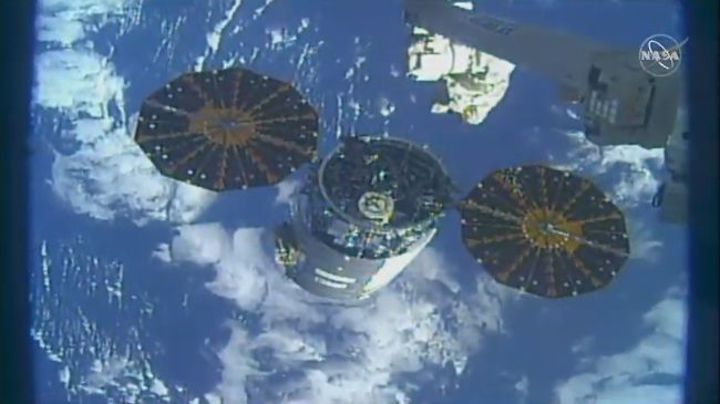 A robotic Cygnus cargo ship cast off from the International Space Station on Monday (May 11) to begin a brief, new life as a fire lab in orbit.

The Cygnus NG-13 spacecraft, which delivered tons of supplies to the station in February, was released by the space station's robotic arm at 12:09 p.m. EDT (1609 GMT) as both spacecraft sailed 260 miles (418 kilometers) above the Pacific Ocean. After 83 days at the station, the cargo ship will now spend several weeks on its own deploying tiny satellites and conducting a fire experiment that scientists hope will lead to safer spacecraft for astronauts.

The Northrop Grumman-built Cygnus NG-13 launched to the space station Feb. 15 on an Antares rocket and arrived three days later, delivering 7,500 lbs. (3,400 kilograms) of science gear, crew supplies and spacewalking tools in the process. It is now filled with 4,500 lbs. (2,041 kg) of trash and unneeded items (along with the fire experiment and cubesats).

Among NG-13's trash haul are the remains of NASA's High-Definition Earth Viewing Experiment. The experimental camera launched to the station in 2014 and provided stunning live HD views of the station and Earth until mid-2019, when it failed for good.

NASA officials have said the Cygnus NG-13 spacecraft will eventually fall back to Earth on May 29, destroying itself in a fiery plunge through Earth's atmosphere over the Pacific Ocean.

Northrop Grumman named the ship the S.S. Robert H. Lawrence after the late Maj. Robert H. Lawrence, Jr., the first African American ever selected to be an astronaut. Lawrence was selected by the Air Force in 1967 as an astronaut for the Manned Orbiting Laboratory, a planned military space station. Sadly, Lawrence died in a training accident shortly after his selection.

Cygnus vehicles are disposable resupply craft designed to haul supplies to the station under multibillion-dollar contracts between Northrop Grumman and NASA. Two other companies, SpaceX and Sierra Nevada Corp., also have separate resupply contracts with NASA.

As its name suggests, NG-13 is the 13th Cygnus cargo ship to visit the station for NASA. One Cygnus vehicle was lost in a 2014 launch accident.

Before Cygnus NG-13 falls to Earth this month, the spacecraft must first deploy two small cubesats that NASA officials have said "will research ways to improve space communication techniques and GPS mapping systems," according to Spaceflight Now. The Cygnus will fly to a higher orbit than that of the space station and release the cubesats with a "Slingshot" deployer on the ship's exterior.

Meanwhile, NASA scientists will activate the Spacecraft Fire Safety IV experiment (or Saffire-IV) to better understand how fire behaves in space.  The experiment will test fire-detection systems and study how fire in space spreads at a pressure equivalent to sea level on Earth, as well as at a lower pressure with a higher oxygen concentration, according to a NASA description.

"Understanding how fire behaves in microgravity, and how different materials propagate flames in space is immensely important for the development of future crew spacecraft," NASA officials wrote in a Saffire description. "It also will help inform operational protocols for dealing with fire emergencies, particularly when astronauts do not have the ability to exit a spacecraft or quickly return to Earth."