Chasing these interlopers down might require a novel approach. 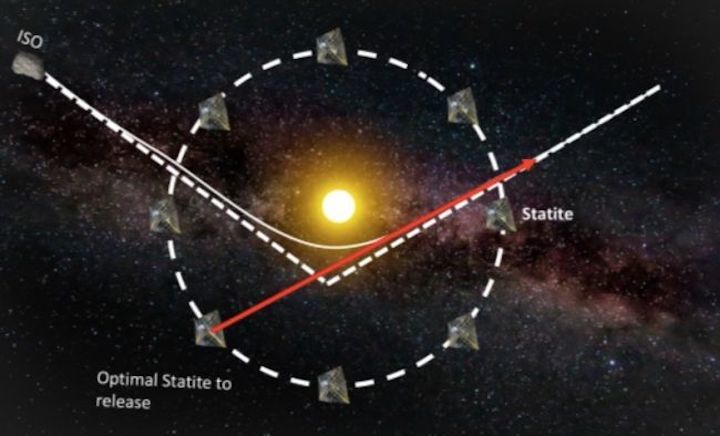 A fleet of solar-sailing sentries stationed far from the sun could someday allow scientists to get up-close looks at interstellar visitors like the mysterious 'Oumuamua.

The NASA Innovative Advanced Concepts (NIAC) Program has funded a team of researchers to study the feasibility of building and deploying "statites" (short for "static satellites") at various points along the outer reaches of our solar system.

These lightsail-equipped spacecraft would use solar radiation pressure — the push from photons streaming from the sun — to "hover" in the same spot over time, keeping an eye out for interstellar objects (ISOs) zooming through their particular patch of space.

"Once an ISO is detected, the system can deliver a cubesat on either a flyby trajectory or on a rendezvous trajectory (with propulsion)," the research team, led by Richard Linares, an assistant professor in the Department of Aeronautics and Astronautics at the Massachusetts Institute of Technology (MIT), wrote in a description of the project. (A cubesat on the propulsion-free flyby option would rely solely on the sun's gravitational pull to direct it toward the ISO.)

This novel strategy might be the best way to get up-close looks at ISOs, team members said.

"There are a lot of fundamental challenges with observing ISOs from Earth — they are usually so small that light from the sun needs to illuminate it in a certain way for our telescopes to even detect it," Linares said in a statement.

"And they are traveling so fast that it’s hard to pull together and launch a mission from Earth in the small window of opportunity we have before it’s gone," he added. "We'd have to get there fast, and current propulsion technologies are a limiting factor."

Astronomers have spotted two confirmed ISOs to date. The first was 'Oumuamua, which zoomed through the inner solar system in the fall of 2017 and remains a bit of a puzzle to this day. The object's strange combination of characteristics — its weirdly elongated shape and curious nongravitational acceleration, for example — inspired some speculation that it might be an alien spacecraft of some sort.

The second, Comet Borisov, was first observed in August 2019. Borisov is less mysterious than 'Oumuamua, more obviously resembling the comets of our own solar system.

And scientists are sure to find more interlopers in the future, especially after the Vera C. Rubin Observatory gets up and running in Chile in the next year or so. Vera C. Rubin will survey large patches of sky repeatedly and in great detail, catching many "transients" such as ISOs, researchers have said.

"Studying an interstellar body close-up would revolutionize our understanding of planet formation and evolution," Weiss, a professor of planetary sciences at MIT, said in the same statement.

"For the first time, we could obtain sensitive measurements of the bulk composition of other solar systems," Weiss added. "We could also learn how quickly and how commonly objects transit between solar systems, which will tell us the feasibility of the interstellar transfer of life."

A statite launch is not imminent, however; Linares and his team received a NIAC Phase 1 award, which funds nine months of initial feasibility studies and idea development. The researchers could potentially advance their concept further via Phase 2 and Phase 3 NIAC funding, should they apply for and receive it.