Bepi in the sky with stars: photo contest winners announced 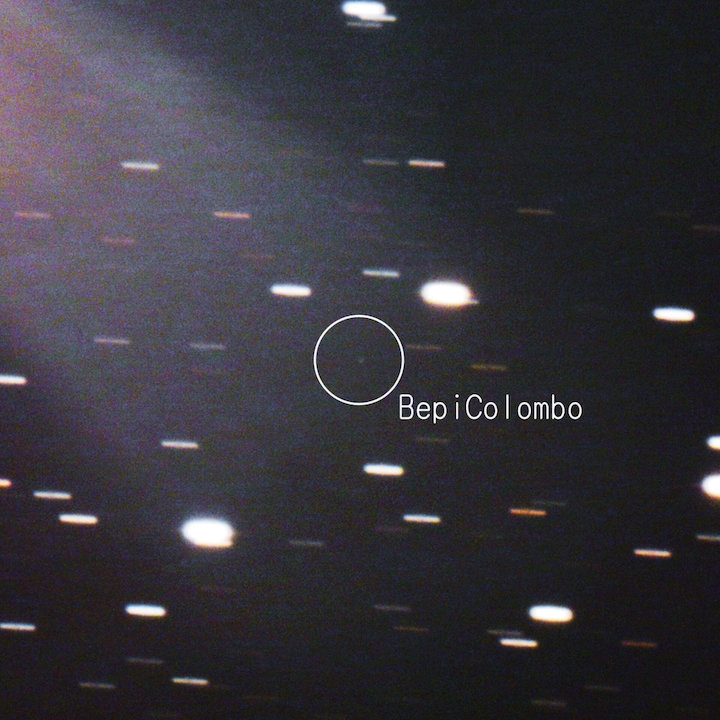 In early April, as the European-Japanese BepiColombo spacecraft was approaching our home planet ahead of the first flyby in its seven-year journey to Mercury, mission scientists invited amateur astronomers to observe the event from Earth and share their photos of this unique event.

Over thirty observers from around the world participated in the campaign. The jury, composed of BepiColombo mission experts, was very positively impressed by all entries, both on aesthetical grounds and because of the good quality of the astronomical observations, and wishes to thank all participants who observed the Mercury explorer as it crossed our sky and immortalized it in their beautiful images and sequences.

The authors of the three best images of the flyby – the best glimpse, the best track and the last glimpse – selected by the jury will receive a scale model of BepiColombo.

The winning images are:

BepiColombo reached its closest approach to Earth at 04:24:57 UTC on 10 April, flying only 12 689 km above our planet’s surface. The manoeuvre – the first of nine planetary flyby and the only one of Earth – tightened the spacecraft’s orbit towards the inner Solar System, where it is scheduled to meet Venus on 15 October for the first of two flybys of this planet on the way to Mercury. 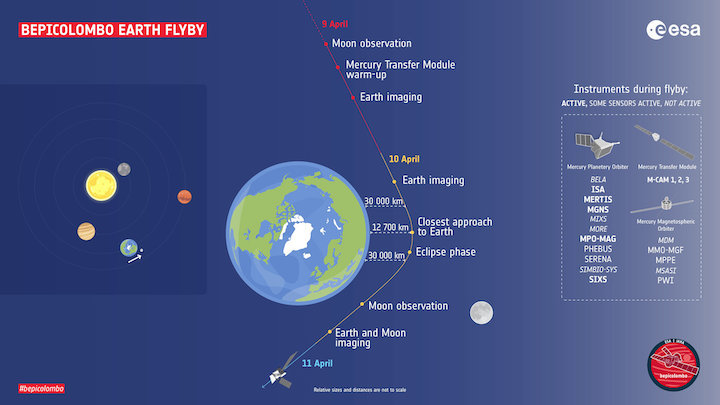 Science instruments aboard the European-Japanese Mercury explorer BepiColombo are in excellent condition to gather high-quality data during the spacecraft’s long cruise to the innermost planet of the Solar System despite not having been designed for this purpose, teams collaborating on the mission learned during the spacecraft’s April flyby of Earth.

The orbit-tightening manoeuvre, which saw BepiColombo come as close as 12 689 km to our planet’s surface at 04:25 UTC on 10 April 2020, provided an opportunity to test six of the eleven instruments aboard ESA’s Mercury Planetary Orbiter (MPO). Seven sensors of three instruments on the Mercury Magnetospheric Orbiter MIO of the Japanese Aerospace Agency (JAXA) were also on, as well as the three ‘selfie’ cameras mounted on the Mercury Transfer Module (MTM), which carries the two scientific orbiters to their destination.

“It was great to see that all of the instruments that we operated were functioning extremely well and provided good results,” says ESA’s BepiColombo project scientist Johannes Benkhoff. “We haven’t had such a good opportunity to test them all in space before. It was fantastic to see that not only there weren’t any problems, but that the data were of good quality despite the instruments being designed specifically for Mercury.”

For example, the Mercury Radiometer and Thermal Infrared Spectrometer (MERTIS), a novel instrument for studying the surface composition of celestial objects, managed to take measurements of the Moon during the Earth flyby. The surface of the Moon is, however, much colder, than the surface of Mercury, which made the observations especially challenging.

“We were looking at something that at its hottest may have about 100°C, while we made MERTIS to study Mercury, which can have over 400°C,” says Jörn Helbert, of the German Aerospace Centre (DLR), a co-principal investigator of MERTIS. “Also, we will be looking at Mercury from the distance of less than 1000 km, while the Moon was 700 000 km away during the flyby.”

On top of that, MERTIS looked at the Moon through its secondary port and not the main port, which is currently covered by the MTM. Still, the instrument captured a unique set of data.

“No one has observer the Moon in this spectral range before from space,” says Jörn. ”It’s the first data set of its kind and it’s at least as good as we hoped for.”

The results are encouraging for the upcoming two flybys of Venus, a planet that has not been visited by a European spacecraft since the end of the Venus Express mission in 2014, and is currently orbited only by a Japanese mission called Akatsuki.

“Now that we know what this innovative instrument is capable of, we can focus on getting as much out of it as possible during the two flybys of Venus,” says Johannes. “The same goes for the other instruments. It enables us to maximise the scientific potential of the entire mission in ways we didn’t necessarily foresee when we were designing it.”

BepiColombo will pass by Venus for the first time on 15 October at the distance of about 10 630 km. The spacecraft’s second flyby of the planet, in August 2021, will take it as close as about 550 km from Venus’ surface, closer than the orbit of Akatsuki.

“There are instruments, including MERTIS and the PHEBUS ultraviolet spectroscope, that can take measurements at Venus that we couldn’t do with any previous mission,” says Jörn. “We will be able to get a lot of data about the dense atmosphere of Venus that will be in a way similar to those we could get from the Soviet Venera 15 and 16 missions in the 1980s. That will provide a unique comparison.”

The 'sound' of the magnetic field It is not only Venus that promises unforeseen scientific opportunities to the BepiColombo team. Just like MERTIS, the MPO Magnetic Field Investigation instrument (MPO-MAG) was designed specifically for Mercury. MPO-MAG's speciality is measuring weak magnetic fields, such as that of the smallest rocky planet of the Solar System. The instrument was, however, still able to obtain useful data during the Earth flyby, which helped to calibrate it for future measurements.

“If you put our magnetometer on the surface of Earth, you couldn’t measure anything because the magnetic field is too strong,” says Daniel Heyner of the Technical University of Braunschweig, Germany, Principal Investigator for MPO-MAG. “It turned out that the closest approach during the flyby was far enough from Earth that we still could make good measurements.”

The MAG-MPO data revealed that the solar wind – a constant flow of electrically charged particles streaming from the Sun into interplanetary space – was very quiet on the day of the flyby. It also showed the moment when BepiColombo encountered the so-called bow shock, a sharp boundary that forms at the outer edge of the Earth’s magnetic environment as it interacts with the solar wind. The data then reflected how the probe flew through the magnetosheath, a turbulent region still considerably affected by the interplanetary plasma, and crossed the magnetopause, the boundary after which the magnetic field of Earth dominates.

The team also got valuable insights into the interference from other instruments and especially from the MTM. Once at Mercury, the MPO will separate from the MTM, but being able to filter out the propulsion module’s noise during the seven-year cruise opens new opportunities for previously unplanned scientific investigations.

Working in tandem with Solar Orbiter “This is a very interesting time for investigations of the solar wind,” says Daniel. “We now have several recently launched spacecraft travelling in the direction of the Sun that have some similar instruments. There is ESA’s Solar Orbiter and NASA’s Parker Solar Probe. They are in the heliosphere at different distances from the Sun and that enables us, for example, to track coronal mass ejections and study how their speed and intensity changes as they propagate from the Sun.”

The MAG-MPO  team now plans, despite the original focus on Mercury, to keep measuring the solar wind for most of the seven-year journey.

Johannes expects that working in tandem especially with ESA’s own Solar Orbiter will enable large synergies and a new approach to the study of the environment around the Sun.

“With the BepiColombo Earth flyby we were able to prove that our instruments perform well even during the cruise phase,” he says. “Now we know that we can do some real and innovative science that takes advantage of the network of spacecraft that we currently have in the inner Solar System.”