NASA's Hubble Space Telescope teamed up with the Magellan Consortium's Magellan II Telescope in Chile to analyze the atmosphere of this planet, which orbits a star that is hotter and brighter than our Sun, and is located at a distance of 780 light-years from Earth in the constellation Eridanus. Among exoplanets, planets that encircle stars beyond our Sun, WASP-79b is among the largest ever observed. 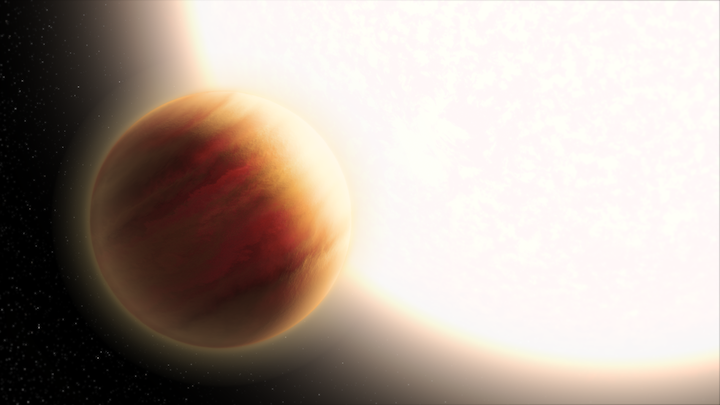 This is an artist's illustration of the super-hot exoplanet WASP-79b, located 780 light-years away. The planet orbits precariously close to a star that is much hotter than our Sun. The planet is larger than Jupiter, and its very deep, hazy atmosphere sizzles at 3,000 degrees Fahrenheit — the temperature of molten glass. The Hubble Space Telescope and other observatories measured how starlight is filtered through the planet's atmosphere, allowing for its chemical composition to be analyzed. Hubble has detected the presence of water vapor.
Credits: NASA, ESA and L. Hustak (STScI)

The surprise in recently published results is that the planet's sky doesn't have any evidence for an atmospheric phenomenon called Rayleigh scattering, where certain colors of light are dispersed by very fine dust particles in the upper atmosphere. Rayleigh scattering is what makes Earth's skies blue by scattering the shorter (bluer) wavelengths of sunlight.

Because WASP-79b doesn't seem to have this phenomenon, the daytime sky would likely be yellowish, researchers say.

"This is a strong indication of an unknown atmospheric process that we're just not accounting for in our physical models. I've shown the WASP-79b spectrum to a number of colleagues, and their consensus is 'that's weird,'" said Kristin Showalter Sotzen of the Johns Hopkins University Applied Physics Laboratory in Laurel, Maryland.

The team would like to find other planets with a similar condition to learn more.

"Because this is the first time we've see this, we're really not sure what the cause is," Sotzen said. "We need to keep an eye out for other planets like this because it could be indicative of unknown atmospheric processes that we don't currently understand. Because we only have one planet as an example, we don't know if it's an atmospheric phenomenon linked to the evolution of the planet."

Hot Jupiters orbit so close to their stars that the conventional wisdom is that they migrated inward toward a tight orbit about their star, after bulking up on cold gas in the frigid outer reaches of a planetary system. WASP-79b completes an orbit in just 3 1/2 days. But this planet is in an unusual polar orbit about the star, which goes against scientists' theories about how planets form — especially for hot Jupiters.

WASP-79b is twice the mass of Jupiter and is so hot it has an extended atmosphere, which is ideal for studying starlight that is filtered through and grazes the atmosphere on its way toward Earth.

To study the planet, the team used a spectrograph — an instrument that analyzes wavelengths of light in order to look at chemical compositions — on the Magellan II Telescope at Las Campanas Observatory in Chile. They expected to see a decrease in the amount of blue starlight due to Rayleigh scattering. Instead, they saw the opposite trend. The shorter, bluer wavelengths of light appear to be more transparent, indicating less absorption and scattering by the atmosphere. This result was consistent among independent observations of WASP-79b made with NASA's Transiting Exoplanet Survey Satellite (TESS).

WASP-79b also was observed as part of the Hubble Space Telescope's Panchromatic Comparative Exoplanet Treasury (PanCET) program, and those observations showed that there is water vapor in WASP-79b's atmosphere. Based on this finding, the giant planet was selected as an Early Release Science target for NASA's upcoming James Webb Space Telescope. Webb is expected to provide much more spectral data over longer infrared wavelengths. These observations may reveal more evidence for water vapor in the planet's atmosphere, and will provide a detailed view of the planet's chemical makeup, which could help reveal the underlying source of the peculiar spectrum.

The results were published in January 2020 in The Astronomical Journal.

The Hubble Space Telescope is a project of international cooperation between NASA and ESA (European Space Agency). NASA's Goddard Space Flight Center in Greenbelt, Maryland, manages the telescope. The Space Telescope Science Institute (STScI) in Baltimore conducts Hubble science operations. STScI is operated for NASA by the Association of Universities for Research in Astronomy in Washington, D.C.