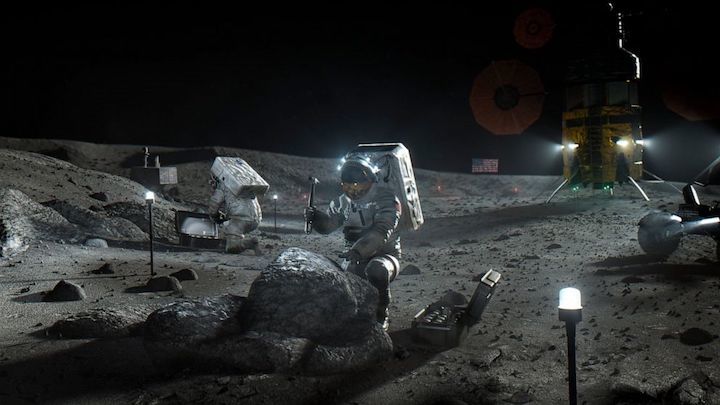 This illustration made available by NASA in April 2020 depicts Artemis astronauts on the Moon. On Thursday, April 30, 2020, NASA announced the three companies that will develop, build and fly lunar landers, with the goal of returning astronauts to the moon by 2024. The companies are SpaceX, led by Elon Musk; Blue Origin, founded by Amazon’s Jeff Bezos; and Dynetics, a Huntsville, Ala., subsidiary of Leidos.

CAPE CANAVERAL, Fla. -- NASA is turning to private industry for the first lunar landers for astronauts in a half-century, with three competing, quite contrasting versions.

NASA Administrator Jim Bridenstine announced Thursday the three companies that will develop, build and fly lunar landers, with the goal of returning astronauts to the moon in 2024 and ultimately on to Mars.

The companies are SpaceX in Hawthorne, California, led by Elon Musk; Blue Origin in Kent, Washington, founded by Amazon’s Jeff Bezos; and Dynetics, a Huntsville, Alabama, subsidiary of Leidos. Altogether, the contracts for the initial 10-month period total $967 million.

“This is the last piece that we need in order to get to the moon” by 2024, Bridenstine said.

He noted it will be the first lunar lander since the last Apollo moon mission in 1972.

Over the next 10 months, each company will refine its concept and NASA will decide which lander to test first. Bridenstine said NASA will go with the company that has the highest probability of success by 2024.

NASA will rely on its own Orion capsules and Space Launch System megarockets — still under development — to launch astronauts to the moon.

The two other companies, Boeing and Vivace, put in bids but were eliminated early on, leaving the three awarded contracts. Blue Origin got more than half the total amount— $579 million — more than four times more than SpaceX's $135 million. Dynetics was in between, with $253 million.

SpaceX’s proposed Starship lander is so tall that astronauts will use an elevator to get to and from the lunar surface. Blue Origin’s version comes with a big ladder, according to artistic renderings. The Dynetics lander is so low to the ground that only a few steps are needed, like a front porch, a feature that NASA gave high marks for safety and efficiency.

SpaceX is using its own Starship spacecraft — still under development in Texas — and its own rockets. Blue Origin and Dynetics are partnering with numerous subcontractors, including commercial launch companies.

Going commercial, Bridenstine said, will drive down costs while increasing access. It builds off of NASA’s commercial cargo and crew programs for the International Space Station. Just last November, SpaceX and Blue Origin were among the companies that won contracts to make cargo deliveries to the moon.

NASA wants the new Artemis moon-landing program to be sustainable, unlike Apollo, with multiple missions and multiple locations on the lunar surface. While only one company will carry the first woman and next man to the lunar surface, all three will participate over the long haul, officials noted.

By learning how to live and work on another world — the moon — NASA will be better equipped to eventually send astronauts to Mars, Bridenstine said.

In a teleconference with reporters, Musk embraced this "potential for an incredibly exciting future in space with a base on the moon and ultimately sending people and having a self-sustaining city on Mars.”

Dynetics’ vice president of space systems, Kim Doering said her team is excited not just about 2024 but the long-term lunar economy.

And Blue Origin chief executive Bob Smith was among those calling it a historic day. “Going to the moon is the reason why we got into this business,” he said.

NASA on Thursday announced the three companies selected to design and build human landing systems as part of the agency's Artemis program, a critical step toward the goal of putting boots back on the lunar surface by 2024.

After design reviews and testing, one will eventually be selected to put the first NASA crew – a man and a woman – on the moon.

• Blue Origin of Kent, Washington, is developing the Integrated Lander Vehicle, a three-stage lander capable of launching on its New Glenn rocket and United Launch Alliance's Vulcan Centaur rocket. The company will receive $579 million of the contract.

"I know I speak for many on our team when I say going to the moon is why we got into this business," Blue CEO Bob Smith said after the announcement. "We're all very fortunate to be standing on the shoulders of Apollo."

• Dynetics of Huntsville, Alabama, is working on the Dynetics Human Landing System, or DHLS, which is a single-structure spacecraft that provides ascent and descent capabilities for the crew. It's being designed to launch on ULA's Vulcan rocket. Dynetics was awarded $253 million.

Kim Doering, a vice president at Dynetics, said her company is "excited about enabling a long-term commercial lunar economy."

• SpaceX of Hawthorne, California, will use Starship, its next-generation launch vehicle. Starship is a fully integrated spacecraft that will fly on the company's Super Heavy booster. Starship prototypes are already underway in Texas and the company flew a short "hop" last year. SpaceX was awarded $135 million.

SpaceX and Tesla CEO Elon Musk also joined a post-announcement call with reporters, saying he was grateful for the faith NASA was putting in the Starship architecture.

"I think we've got the potential for an incredibly exciting future in space with a base on the moon," Musk said. "And ultimately sending people and sending a self-sustaining city on Mars."

The three companies and their partners are expected to refine and test their lander concepts through the base period, which ends in February 2021. NASA said it intends to purchase service on one or more of the systems after that timeframe.

To get the hardware in lunar orbit, all three of the companies proposed using launch systems other than what NASA is building – the Space Launch System rocket and Orion capsule. Administrator Jim Bridenstine said thanks to improved rendezvous and docking, landing hardware could be flown to the moon on any rocket before NASA crews arrive on Orion. Then the two astronauts could transfer to the lander.

"This is the last piece that we need in order to get to the moon," Bridenstine said. "This is historic, and the United States of America has not had a human lander system since 1972."

But one much-discussed element of future human missions, a space station called "Gateway" in lunar orbit that would serve as a transition point, was briefly mentioned during the conference. Bridenstine said it likely won't be necessary for the first 2024 landing, but the agency still plans on building one for the goal of long-term settlement in 2028 and beyond.

Bridenstine also addressed the coronavirus pandemic, adding that his "little agency is still moving forward in a meaningful way."