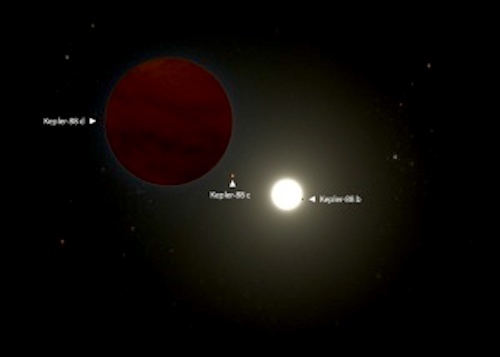 Maunakea, Hawaii – Our solar system has a king. The planet Jupiter, named for the most powerful god in the Greek pantheon, has bossed around the other planets through its gravitational influence. With twice the mass of Saturn, and 300 times that of Earth, Jupiter’s slightest movement is felt by all the other planets. Jupiter is thought to be responsible for the small size of Mars, the presence of the asteroid belt, and a cascade of comets that delivered water to young Earth.

Do other planetary systems have gravitational gods like Jupiter?

A team of astronomers led by the University of Hawaiʻi Institute for Astronomy (UH IfA) has discovered a planet three times the mass of Jupiter in a distant planetary system.

The discovery is based on six years of data taken at W. M. Keck Observatory on Maunakea in Hawaiʻi. Using the High-Resolution Echelle Spectrometer (HIRES) instrument on the 10-meter Keck I telescope, the team confirmed that the planet, named Kepler-88 d, orbits its star every four years, and its orbit is not circular, but elliptical. At three times the mass of Jupiter, Kepler-88 d is the most massive planet in this system.

The system, Kepler-88, was already famous among astronomers for two planets that orbit much closer to the star, Kepler-88 b and c (planets are typically named alphabetically in the order of their discovery).

Those two planets have a bizarre and striking dynamic called mean motion resonance. The sub-Neptune sized planet b orbits the star in just 11 days, which is almost exactly half the 22-day orbital period of planet c, a Jupiter-mass planet. The clockwork-like nature of their orbits is energetically efficient, like a parent pushing a child on a swing. Every two laps planet b makes around the star, it gets pumped. The outer planet, Kepler-88 c, is twenty times more massive than planet b, and so its force results in dramatic changes in the orbital timing of the inner planet.

Kepler-88 d has three times the mass of Kepler-88 c, making the newly found planet the most massive one known in this system. ANIMATION CREDIT: W. M. KECK OBSERVATORY/ADAM MAKARENKO

The newly discovered planet adds another dimension to astronomers’ understanding of the system.

“At three times the mass of Jupiter, Kepler-88 d has likely been even more influential in the history of the Kepler-88 system than the so-called King, Kepler-88 c, which is only one Jupiter mass,” says Dr. Lauren Weiss, Beatrice Watson Parrent Postdoctoral Fellow at UH IfA and lead author on the discovery team. “So maybe Kepler-88 d is the new supreme monarch of this planetary empire – the empress.”

Perhaps these extrasolar sovereign leaders have had as much influence as Jupiter did for our solar system. Such planets might have promoted the development of rocky planets and directed water-bearing comets toward them. Dr. Weiss and colleagues are searching for similar royal planets in other planetary systems with small planets.

Their paper announcing the discovery of Kepler-88 d is published in today’s issue of The Astronomical Journal and also available in preprint format on ArXiv.org.

The High-Resolution Echelle Spectrometer (HIRES) produces spectra of single objects at very high spectral resolution, yet covering a wide wavelength range. It does this by separating the light into many “stripes” of spectra stacked across a mosaic of three large CCD detectors. HIRES is famous for finding exoplanets. Astronomers also use HIRES to study important astrophysical phenomena like distant galaxies and quasars, and find cosmological clues about the structure of the early universe, just after the Big Bang.

The W. M. Keck Observatory telescopes are among the most scientifically productive on Earth. The two, 10-meter optical/infrared telescopes on the summit of Maunakea on the Island of Hawaii feature a suite of advanced instruments including imagers, multi-object spectrographs, high-resolution spectrographs, integral-field spectrometers, and world-leading laser guide star adaptive optics systems.