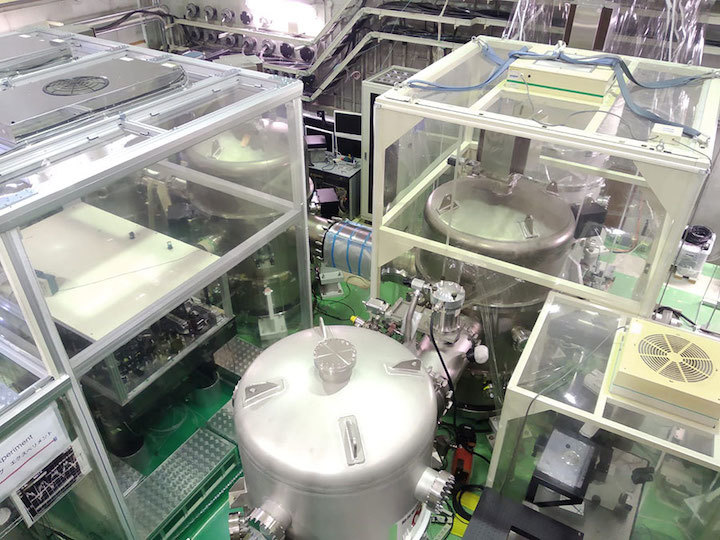 Figure: Vacuum chambers in the infrastructure of the former TAMA300 detector used in this experiment. (Credit: NAOJ)

Researchers at the National Astronomical Observatory of Japan (NAOJ) have used the infrastructure of the former TAMA300 gravitational wave detector in Mitaka, Tokyo to demonstrate a new technique to reduce quantum noise in detectors. This new technique will help increase the sensitivity of the detectors comprising a collaborative worldwide gravitational wave network, allowing them to observe fainter waves.

When it began observations in 2000, TAMA300 was one of the world’s first large-scale interferometric gravitational wave detectors. At that time TAMA300 had the highest sensitivity in the world, setting an upper limit on the strength of gravitational wave signals; but the first detection of actual gravitational waves was made 15 years later in 2015 by LIGO. Since then detector technology has improved to the point that modern detectors are observing several signals per month. The scientific results obtained from these observations are already impressive and many more are expected in the next decades. TAMA300 is no longer participating in observations, but is still active, acting as a testbed for new technologies to improve other detectors.

The sensitivity of current and future gravitational wave detectors is limited at almost all the frequencies by quantum noise caused by the effects of vacuum fluctuations of the electromagnetic fields. But even this inherent quantum noise can be sidestepped. It is possible to manipulate the vacuum fluctuations to redistribute the quantum uncertainties, deceasing one type of noise at the expense of increasing a different, less obstructive type of noise. This technique, known as vacuum squeezing, has already been implemented in gravitational wave detectors, greatly increasing their sensitivity to higher frequency gravitational waves. But the optomechanical interaction between the electromagnetic field and the mirrors of the detector cause the effects of vacuum squeezing to change depending on the frequency. So at low frequencies vacuum squeezing increases the wrong type of noise, actually degrading sensitivity.

To overcome this limitation and achieve reduced noise at all frequencies, a team at NAOJ composed of members of the in-house Gravitational Wave Science Project and the KAGRA collaboration (but also including researchers of the Virgo and GEO collaborations) has recently demonstrated the feasibility of a technique known as frequency dependent vacuum squeezing, at the frequencies useful for gravitational wave detectors. Because the detector itself interacts with the electromagnetic fields differently depending on the frequency, the team used the infrastructure of the former TAMA300 detector to create a field which itself varies depending on frequency. A normal (frequency independent) squeezed vacuum field is reflected off an optical cavity 300-m long, such that a frequency dependence is imprinted and it is able counteract the optomechanical effect of the interferometer.

This technique will allow improved sensitivity at both high and low frequencies simultaneously. This is a crucial result demonstrating a key-technology to improve the sensitivity of future detectors. Its implementation, planned as a near term upgrade together with other improvements, is expected to double the observation range of second-generation detectors.

These results will appear as Zhao, Y., et al. “Frequency-dependent squeezed vacuum source for broadband quantum noise reduction in advanced gravitational-wave detectors” in Physical Review Letters on April 28, 2020. A similar result has been obtained by a group in MIT using a 16-m filter cavity, and the two papers will be published jointly.