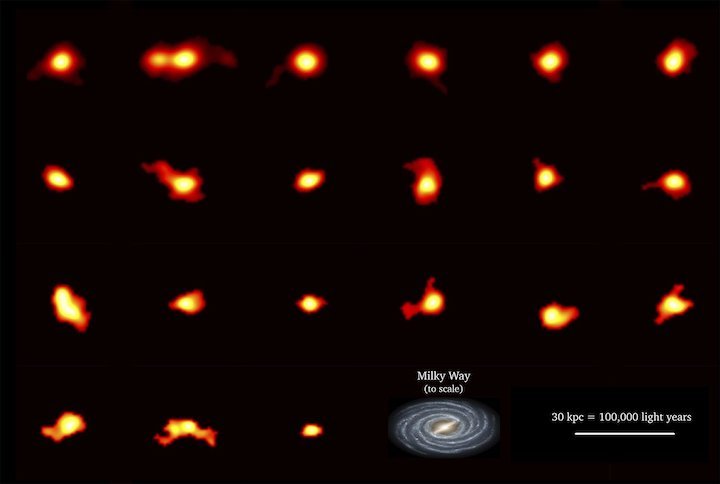 A collage of 21 galaxies imaged by the ALPINE survey. The images are based on light emitted by singly ionized carbon, or C+. These data show the variety of different galaxy structures already in place less than 1.5 billion years after the Big Bang (our universe is 13.8 billion years old). Some of the images actually contain merging galaxies; for example, the object in the top row, second from left, is actually three galaxies that are merging. Other galaxies appear to be more smoothly ordered and may be spirals; a clear example is in the second row, first galaxy from the left. Our Milky Way galaxy is shown to scale to help visualize the small sizes of these infant galaxies.

New results from an ambitious sky survey program, called ALPINE, reveal that rotating disk-shaped galaxies may have existed in large numbers earlier in the universe than previously thought.

The ALPINE program, formally named "ALMA Large Program to Investigate C+ at Early Times," uses data obtained from 70 hours of sky observations with the ALMA observatory (Atacama Large Millimeter/submillimeter Array) in Chile, in combination with data from previous observations by a host of other telescopes, including the W. M. Keck Observatory in Hawaii and NASA's Hubble and Spitzer space telescopes. Specifically, the survey looked at a patch of sky containing dozens of remote galaxies.

"This is the first multi-wavelength study from ultraviolet to radio waves of distant galaxies that existed between 1 billion and 1.5 billion years after the Big Bang," says Andreas Faisst, a staff scientist at IPAC, an astronomy center at Caltech, and a principal investigator of the ALPINE program, which includes scientists across the globe.

One of ALPINE's key functions is using ALMA to observe the signature of an ion known as C+, which is a positively charged form of carbon. When ultraviolet light from newborn stars hits clouds of dust, it creates the C+ atoms. By measuring the signature of this atom, or "emission line," in galaxies, astronomers can see how the galaxies are rotating; as the gas containing C+ in the galaxies spins toward us, its light signature shifts to bluer wavelengths, and as it spins away, the light shifts to redder wavelengths. This is similar to a police car's siren increasing in pitch as it races toward you and decreasing as it moves away.

The ALPINE team made the C+ measurements on 118 remote galaxies to create a catalog of not only their rotation speeds but also other features such as gas density and the number of stars that are formed.

The survey revealed rotating mangled galaxies that were in the process of merging, in addition to seemingly perfectly smooth spiral-shaped galaxies. About 15 percent of the galaxies observed had a smooth, ordered rotation that is expected for spiral galaxies. However, the authors note, the galaxies may not be spirals but rotating disks with clumps of material. Future observations with the next generation of space-based telescopes will pinpoint the detailed structure of these galaxies.

"We are finding nicely ordered rotating galaxies at this very early and quite turbulent stage of our universe," says Faisst. "That means they must have formed by a smooth process of gathering gas and haven't collided with other galaxies yet, as many of the other galaxies have."

By combining the ALMA data with measurements from other telescopes, including the now-retired Spitzer, which specifically helped measure the masses of the galaxies, the scientists are better able to study how these young galaxies evolve over time.

"How do galaxies grow so much so fast? What are the internal processes that let them grow so quickly? These are questions that ALPINE is helping us answer," says Faisst. "And with the upcoming launch of NASA's James Webb Space Telescope, we will be able to follow-up on these galaxies to learn even more."

The study, led by Faisst, titled, "The ALPINE-ALMA [CII] Survey: Multi-Wavelength Ancillary Data and Basic Physical Measurements," was funded by NASA and the European Southern Observatory.

A brief overview of the survey, produced by a team led by Olivier LeFèvre of the Laboratoire d'Astrophysique de Marseille (LAM), is at https://ui.adsabs.harvard.edu/abs/2019arXiv191009517L/abstract; the ALMA data is detailed in another paper by a team led by Matthieu Béthermin of LAM, available at https://ui.adsabs.harvard.edu/abs/2020arXiv200200962B/abstract.

ALMA is a partnership of ESO (representing its Member States), NSF (USA) and NINS (Japan), together with NRC (Canada), MOST and ASIAA (Taiwan), and KASI (South Korea), in cooperation with the Republic of Chile. The Joint ALMA Observatory is operated by ESO, AUI/NRAO and NAOJ. More information about ALMA is at