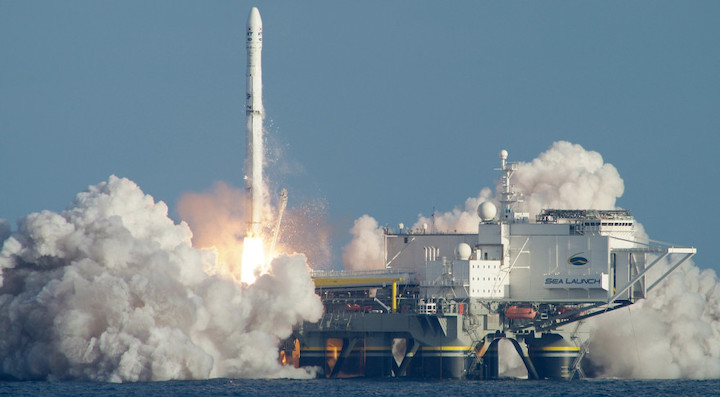 WASHINGTON — The two vessels that serve as a floating launch platform and command ship for Sea Launch are now in a Russian port, but the company’s owner says no launches are planned for the foreseeable future.

In an interview in the Russian publication Kommersant April 23, Vladislav Filev, chairman of the board of S7 Group, the Russian airline which owns Sea Launch, said that while the command ship and launch platform had now arrived in port near Vladivostok, the project was on hold.

Filev said in the interview that there currently was no opportunity to do anything with the vessels, “so we have frozen the program until better times.” Filev didn’t give a more specific estimate on when company operations could resume.

The two vessels had been based in the Port of Long Beach, California, since Sea Launch started operations in the late 1990s. They were used for launches of the Zenit-3SL rocket, most recently in May 2014.

In 2016, S7 Group announced an agreement to purchase Sea Launch from RSC Energia, who had become the primary owner during a reorganization after it filed for Chapter 11 bankruptcy protection in 2009. Filev said S7 Group paid about $150 million for Sea Launch, and envisioned conducting 70 launches over 15 years with the system.

The sale of Sea Launch to S7 Group closed in April 2018, but only in recent months had the company taken steps to move the ships from Long Beach to Russia. In February, the launch platform, Odyssey, was loaded onto a cargo ship that transported it to Russia, while the command ship sailed on its own.

In the interview, Filev appeared to regret moving the ships to Russia. He said he had been told that the costs of basing the ships in Russia would be no higher than what they had been in California. Instead, he said the cost was “twice as worse” in Russia.

Filev provided no update about what launch vehicle Sea Launch might consider using when, or if, the venture does attempt to resume launches. He declined to answer a question in the interview on the issue.

Sea Launch’s original launch vehicle, the Zenit-3SL, uses lower stages built in Ukraine, making its use on a Russian system unlikely. One option has been the Soyuz-5, a vehicle under development designed to use infrastructure originally built for the Zenit. However, officials with GK Launch Services, the Russian company that will market the vehicle, said last year the vehicle is not likely to enter service until the middle of the decade.