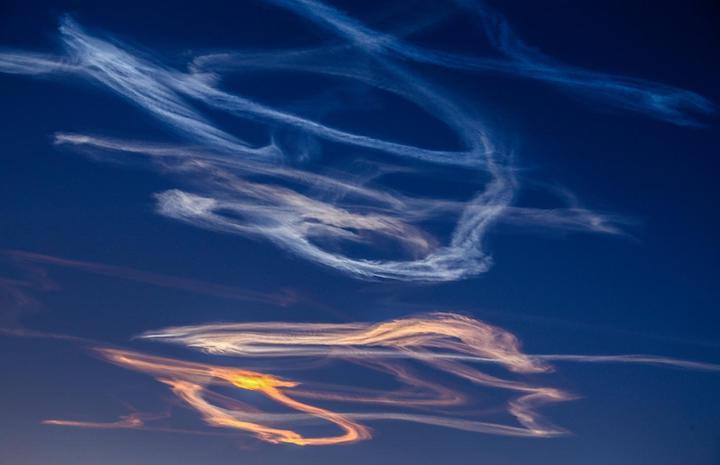 April 22, 2020, Mountain View, CA – The Dishchii’bikoh meteorite fall in the White Mountain Apache reservation in central Arizona has given scientists a big clue to finding out where so-called LL chondrites call home. They report their results in the April 14 issue of Meteoritics and Planetary Science.

“LL chondrites are fairly common meteorites with low-oxidized and low metallic (LL) iron content,” said Peter Jenniskens, the lead author and meteor astronomer with the SETI Institute and NASA Ames Research Center. “We want to know where they originated because the damaging Chelyabinsk airburst of February 15, 2013 in Russia, was caused by a particularly large 20-meter sized LL chondrite.”

LL chondrites originate from somewhere in the asteroid belt between Mars and Jupiter, where a parent body broke up and created a family of asteroids long ago. Occasional collisions with those family members eject rocks into orbit around the Sun. When these small asteroids collide with Earth’s atmosphere, they cause a bright meteor from which pieces survive sometimes and fall on the ground as meteorites.

“Prior to this fall, only three other LL chondrite falls had ever been photographed,” said Jenniskens. “Those asteroids had arrived on relatively short 2-year orbits around the Sun, taking slightly longer than it takes Mars to orbit the Sun, but shorter than most main belt asteroids.”

The Dishchii’bikoh fall was observed over much of Arizona around 3:56 AM on June 2, 2016. The bright meteor was filmed by the LO-CAMS low-light video camera network led by astronomer Nicholas Moskovitz of Lowell Observatory in Flagstaff. “This was particularly exciting because it was the first meteorite fall we captured with our cameras,” says Moskovitz.

As the asteroid plunged through the atmosphere, it was spinning more than two times per second and a large fragment broke off at 44 km altitude. Further down, the meteor flared at altitudes of 34, 29, and 25 km and left a spectacular dust train in the sky that was photographed, illuminated by the rising Sun.

Because they fell closer to the ground, the meteorites reflected Doppler weather radar signals as if there was a brief hail storm, telling scientists where to search. A team of six researchers and meteorite hunters led by co-authors Laurence Garvie and former graduate students Prajkta Mane and Daniel Dunlap of Arizona State University received permission from tribal elders to do so. They recovered 23 meteorites under the radar footprint in the weeks after the fall.

“The meteorite was classified LL type,” says Garvie. “Of shock stage 7. Only one other LL7 fall has ever been recovered.”

Analysis of the meteorites showed that Dishchii’bikoh, unlike Chelyabinsk, was a harmless size of 80 centimeters in diameter (32 inches), based on rare isotopes left in the meteorite from exposure to cosmic rays in space. “This is still among the bigger falls we have investigated so far,” says cosmochemist Kees Welten of UC Berkeley.

A research team led by Qing-zhu Yin of UC Davis investigated whether Dishchii’bikoh could have formed on the same parent body as Chelyabinsk. “Oxygen and chromium isotopes confirm a similarity in material type,” says team member Matthew Sanborn of UC Davis.

The team found that both meteorites represented rock that was heated in impacts that happened about 100 million years after the formation of the solar system, suggesting they originated from the same parent body.

That parent body is now broken, forming one or more of the many asteroid families between Mars and Jupiter. Studies of noble gases at ETH Zürich in Switzerland showed that Dishchii’bikoh was ejected following one of many ongoing collisions with these asteroids that happened 11 million years ago.

“That collision is much older than the 1.2 million years of Chelyabinsk,” report cosmochemists Matthias Meier and Henner Busemann of ETH Zürich, “but much younger than the 36 million years of the LL chondrite that recently fell near Stubenberg in Germany.”

The small asteroids from this collision moved into orbits that became perturbed by a resonance on the inside of the asteroid belt, making their orbits more elongated, so they ultimately impacted Earth.

“All four LL chondrites we have studied so far arrived at Earth on short orbits,” says Jenniskens. “This is telling. The short orbits point to the inner asteroid belt as the source region.”

In that region is a large and widespread asteroid family called “Flora” that appears from telescopic observations to have a composition similar to LL chondrites.

“Dishchii’bikoh’s orbit became super short and steeply inclined from numerous close encounters with Earth,” says Jenniskens. “Such encounters are particularly frequent if the asteroid early on moved nearly in the plane of the planets.”

All told, these new data help show that LL chondrite meteorites like Dishchii’bikoh and the more dangerous Chelyabinsk impactor came from the edge of the asteroid belt closest to Earth, from a region in the belt near the plane of the planets.

The work was supported by NASA's Solar System Observation and Emerging World Programs and by the NASA Ames Asteroid Threat Assessment Program.