A blazar is a particular type of active galactic nucleus (AGN) with a central supermassive black hole which emits a jet, a flux of highly energetic particles and radiation moving almost at the velocity of light, and which is aligned along the observer's line-of-sight. An international team of researchers has observed the birth of one of these objects for the first time by combining observations from several telescopes, among them the William Herschel Telescope (WHT).

As a point of reference, scientists believe all large galaxies have centrally located massive black holes, but only about one per cent of these have active nuclei. For example, our Milky Way's massive black hole is dormant. The emission from an AGN can often exceed that of the host galaxy, and originates from the central black hole accreting circumnuclear gas. But not all this gas is accreted onto the black hole; some gets accelerated and spewed out in the form of narrow, bi-polar jets.

"Active galaxies which have jets are usually big, old elliptical galaxies which, according to the models, are formed by the merger of two or more smaller galaxies, so that we think that these mergers are the cause of the activation of the jets" says Rubén García-Benito, a researcher at the Instituto de Astrofísica de Andalucía (IAA-CSIC), who has participated in the discovery. "A galactic collision is a very efficient way to make large masses of gas fall to the centre of a galaxy, which feeds the supermassive black hole and can produce the emergence of the jet".

Each merging galaxy shows a supermassive black hole at its centre. The more massive of the two shows a very young jet, with an estimated age less than 15,000 years, whose existence can be attributed to the interacton between the galaxies, which started at least 500 million years ago.

"We are seeing the jet face-on" explains Enrique Pérez Jiménez, a researcher at the IAA-CSIC and a co-author of the study, "so that we have found the precursor of a blazar. As an analogy we could say that if a blazar is an adult, a γ-NLSy1 is a child". 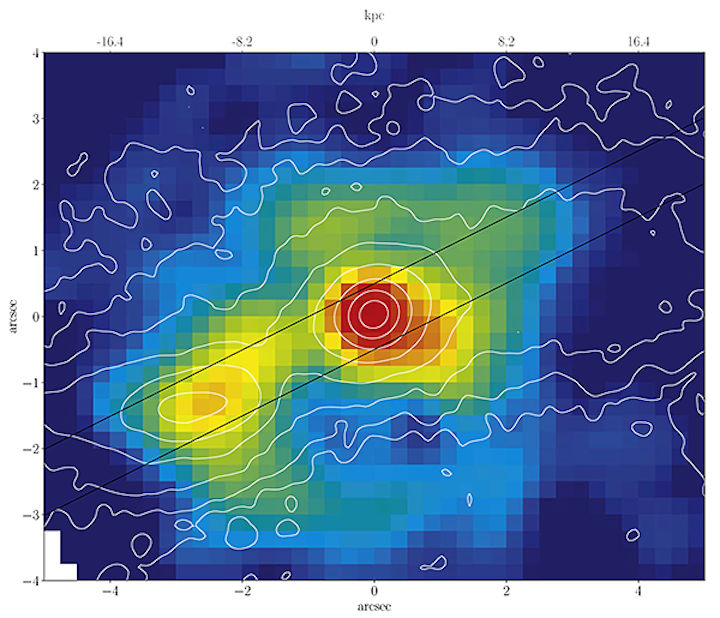 The galaxy TXS 2116-077 (seen on the right) collides with another spiral-shaped galaxy of similar mass, creating a relativistic jet in TXS 2116-077's centre. Both galaxies have AGNs. Shown here is an image of the emission in the H-alpha line with superposed isophotes of the infrared emission in the J band. Also shown in black lines is the region where a spectrum was obtained with ISIS on the WHT and OSIRIS on the Gran Telescopio Canarias (GTC). Figure extracted from Paliya et al., 2020, ApJ, 892, 133.

Jets are the most powerful astrophysical phenomena in the universe. They can emit more energy into the universe in one second than our sun will produce in its entire lifetime. That energy is in the form of radiation, such as intense radio waves, X-rays, and gamma-rays.

In general blazars are so bright that they occult the galaxies which host them, so that studying their environment is difficult. However the detected jet in this young galaxy is less energetic, which has permitted the study of the gas and the stars of the host galaxy, providing very valuable information to trace the origin of the jet.

The team obtained the image and the spectra using several of the largest ground-based telescopes in the world, such as the GTC and the WHT on La Palma, as well as the optical/infrared Subaru telescope on Hawaii, and NASA's Chandra X-ray satellite observatory. The WHT ISIS observations were obtained as part of a service programme.