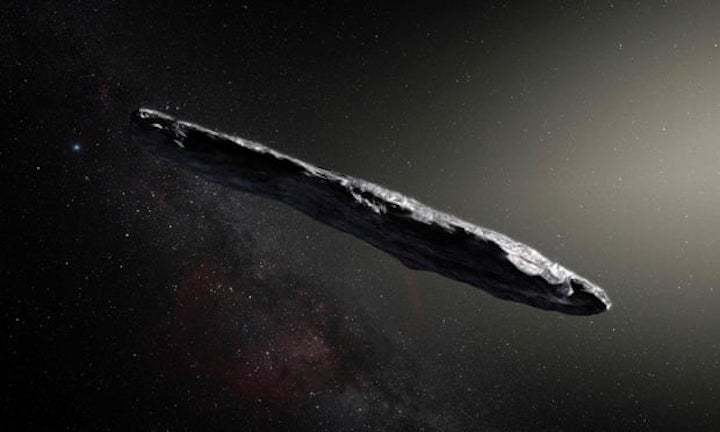 The cigar-shaped interstellar visitor to our solar system known as ‘Oumuamua could be the remnants of a larger body that was torn apart by its host star, according to researchers.

The dark, reddish object that hurtled into our solar system in 2017 and was named after the Hawaiian word for messenger or scout has long puzzled scientists.

Among its peculiarities is the lack of an envelope of gas and dust that comets typically give off as they heat up. Further work by experts suggested the body was accelerated by the loss of water vapour and other gases – as seen with comets but not asteroids. The upshot was that ‘Oumuamua was labelled a “comet in disguise”.

Now scientists say they have shed light on the mystery and addressed the myriad pieces of the ‘Oumuamua puzzle.

They say ‘Oumuamua is an “active asteroid” formed from a body that was torn apart by its parent star and then ejected into interstellar space.

“Most planetary bodies … consist of numerous pieces of rock that have coalesced under the influence of gravity. You could imagine them as sandcastles floating in space,” said Dr Yun Zhang, a co-author of the new study from the Observatoire de la Côte d’Azur in France.

These bodies experience a number of forces as they pass their star.

“A tidal encounter between a planet or small body and a star is a tug-of-war game between the gravitational pull of the star and the self-gravity of the flyby body,” said Zhang, noting that when the body passes too close to the star and enters the tidal disruption region, it can stretch and be torn apart giving rise to fragments.

Writing in the journal Nature Astronomy, Zhang and Prof Doug Lin of the University of California’s Lick Observatory, report how they used computer models to reveal that such a process could have produced ‘Oumuamua and explain features including its tumbling motion, colour and unusual shape.

Zhang said near and far parts of ‘Oumuamua’s parent body would have been pulled apart from each other in the tidal disruption region, resulting in the formation of elongated fragments, such as ‘Oumuamua, which would be glued together by surface material that melted near the star and froze as it flew on.

Zhang said most of the volatile substances on ‘Oumuamua’s surface would have been lost from heating by the star around which it formed, but some residual water ice could have been preserved below its surface and subsequently heated by our, hotter, sun – explaining its unusual acceleration. “We may call ‘Oumuamua an active asteroid,” said Zhang.

The team say ‘Oumuamua could have formed from either a comet or a planet several times the size of Earth, but the former better explains ‘Oumuamua’s apparent subsurface water ice. The star around which ‘Oumuamua formed, they add, would probably have been similar to our sun but smaller and denser – or possibly a white dwarf.

Zhang says the findings not only scotch again the much-publicised notion that ‘Oumuamua is an alien spacecraft, but offer an efficient way in which asteroidal interstellar objects, previously thought to be rare, can be formed.

What’s more, she says, with objects such as ‘Oumuamua passing through “habitable zones”, such as our own solar system, they may even carry seeds of life.

Dr Alan Jackson, of Arizona State University, who was not involved in the study but has previously carried out research into ‘Oumuamua, welcomed the work.

“The idea of ‘Oumuamua being a fragment of a larger body that was tidally disrupted by passing close to its parent star was suggested by Matija Ćuk in 2018,” he said. “But this is the first work that I have seen that really explores that idea in detail and shows that it might explain how ‘Oumuamua was produced and a lot of its unusual features.”