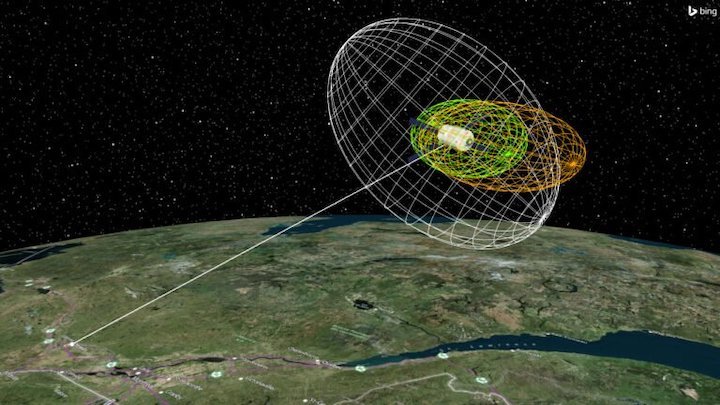 WASHINGTON: New draft FCC rules designed to prevent satellite collisions and creation of dangerous space debris have sparked strong backlash from a number of commercial firms — in contrast to past advocacy by some within DoD for even more cautious operational practices.

Industry sources say that top execs from a number of companies are already planning to take their concerns to the National Space Council, and to senior officials at the Commerce Department in hopes of garnering political backing for their concerns.

Among the new requirements, issued in a 119-page report issued by the FCC late Thursday, satellite operators must elaborate in licensing applications on how they intend to ensure that DoD’s 18th Space Control Squadron can track their spacecraft. The 18th Space Control Squadron, located at Vandenberg AFB, operates the US military’s Space Surveillance Network (SSN) that detects and tracks adversary satellites, as well as other space objects.

The FCC licenses US commercial communications satellites and the use of radio-frequency spectrum. The new set of draft rules follow an initial announcement of its plans to revamp its debris mitigation requirements in November 2018 that annoyed other agencies involved at the time in crafting government-wide guidelines on space junk under President Donald Trump’s Space Policy Directive-3. That interagency group, led by NASA, wrapped up its work on the new Orbital Debris Mitigation Standard Practices (ODMSP) in December with the approval of its recommendations by the National Space Council. The ODMSP recommendations apply to all space operators — including the Pentagon, NASA and the National Oceanic and Atmospheric Administration (NOAA) that regulates Earth observation satellites.

The proposed FCC rules, which go beyond the approved ODMSP, stop short of mandating that satellites carry an active system for identification and tracking, such as those required by commercial ships at sea. Many space experts, including at DoD and within other government agencies, have argued that such systems — either radio-frequency transponders or light reflectors — are needed in order for SSN to monitor the thousands of small satellites being launched into mega-constellations in Low Earth Orbit (LEO, below 2,000 kilometers in altitude.)

The FCC draft regulations do include a raft of reporting requirements about a satellite’s planned orbital position and operations, including planned future maneuvers. These reporting requirements, the FCC says, are aimed at helping both it and the 18th Space Control Squadron determine how likely any new satellites are to crash into a neighbor.

To encourage companies to cooperate, the FCC makes it clear the licensing process will lean favorably toward those who share as much information as possible with DoD and other satellite operators to help avoid on-orbit collisions and the creation of space junk: “We will consider favorably in an application the use of radio frequency transponder tags or other unique telemetry markers that can support the identification of objects once in orbit. Overall, we want to emphasize the importance of operators planning for satellite identification in advance so that they are able to troubleshoot potential issues, particularly for multi-satellite deployments.”

Why are they taking this tack? The use by mega-constellation operators, such as SpaceX, of specialized launch equipment that spits many small satellites into orbit at the same time has been bedeviling DoD space trackers, as it is easy to lose sight of them. In addition, SpaceX’s lack of a standard identification system for its Starlink satellites has caused concerns — although SpaceX has been working with Vandenberg to resolve the issue.

In addition, the FCC rules mandate that satellites operating above the orbit of the International Space Station (ISS, 400 kilometers in altitude) would need to be kitted out with propulsion units or otherwise be able to maneuver out of the way of a possible collision.

Some industry sources worried in formal comments on the proposed rules that the maneuverability requirement could reduce the utility of tiny and low-cost Cubesats, which are increasingly popular. It also raises questions about whether US operators might be hurt in the marketplace if foreign governments do not issue similar requirements.

“It’s interesting to note that the FCC is looking to a maneuverability requirement above 400km altitude. This is a significant step and will have many implications for future domestic operators. The question is how many international operators and other nations will follow that concept,” Josef Koller of Aerospace Corporation’s Center for Space Policy and Strategy, told me.

However, not all space operators are worried. Indeed, many space scientists and debris experts welcome the new rules.

“Overall, the FCC has adopted a very forward-leaning — dare I say progressive? — stance on orbital debris mitigation that incorporates a lot of the suggestions from new space industry and outside groups. They go above and beyond the minimums outlined in the recently-updated US Orbital Debris Mitigation Standard Practices, and beyond what I’ve seen publicly from most other countries,” Brian Weeden, head of program planning for Secure World Foundation, told me in an email.

And some would like to see even stronger legal requirements for operators to reduce the likelihood of on-orbit collisions, particularly for LEO operations.

For example, some experts bemoaned the continued failure of the federal government — including the new FCC rules — to shorten the deadline for firms to de-orbit satellites in LEO from 25 years, given the fact that many satellites now being launched in those orbits to populate mega-constellations have working lifetimes of less than five years.

Jim Cooper, senior systems engineer at Analytical Graphics Inc. (AGI) that provides operators with space safety data and analysis, told me yesterday that “there is a clear and compelling case” for cutting back the 25-year rule made simply by looking at the sheer volume of satellites in lined up for launch in the future, particularly in LEO. “Common sense dictates that this situation must be managed better,” he said, and “that the 25-year rule cannot stay.”

The ODMSP did not lower the 25-year deadline, despite fierce interagency debate on the issue. That year-long argument, as I reported extensively, involved disparate DoD factions arguing for and against a change, and prompted space operators at a number of space agencies to spar with NASA over its decision to uphold the status quo.

Thus, it was no doubt difficult for the FCC — which technically is an independent agency that does not need to take White House direction — to stray very far beyond the White House approved guidelines. (It is notable that while the industry-friendly Commerce Department made official comments on the proposed FCC rules, neither DoD nor NASA did.)

“While the FCC does not reduce the so-called ’25-year rule’ for how long satellites are to remain on-orbit, they believe the maneuverability requirement will essentially mean satellites are brought down below 400 km as soon as they reach end of life,” Weeden noted.

One the other hand, the FCC provisions break new ground by requiring companies to put money on the line for insurance against their satellites damaging other spacecraft. Indeed, some industry sources charge that the commission does not have legal standing to address the question of space operator liability.

These include a requirement that licensees indemnify the USG against costs associated with claims brought under international law for on-orbit liability and damages. The FCC leaves it up to the company to figure out how the indemnification would be implemented, explained Weeden, “but it would likely be in the form of purchasing additional insurance.”

In addition, the FCC has announced it might propose new rules — although this is not yet decided — a provision that would require firms operating satellites in Geosynchronous Orbit (GEO, some 36,000 kilometers in altitude) to put up a bond against their safe disposal. The funds would be returned once the company proved it had moved its dead satellite(s) to what is called a “graveyard” orbit above GEO.

This is likely to discourage licensing satellites in the US, which would mean the FCC rules would be less effective in generating the data the US looks to get. “The bond requirement is a great way to ensure that no one licenses in the US, and the indemnification requirement is vague” one industry source said.

Finally, industry worries that the FCC’s imposition of myriad rules that will require case-by-case review within licensing applications will slow the process dramatically. Several sources told me that there are some 44 instances in the rules package where the FCC would need to make case-by-case determinations about what any given operator must do to get a license approval.

Industry has until the expected April 23 vote by the FCC Board of Commissioners to lobby against the new rules. The separate bond provision remains open for comment prior to a formal FCC decision to actually propose a regulation sometime in the future.

Raumfahrt - FCC Risks Political Fire With Draft Space Junk Rules "The bond requirement is a great way to ensure that no one licenses in the US, and the indemnification requirement is vague" one indus
478 Views
Created with page4