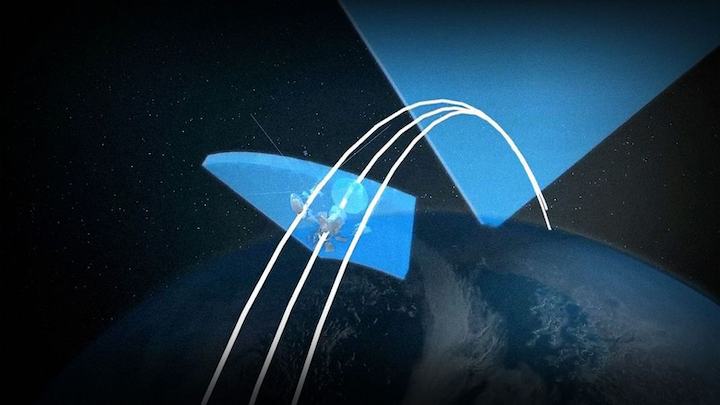 PETERSON AIR FORCE BASE, Colo.— The Space Fence radar as seen from space. This new space surveillance radar, located at 20th Space Control Squadron Detachment 4 on Kwajalein Atoll in the Marshall Islands, detects targets as small as 4-inches in diameter and expands the amount of space debris Space Command can track. The radar is recently operational. (Courtesy graphic 20th SPCS)

The 20th Space Control Squadron Detachment 4 at Redstone Arsenal, Alabama manages a fence. But not just any fence. A Space Fence. I know what you’re thinking…is it actually a giant fence in space? Kind of…yes, and kind of no. It’s a radar. On the ground. And now it’s operational.

The Space Fence is made up of a ground-based sensor that broadcasts constant bands of energy (like fence posts) 24 hours a day, 7 days a week, in an east to west surveillance direction about 1,900 miles out; this is called the Field of Regard. Any object that passes through those “posts”— debris, satellites, even the International Space Station— is automatically tracked. This is an improvement from other radars where an object’s location needs to be known in order to track it.

The Space Fence operations center is at Redstone Arsenal, but the radar itself is located at 20th SPCS Operating Location Alpha on Kwajalein Atoll in the Marshall Islands. It’s equatorial location, as well as the high wave frequency the radar will operate at, aids in detecting and tracking nanosatellites and debris measuring less than 10 centimeters. This is due in part to the Gallium Nitride (GaN) powered S-band radars in use by the Space Fence. GaN transistors can operate at higher temperatures, frequencies and voltages, making them high-efficiency amplifiers for the radar.

The radar isn’t just for tracking items. It monitors movement from low-Earth orbit (altitude of 400 to 1,200 miles) to geosynchronous orbit (altitude of 22,236 miles that allows satellites to match Earth’s orbit) as well as the spacing of objects. Cast-off pieces of satellites or rockets, collisions between objects and general deterioration, increases the amount of space debris as well as the risk of future collisions, which then creates even more debris that needs to be tracked. More debris, more problems.

What does this mean? The U.S. military considers space a warfighting domain, just like land, sea and air. So the most current, and even predictive, information we can gather to identify, characterize and understand factors that can impact space operations makes our nation and its allies better prepared to act against potential threats. Those threats can impact lives, especially those exploring space in person.

“You’ve seen the pictures of what looks like a million dots of all the satellites and debris out there, traveling at speeds that are almost impossible to imagine,” said U.S. Air Force Col. Nick Hague, NASA astronaut. “To witness firsthand, crawling inch-by-inch along the outside of the ISS, where debris have dented or even blown holes through protective panels. The mission that Team Pete is doing in terms of creating awareness of what’s up there keeps us alive and makes it possible to explore space.”

So, 21st Space Wing team: keep up the hard work, because whether you know it or not you are the reason we can discover space. As the old saying goes, “Swing for the Space Fence because if you miss you’ll still land among the satellites.”  Or something like that…

To find out more about the 21st SW mission and your place in it, follow the 21st SW Facebook page.

Raumfahrt - Swinging for the Space Fence
515 Views
Created with page4