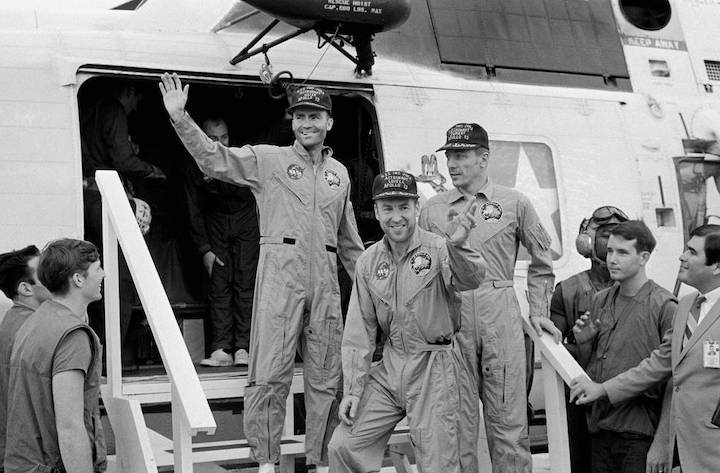 S70-35614 (17 April 1970) --- The crewmembers of the Apollo 13 mission, step aboard the USS Iwo Jima, prime recovery ship for the mission, following splashdown and recovery operations in the South Pacific Ocean. Exiting the helicopter which made the pick-up some four miles from the Iwo Jima are (from left) astronauts Fred W. Haise Jr., lunar module pilot; James A. Lovell Jr., commander; and John L. Swigert Jr., command module pilot. The crippled Apollo 13 spacecraft splashed down at 12:07:44 p.m. (CST), April 17, 1970.
Credits: NASA

As NASA marks the 50th anniversary of the Apollo 13 mission – which has become known as “a successful failure” that saw the safe return of its crew in spite of a catastrophic explosion – the agency is sharing a variety of resources, recognizing the triumph of the mission control team and the astronauts, and looking at how those lessons learned can be applied to its lunar Artemis program.

“Our goal 50 years ago was to save our valiant crew after sending them around the Moon and return them safely to Earth,” said NASA Administrator Jim Bridenstine. “Our goal now is to return to the Moon to stay, in a sustainable way. We are working hard to ensure that we don’t need to respond to this kind of emergency in Artemis, but to be ready to respond to any problems we don’t anticipate.”

While en route to the Moon on April 13, an oxygen tank in the Apollo service module ruptured. The lunar landing and moonwalks, which would have been executed by Lovell and Haise, were aborted as a dedicated team of flight controllers and engineering experts in the Apollo Mission Control Center devoted their efforts to developing a plan to shelter the crew in the lunar module as a “lifeboat” and retain sufficient resources to bring the spacecraft and its crew back home safely. Splashdown occurred in the Pacific Ocean at 1:07 p.m. April 17, after a flight that lasted five days, 22 hours and 54 minutes. 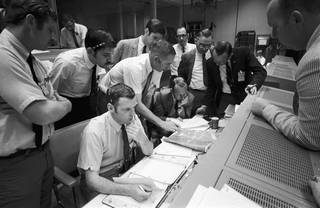 A group of flight controllers gathers around the console of Glenn S. Lunney (seated, nearest camera), Shift 4 flight director, in the Mission Operations Control Room (MOCR) of Mission Control Center (MCC), located in Building 30 at the Manned Spacecraft Center (MSC). Their attention is drawn to a weather map of the proposed landing site in the South Pacific Ocean. Among those looking on is Dr. Christopher C. Kraft, deputy director, MSC, standing in black suit, on right. When this photograph was taken, the Apollo 13 lunar landing mission had been canceled, and the problem-plagued Apollo 13 crew members were in trans-Earth trajectory attempting to bring their crippled spacecraft back home.
Credits: NASA

Due to the ongoing COVID-19 pandemic, no NASA in-person activities are planned or sponsored to mark the Apollo 13 anniversary. However, a wealth of new content and programming, historic documents, still and video imagery are available online, including previously unreleased conversations between the crew of Apollo 13 and the recently restored Apollo Mission Control Center in Houston. This dialogue includes the now-famous exchange between Lovell and mission control during which Lovell utters the phrase, “Hey Houston, we've had a problem here.”

Among the resources NASA is making available are:

NASA TV is commemorating the anniversary with multiple videos and interviews, anchored by an original special program, “Apollo 13: Home Safe,” premiering at 8 p.m. EDT Friday, April 10, on NASA Television and all of the agency’s streaming and social media platforms. The 30-minute program features an interview with Lovell, a conversation with Haise and Flight Directors Gene Kranz and Glenn Lunney, and engineer Hank Rotter, in the restored Apollo mission control room mixed with archival footage from the mission. In addition, NASA TV will air replays of historic mission footage and “pop-up” mission factoids at the exact times the events happened 50 years ago.

Social media followers are invited to ask questions about Apollo 13 using the hashtag #AskNASA. Experts will provide answers to as many questions as possible on social media and some will be answered in NASA TV’s upcoming #AskNASA episode about the mission.

Starting Thursday, April 9, the NASA Headquarters Photo Team will share historical images from the photo archives using the @NASAHQPhoto Twitter account, leading up to the splashdown anniversary on Friday, April 17.

On Friday, April 10, the @NASA Instagram account will feature part one of an “Apollo 13 by the Numbers” story, a visual recap of the mission as told by the NASA History Office. Part two will follow on Saturday, April 11. On Monday, April 13, the NASA Tumblr page will tell the story about the mission using compelling images and multimedia.

This video, from the Scientific Visualization Studio at NASA’s Goddard Space Flight Center in Greenbelt, Maryland, uses data gathered from NASA’s Lunar Reconnaissance Orbiter spacecraft to recreate some of the stunning views of the Moon the Apollo 13 astronauts saw on their perilous journey around the farside of the Moon. These visualizations, in 4K resolution, depict many different views of the lunar surface, starting with earthset and sunrise and concluding with the time Apollo 13 reestablished radio contact with mission control.

Leading up to the anniversary of Apollo 13, the biggest and brightest Moon of the year – known as a supermoon – will illuminate the night sky on Tuesday, April 7. NASA scientists will be available virtually for live or taped interviews – including via Skype or FaceTime – from 6 a.m. to 1 p.m. EDT to discuss this unique phenomenon and talk about the Moon’s past, present and future.

To schedule an interview go to:

Houston, We Have A Podcast

Listen as Lovell and Haise remember the fateful mission from their perspective 50 years later and reflect on the highlights of their expansive careers and share wisdom gained from their famous mission on its 50th anniversary. Houston, We Have A Podcast is the official podcast of NASA’s Johnson Space Center, in Houston.

This searchable Apollo 13 website is a NASA-funded project designed by NASA contractor Ben Feist that provides viewers with access to all of the photographs, film, transcripts and audio from the mission. Visitors can replay the mission in real time or scroll through to find highlights. The site includes more than 17,000 hours of audio recorded from the various positions at mission control. It also includes video from NASA press conferences as they occurred, as well as newly audio-synched, previously silent, mission control footage.

Most of the Apollo 13 flight control team audio tapes were digitized in cooperation with the University of Texas, Dallas. Five additional tapes were found with the help of the National Archives and were digitized earlier this year by NASA.

These TV transmissions are film recordings of television transmissions, or kinescopes, transferred onto broadcast videotape, then converted to digital files and posted to Johnson’s Internet Archive collection.

NASA makes imagery available in many formats and resolutions, and NASA’s Image and Video Library contains many items related to Apollo 13. Apollo 13 images also are available on the Apollo Lunar Surface Journal, a volunteer-created site managed by NASA’s History Office.

Download and adapt these presentation slides about Apollo 13 to your audience and setting. The notes section for each slide contains the image source and explanations.

Additional Apollo audio and video resources are available for download in the highest resolutions available in this publicly curated collection on the Internet Archive. Additional resources related to all the Apollo missions are available at NASA’s Apollo 50th Anniversary website.

As NASA marks the anniversary of Apollo 13, the agency is progressing with its Artemis program, which will send the first woman and next man to the Moon by 2024, and establish sustainable exploration with its commercial and international partners by 2028. What we learn on during sustained operations on the Moon will prepare us for the next giant leap – sending astronauts to Mars.