NASA has good news after SpaceX suffered an accident that destroyed a Crew Dragon mockup before it could complete a parachute test, indicating that the anomaly could have minimal impact on the spacecraft’s Demo-2 astronaut launch debut.

According to NASA, SpaceX and the space agency are still working to launch astronauts on Crew Dragon as early as “mid-to-late May”. While two recent challenges – the loss of the spacecraft’s most important parachute testing mockup and an unrelated in-flight rocket engine failure – could both singlehandedly delay Demo-2 in certain scenarios, NASA continues to state that a May timeframe is still in the cards. This is an excellent sign that both issues – as previously speculated on Teslarati – are probably much less of a problem than they otherwise could be.

As of now, all Demo-2 hardware – including Falcon 9 booster B1058, a new Falcon upper stage, Crew Dragon capsule C206, and an expendable Dragon trunk – are all believed to be in Florida and technically ready for flight. Waiting for launch at and around Kennedy Space Center (KSC) Launch Complex 39A, the long straw for SpaceX’s inaugural astronaut launch is most likely the completion of formal paperwork and reviews, most of which must be done primarily by NASA employees. SpaceX’s latest technical challenges certainly toss some uncertainty into the mix and serve as a reminder that nothing can or should be taken for granted in human spaceflight but on the whole, there is reason for optimism. 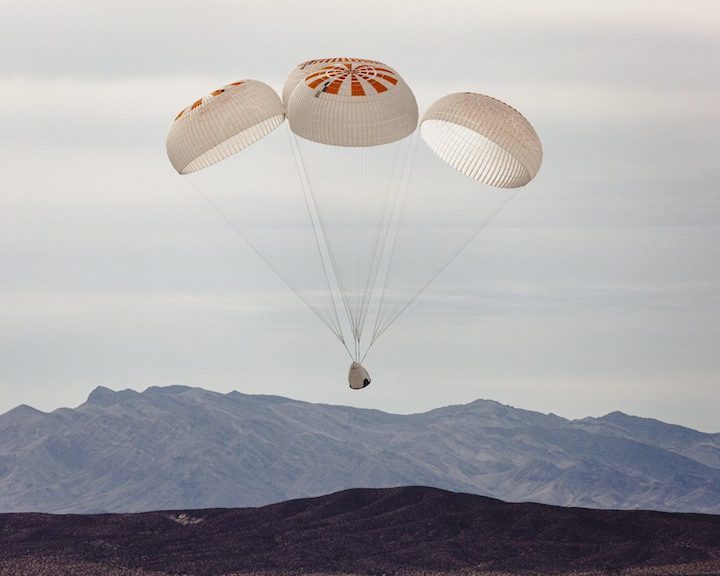 SpaceX began a final round of Crew Dragon parachute testing in January 2020 after a string of successes in Q4 2019. The capsule mockup pictured above was unfortunately destroyed during a helicopter-related incident in March. (SpaceX)

“To date, SpaceX has completed 24 tests of its upgraded Mark 3 parachute design they are working to certify for use on the Crew Dragon spacecraft that will fly NASA astronauts to the International Space Station. The system was used during the SpaceX in-flight abort test in January.

On March 24, SpaceX lost a spacecraft-like device used to test the Crew Dragon Mark 3 parachute design. The test requires a helicopter to lift the device suspended underneath it to reach the needed test parameters. However, the pilot proactively dropped the device in an abundance of caution to protect the test crew as the test device became unstable underneath the helicopter. At the time of the release, the testing device was not armed, and a test of the parachute design was not performed.

Although losing a test device is never a desired outcome, NASA and SpaceX always will prioritize the safety of our teams over hardware. We are looking at the parachute testing plan now and all the data we already have to determine the next steps ahead of flying the upcoming Demo-2 flight test in the mid-to-late May timeframe.”

While the challenges SpaceX and NASA still have to surmount are thus significant, it’s safe to say that Crew Dragon’s track record more than earns it some optimism as the spacecraft nears the T-1 month mark for what will arguably SpaceX’s most significant launch ever.

Following a successful Pad Abort test in May 2015, the company spent several years working head down. In mid-2018, SpaceX’s first finished Crew Dragon spacecraft successfully passed through electromagnetic interference (EMI) and thermal vacuum (TVac) testing, arriving at the launch site for preflight processing by July. Unfortunately, for unknown reasons, it took more than half a year more for NASA to finally permit Crew Dragon to launch.

A month and a half after completing an integrated static fire test at Pad 39A, Falcon 9 and Crew Dragon lifted off for the first time ever on March 2nd, 2019. A flawless launch was followed by an equally flawless International Space Station (ISS) rendezvous and docking, completed autonomously and without issue on SpaceX’s first try. Crew Dragon capsule C201 spent five days at the station before autonomously departing, reentering Earth’s atmosphere, and gently splashing down in the Atlantic Ocean under four healthy parachutes.

Altogether, Crew Dragon’s orbital launch debut was such a flawless success that SpaceX’s own director of Crew Dragon mission management stated that he could barely believe how perfectly it went – likely expecting at least something to go slightly awry. That near-perfection certainly didn’t come easily for SpaceX. Boeing – NASA’s second Commercial Crew Program (CCP) partner – has had a far rougher go of things despite the fact that the company does technically have extensive experience building aircraft and rockets.

In November 2019, Boeing completed Starliner’s first fully integrated ‘flight’ test in the form of a pad abort. While the spacecraft was able to perform a soft landing, mishandling and bad quality control caused one of its three main parachutes to fail to deploy in an unintentional stress test. A little over a month later, a separate Starliner spacecraft performed its inaugural orbital launch on a ULA Atlas V rocket. From the moment Starliner separated from Atlas V, things began to go wrong. It would ultimately become clear that extremely shoddy software and an almost nonexistent integrated testing regime caused the spacecraft to waste most of its propellant and resulted in an extremely delayed orbital insertion.

While NASA and Boeing both managed to forget a second partial failure until media reporting shed light on it months later, it also turned out that another entirely separate instance of incomplete software may have nearly destroyed Starliner a matter of hours before it was scheduled to reenter Earth’s atmosphere. The spacecraft was ultimately prevented from even attempting a space station rendezvous, one of the major purposes of the test flight.

In simpler terms, Crew Dragon – even with the challenges it has and will soon face – is just shy of primed and ready for flight. As always, it’s better to be safe (and late) than sorry in human spaceflight, particularly the first such mission for SpaceX, but it’s looking increasingly likely that Crew Dragon will be on the launch pad and preparing to lift off with NASA astronauts just two or so months from now.