But that's not possible politically at the moment. 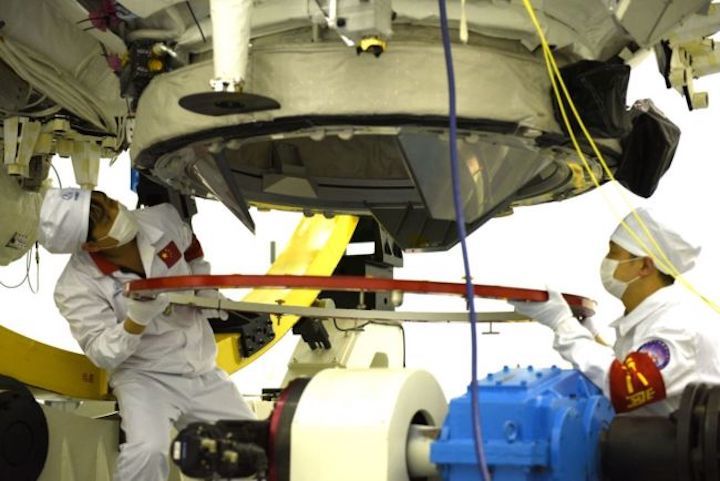 A next-generation crew spacecraft that China is preparing for a flight test this spring appears to be capable of docking with the International Space Station (ISS).

NASA, the European Space Agency and Russia's federal space agency, known as Roscosmos, use IDSS-compatible systems or adapters. These are in use on the ISS to facilitate rendezvous and docking with spacecraft.

The new spacecraft is designed to boost China's capabilities in sending humans into orbit, reduce costs through partial reusability and allow astronauts to survive the radiation environment and high-speed reentries of deep-space missions.

A prototype of the next-gen crewed spacecraft is being prepared for a test flight at the Wenchang Satellite Launch Center. Launch on a Long March 5B rocket is expected in mid- to late April.

The IDSS docking mechanism is androgynous. A first such system was developed and used for the 1975 Apollo-Soyuz Test Project, meaning neither the U.S. nor Soviet spacecraft had "male" or "female" mechanisms.

China has demonstrated rendezvous and docking capabilities with Shenzhou crewed spacecraft and the Tiangong-1 and Tiangong-2 space labs, as well as with the Tianzhou cargo spacecraft.

The rendezvous systems on spacecraft, which facilitate the maneuvering and matching of vectors and velocities for close approaches, may, however, need to be adapted to be compatible.

But even if the new Chinese crewed spacecraft can technically rendezvous and dock with the ISS, it is currently not possible politically.

While China cooperates with ESA and Russia, the United States has effectively excluded China from the ISS project. The US government in 2011 introduced text into legislation, referred to as the "Wolf Amendment," that severely restricts opportunities for NASA and other agencies from bilateral cooperation with entities linked to the Chinese government.

The test flight of the new spacecraft will also test China's Long March 5B launch vehicle. If successful, the new rocket will subsequently be used to launch the 20-metric-ton modules of the Chinese Space Station.