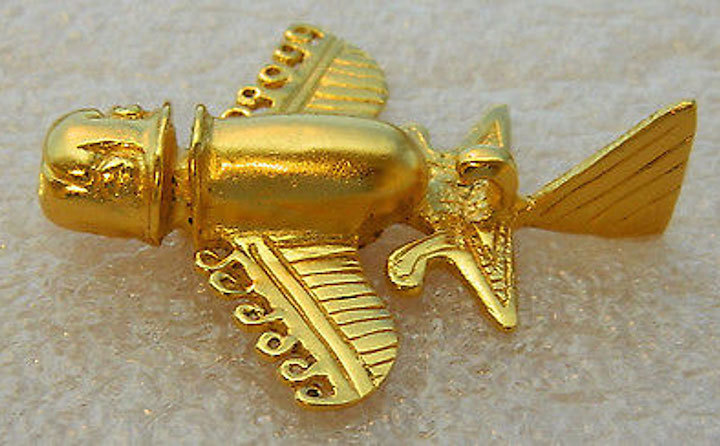 A look at some of the ancient artworks and artifacts that the show Ancient Aliens gets totally wrong.

Today we're going to wrap up our mammoth undertaking of debunking perhaps the worst offending series in the history of television, Ancient Aliens, which graffitis vast swaths of human history with a thick coat of falsehood. In Part 1 we covered some of the ancient texts that the show has misrepresented; last week in Part 2 we looked at some of the ancient human sites that the show falsely claimed were built or influenced by aliens; and this week, we're going to wrap up with a handful of ancient artifacts and artworks that Ancient Aliens claims are proof of alien visitation.

Our first stop today will be the ancient Maya:

On the show, Erich von Däniken describes a stone carving of a reclining figure:

You see his upper hand, he is manipulating some controls. From the lower hand, he is turning something on. The heel of his left foot is a kind of pedal and, outside of the capsule, you see a little flame. This is incredible. This is absolutely proof of extraterrestrials.

The image is of King Pakal who died in 683 CE, depicted on the lid of his own sarcophagus. Note that in real history, Pakal did not fly off into space, he died; which is why his sarcophagus (which contained his still-Earthbound body) showed him descending into the underworld instead of flying away to the stars. The image is iconographically very typical of Mayan funerary art; its principal image is the World Tree, which is what von Däniken took for a rocket. The rest of the imagery shows the funerary serpent transporting Pakal to the realm of the dead. This is all exactly what we'd expect to see on a King's sarcophagus.

If you prefer to conclude that Maya scholars cannot correctly interpret their own cultural art and that von Däniken is the one who was right, recall that he had never visited Mesoamerica and had never studied the Maya or — anything — having dropped out of a Catholic school as a teenager in Switzerland. Hard as it may be to believe for some, today's Maya actually do understand their own history and culture.

We're all familiar with the large geoglyphs made in the Peruvian desert, some of which are more than a kilometer long. More than 70 are of animals, hundreds more exist too. But the ones of interest to Ancient Aliens are the majority which are just straight lines. Totaling some 1,300 km, the longest individual line stretches some 20 km. Some are narrow as sidewalks, some are wider than freeways; many are much wider at one end and taper almost to a point at the other. They criss cross and extend in all directions.

Looking at Nazca from the air, it looks like an airport. It really does, because you have all these bands, wide bands, that look like airstrips that are laid on top of each other, but you also have these gigantic, long straight lines that go for miles and miles over valleys, over mountains.

It's true they're straight but not flat, they follow the natural contours of the land. So it's not clear why Ancient Aliens repeatedly asserts that they are runways. Even assuming alien spaceships required runways — or, at a minimum, lines to guide them visually into an approach — these would be terrible. They're far fainter than all the natural geographic structures around them, and the region where they're located is a completely jumbled mess of them. The truly skeptical mind should not be forced to conclude that "runways for aliens" is the most likely explanation for the lines, when even Ancient Aliens is happy to let all the other geoglyphs mixed in with them just be interpreted as Nazca art.

Around 1000 CE, the Quimbaya civilization in what is today Colombia made a number of golden objects, about 5-8 cm long, which Ancient Aliens claims are models of spaceships and fighter jets:

There is not a single insect in the world which has got its wings at the bottom. Now, when you exclude the possibility that it's an insect, one of the things which remain is the fact that this is actually — yes, what it looks like — a plane.

Several dozen of these pieces are on display at the Museum of Gold in Bogotá. All represent highly stylized depictions of local animals: birds, lizards, amphibians, insects — and one other type of animal that has a single vertical tail fin, and which Ancient Aliens tells us that, by process of elimination, we're forced to conclude is an airplane. The type of animal they forgot to consider, however, that has a vertical tail fin, is a fish. Fish also have pectoral fins, that Ancient Aliens says must be wings. If the complaint is that these golden sculptures cannot be the types of animals they're intended to be because the proportions are all crazy, well that's also the case with the more easily identifiable ones. But a crazy-looking golden frog doesn't look like it could fly so well, so Ancient Aliens allows that one to just be a frog.

In Egypt there is this underground crypt at Dendera that was always secret and only the high priests had access to that crypt. It is very hot in there, very narrow, low ceiling, and on the walls you have these reliefs of what looks like ancient light bulbs... According to most mainstream archaeologists, torches were used by the ancient Egyptians to light the pitch black chambers of tombs and temples. Yet nowhere on the ceilings is there even the slightest evidence of soot or smoke residue.

The claim that Egyptians must have used electric lights is supported only by this one relief (which is actually depicting lotus flowers) and the idea that there's no soot on the ceilings from torches. I'm going to let Chris White answer that, in his film Ancient Aliens Debunked:

It's hard to know why they are saying this because there is black soot in almost every Egyptian temple and tomb. In fact a recent ceiling cleaning conducted at the Temple of Hathor, which is the same temple where the so-called light bulb relief is found, they uncovered a brightly colored ancient ceiling painting that had never before been noticed. What was covering it up you ask? I will quote them directly, they said the ceiling was covered with "hundreds of years of black soot." That's kind of funny, you have to admit.

Beyond the obvious fact that these tombs were built thousands of years before the discovery of electricity or the invention of the electric light, we have one other fairly obvious piece of evidence that the tombs didn't have light bulbs or wiring. That's that we can go into them today, and see that they don't.

OK, one final ancient artwork for you:

The various crystal skulls in the world — human skulls carved out of quartz crystal, most of them somewhat smaller than actual size — have always puzzled me as evidence of alien visitation. If we were to visit an extraterrestrial civilization, would our greeting to them be to mine one of their minerals and use our advanced technology to carve it into the form of some random piece of their anatomy? The whole idea boggles the mind. But fear not: Ancient Aliens provides us a rationale:

They were created specifically to hold records from alien civilizations. There was a legend that there were 13 skulls and that when the 13 skulls come together then something significant will change in the world... Legend suggests that there are 12 additional worlds out there – planets which are inhabited by intelligent species. These 13 crystal skulls that allegedly exist on planet Earth were each brought here from one of those 12 planets.

There is a complete Skeptoid episode on the most famous of these, the so-called Mitchell-Hedges skull, episode #98. This is the same one that Ancient Aliens spends most of its time talking about. But it is indeed one of thirteen. In the 1870s, craftsmen in Idar-Oberstein, a town in Germany that specializes in gemstones, bought a shipment of Brazilian quartz, which were then carved into skulls. Between three and thirteen were bought by art dealer Eugene Boban, which then made their way into galleries with various grandiloquent and illustrious false provenances attached to them, and the Mitchell-Hedges skull was one of these. But the interesting thing is how we know for a certainty that Idar-Oberstein was the origin of the skulls, and not as memory storage devices for space aliens.

There's actually quite a lot of evidence telling us the origin not only of the stone from which a crystal skull is carved, but also of where and when it was carved. The stone itself can of course be geochemically and isotopically analyzed, as can bubbles of vapor and liquid trapped within the quartz as it cooled, pinpointing where in the world it came from. The characteristics of the cut and polish marks tell us that mechanical rotary tools were used, and we can also look at occlusions of the grit used on the tool and of the water used in the polishing process, both of which remain in those tool marks. Always remember that how we know what we know is always the most fascinating story of all.

Ancient Aliens is, at its core, a slap in the face to the ingenuity of the human race. It charges that humans were not smart enough or industrious enough to build great works and great art, and therefore the explanation for the existence of these things must be alien intervention. But, even more than that, Ancient Aliens incisively focuses its attack on human populations of color. It's always the brown people of Mesoamerica or the Indus Valley who needed alien help; never the white Greeks with their exquisite Parthenon built 1000 years earlier than Puma Punku. Professor of Archaeology Ken Feder summed up Ancient Aliens' contempt for human achievement in his book Frauds, Myths, and Mysteries: Science and Pseudoscience in Archaeology:

I realize that for some of you I'm being mean, snarky, and inflexible on this topic. And you'd be right. But in the face of a program and, at its core, a philosophy that is based on assumptions that degrade and diminish the inherent human capacity to invent, create, build, cooperate, and rise to the occasion to solve great technological challenges, both in the present and in the past, I maintain that meanness and inflexibility are entirely appropriate responses.

And so, in the spirit of what Dr. Feder suggests, let's call out Ancient Aliens for what it is: An assault not just on our intellect and on our ancient history, but on you and your fellow humans directly. Don't stand for it, and don't watch it.