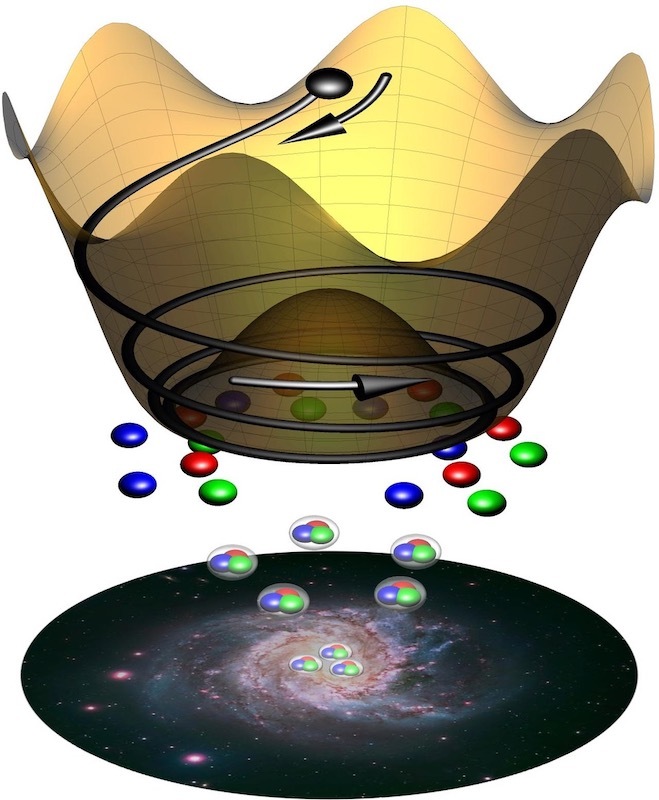 ANN ARBOR—A hypothetical particle called the axion could solve one of physics’ great mysteries: the excess of matter over antimatter, or why we’re here at all.

According to the Standard Model of particle physics, when our universe was born, the meeting of matter and antimatter should have annihilated each other. That means that nothing—no Earth, no sun, no galaxies, no humans—would exist. But we do.

“There’s a clear contradiction with the Standard Model,” said University of Michigan physicist and postdoctoral researcher Raymond Co. “Why is the whole universe filled with matter, and very, very little antimatter?”

But there are a few contradictions within the Standard Model, one of them being the imbalance between matter and antimatter. The Standard Model also does not explain the existence of dark matter, nor does it explain an observed property of neutrons.

To solve the neutron problem, physicists in 1977 proposed a hypothetical particle called the axion. Five years later, the axion was found capable of solving the problem of dark matter as well. Now, Co and co-author Keisuke Harigaya, a researcher at the Institute for Advanced Study, are suggesting that the axion may explain yet another problem: the imbalance between matter and antimatter. Their research will be published in Physical Review Letters on March 17.

The hypothetical particle axion is infinitesimally light—at least billions of times lighter than the proton, and almost does not interact with normal matter. This explains why they have not yet been detected, even with instrumentation that allows us to detect protons, neutrons and electrons.

The axion was first hypothesized to address a contradiction called the strong CP problem. As you may have learned in high school physics, electrons have a negative charge, protons have a positive charge and neutrons have no charge. However, neutrons are made up of more elementary particles called quarks, which do have charges. So physicists expect neutrons to interact with the electric field, Co says. But they don’t. If the axion exists, it would turn off the interaction between the neutrons and the electric field, solving the strong CP problem.

The axion may also be a good candidate for dark matter, which is used to explain the rotational speed of galaxies, another contradiction of the Standard Model. If galaxies rotated at the speed at which they currently rotate, with the amount of gravity they have based on luminous matter—matter we can see because it emits light—they would fly apart. There’s just not enough gravity to hold them together. Scientists suggest there must be a huge amount of matter—such as a vast field of axions—in galaxies we cannot see that explains galaxies’ rotational speed.

Now, Co and Harigaya are suggesting that the axion can also account for the imbalance of matter and antimatter. Previously, physicists thought that in the early stages of the universe, just after the Big Bang, the axion field was initially static and started to oscillate as the universe cooled.

Instead, the researchers suggest that the axion field had more interesting dynamics in this early stage. Picture the plastic soda bottle, Co says. Before rolling back and forth along the bottom of the bottle, the axion was spinning in a circular pattern around the bottle’s body. Co and Harigaya suggest that through the interactions provided by the strong force and the weak force, the rotation of the axion creates just a tiny bit more matter than antimatter. When matter and antimatter come together, instead of annihilating completely, one in 10 billion parts of matter was left to form the world we see today.

“People always want to know why we’re here and that’s the matter-antimatter asymmetry—in the technical sense,” Co said. “And what is exciting in our work is that the axion gives simultaneous explanation to all three problems in particle physics: dark matter, matter-antimatter asymmetry and the strong CP problem. Since these problems haven’t been studied simultaneously in this axion framework, a lot of work needs to be done on this topic. Most remarkably of all, this axion framework will be put to experimental tests in the near future.”

Future related work could include research on gravitational waves and the origin of the neutrino mass.